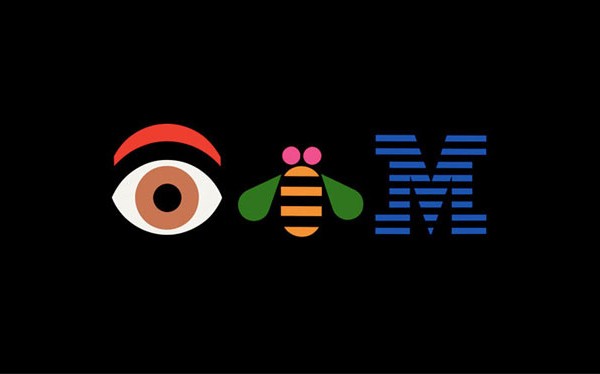 In researching Paul Rand’s design for the corrugated IBM box with the minimalist grid, I was reminded of Rand’s celebrated eye-bee-M logo.

Rebus puzzles can be a fun, but using a riddle as your brand’s trademark might be a terrible idea for all kinds of reasons.

1. Rebus puzzles are a very oblique form of communication. To explain what I mean by that, I could either list their pros and cons. Or I could show you a picture of some golf-pros + some convicts.

Norm Blumenthal created the rebus puzzles used in the 1960s TV show, Concentration. He created the “con-cent-tray-shin” rebus above. Phonetically amusing, but never meant to serve as logo for the show, although they did, at times, employ an indecipherable “mystery logo.” (See: casually interlocking logotypes)

Even “The Rebus Show” on ABC (short-lived as it was) had the good sense to use something more legible than a rebus puzzle for its main logo. 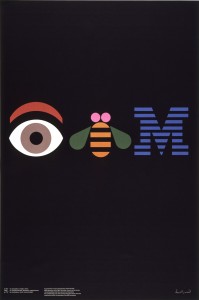 Certainly some thinking is required to correctly parse “eye-bee-M” since rebus puzzles don’t generally say what they mean, relying instead on sound-alike words.

As a company that started out selling business machines (and not eyeballs or bee hives) IBM did not immediately embrace the rebus concept and worried that it might tend to dilute their “brand identity.”


… Paul Rand tested the limits he, himself, had imposed through comprehensive identity documents and ruling with an iron fist as the official gatekeeper of IBM’s identity, when he attempted a rebus of the logo for an in-house event poster and faced opposition from management, who went as far as prohibiting the distribution of the poster.

In the small type at the bottom of this poster, we are given a less arbitrary rationale for the eye, the bee and the “M” in the form of an acrostic corporate poem: 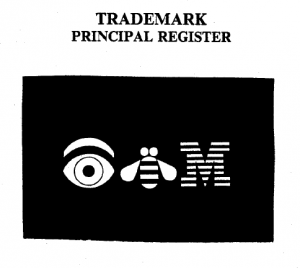 It’s doubtful Paul Rand had these particular justifications in mind when he designed IBM’s rebus logo and he certainly never intended it to replace the official IBM logotype.

Nevertheless, it is among IBM’s registered trademarks. (See it at the end of a recent short commercial below.)

Also worth noting: this was not Rand’s only rebus logo. See also: CADC and AIGA.

(8 more rebus logos, after the fold…)

All one really needs to correctly parse (aside from an abbreviation of New York) is a pictogram of a heart. Conditioned as we are by Valentines Day, it’s not such a mental leap to get “love” from ♥.


The biggest problem with this logo, might be just be its popularity.

In the 36 years since the designer Milton Glaser came up with the logo to help boost New York’s sagging mid-’70s image, the state has filed thousands of trademark objections and cease-and-desist letters. Last year alone, a state official said, more than 100 letters were sent.

Many go to vendors who use the whole logo without permission. But the state has also gone after the makers of “I ♥ Yoga” T-shirts and “I ♥ Paris” bumper stickers. After Sept. 11, when Mr. Glaser designed an “I ♥ NY More Than Ever” logo with a smudge on the heart, the state even threatened to (but did not) sue him, Mr. Glaser said.

5. One problem with rebus logos, is that the same basic pictograms so often reappear. Consider Cutwater’s 2012 rebus logo for LensCrafters…

It’s almost a mash-up of the two aforementioned rebus logos. Granted, an “eye” has more relevance to vision care, than it does to the letter “I” of IBM.  Although the LenCrafters rebus “eye” has a double meaning and still means “I” in the I ♥ NY sense of the word. And LensCrafters is abbreviated in Cutwater’s logo, just as “New York” was in Glaser’s logo.

We created a logo that was likable and human to reinforce that LensCrafters was excited about helping people with the gift of sight.

The eye and the heart also appear as balloons in a TV commercial. (Note: Rogue Wave’s 2007 song “Lake Michigan” is the soundtrack)

6. The I-heart-NY logo may have also influenced other municipalities to consider a rebus logo… 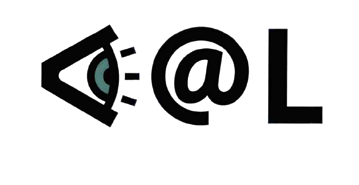 Hornall Anderson’s 2001 “Soak it Up” logo for Seattle was another rebus logo beginning with a pictogram eye. In this case, however, the eye is a sideview and we’re meant to interpret the symbol as “see.”

In 2001… the city decided to upgrade. It created a new logo: a rebus that featured an eyeball, the “@” symbol, and the letter “L” (pronounced “See-at-L”)… Years later, a former C.E.O. of Seattle’s Convention and Visitors Bureau… admitted that one of the logo’s several problems, beyond simply not resonating with people, was that it never told anyone anything unique about the city.

The use of an email @ symbol points up another trend that’s still contributing to a recent resurgence of rebus branding.

As “txtng” abbreviations became more widely used and understood, many brands attempted to cash in on the supposedly high-tech cachet they impart. New brand names like 2b bebe  W;nk, i2, and Göt2B use a mixture of numbers, letters & punctuation marks, as if they were trying to create some hack-proof password for their brand.

Maybe playing hard to get is a genius branding strategy. Or maybe it’s a bad thing to let rebus puzzles and de facto passwords create a firewall of incomprehension between a brand and its potential customers.

7. The Dunkin’ Donuts rebus logo (above) is by Sterling Brands. 2 pictograms, 1 word and an abbreviated “DD” brand logo.

Not really designed to stand on its own, it always includes the tagline/spoiler “AMERICA RUNS ON DUNKIN’®.”  If it’s a puzzle, it’s not really too puzzling since the answer is spelled out right below.

Appearing towards the bottom of their coffee cups, the rebus trademark looks like a consolidated row of social media icons. 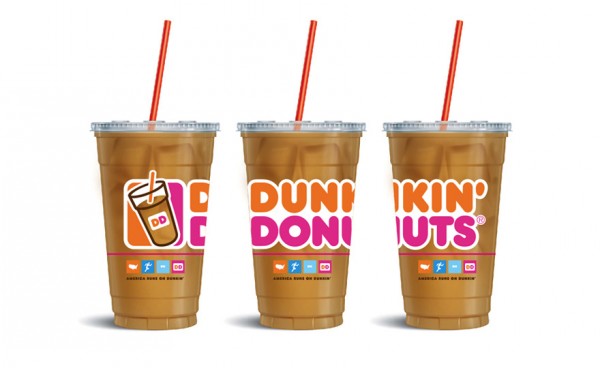 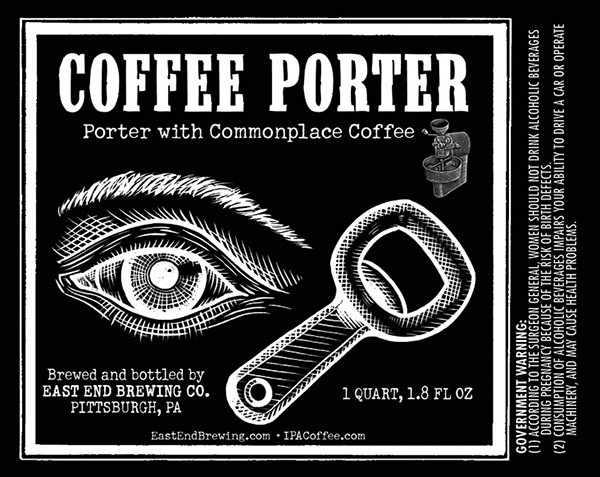 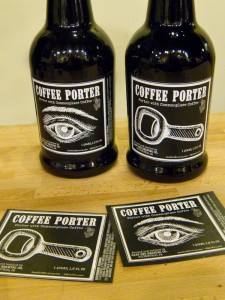 8. Speaking of coffee, consider the case of East End Brewing Company’s “Coffee Porter” label with a rebus product logo (by Wayno) consisting of an eye and a bottle opener…

The name… originally submitted [“eye opener”] didn’t meet with the government’s approval — they feared it might be interpreted as a health claim — but it’s very cleverly shown in the rebus illustration on the label. Sneaky, aren’t we?

The Federales rejected our original design for East End Brewing Company’s Coffee Porter. They decoded our “eye opener” rebus, and decided that it could be construed as a health claim.

Using a rebus puzzle to trick the Food and Drug Administration, might have seemed like a good work-around, but it’s not nice to fool the FDA (with a rebus logo).

Still, kudos to Wayno for recognizing the power of an incomplete package to create a larger, whole message.

9. Wolfgang Schmidt’s use of rebus style statements in promotions for Vitsœ points up another limitation of rebus logos. Rebus puzzles seldom translate properly to another language.

There’s an old German saying that translates to “Something has a hand and foot”—meaning it is thoroughly thought-out and developed. Vitsœ, the company Niels Vitsœ and Otto Zapf founded in 1959 to bring Dieter Rams’s designs to market, embodies that philosophy, from its furniture to its packaging and its promotional materials (which often feature a hand and foot symbol designed by Wolfgang Schmidt).

Not being familiar with the German saying cited above, I am not well equipped to understand Schmidt’s rebus.

10. In 1985 IKEA used a rebus to assist Americans with the correct pronunciation of their brand name. 2 pictograms and an interjection in English. Not so much a “rebus logo,” as a phonetic rebus caption beneath IKEA’s logo.

A reverse of the hierarchy used by Sterling Brands’ rebus logo for Dunkin’ Donuts. How come?

For potential American consumers in the 1980s, the IKEA brand name was already something of a puzzle. Here, the rebus is offered as a solution to the brand’s puzzling pronunciation. (via: Sara Kristoffersson’s Design by IKEA: a Cultural History)

Conclusions? Rebus logos work best when they’re short. A good trademark has a more singular impact. And the more pictograms that you string together, the more your logo looks like a desperate phalanx of social media badges.