To wit, the following 10 examples…

I found the earliest example in this 1852 anti-slavery tract entitled, “The Square Egg.” (As with many such pamphlets, the author used a pseudonym.)

It starts out as a parlor room anecdote supposedly told by “that wonderful critic, Dr. Samuel Johnson.” In chapter I, “Johnson” tells us that visiting a poultry-yard, he found “a large number had collected there to see a square egg… it was perfectly square, white and beautiful, and all the spectators admitted that so far as appearances went there was no fraud.”

But, eventually (on page 5), the author reveals that the square egg, is a fraud, after all. (“a cunning invention of the farmer’s son to enable his father to pay his taxes.”

The pseudonymous writer then takes a rhetorical left turn and spends the remaining 2 chapters defining “square egg” as a metaphor for a series of “cheats.” That last of these cheats, being The Fugitive Slave Act…

There never was probably a time when so many square eggs were in the market as now; and what is most remarkable although, they are very badly manufactured, it is impossible for some men to see the cheat…

The Fugitive Slave Law is a square egg.

The old hen that deposited this egg, we are told, was the Constitution of the United States. Many doubted and even now deny this eminent parentage for this square egg, for the same hen has produced the most beautiful oval eggs the world ever saw; and it is strongly suspected that this square egg was deposited under the hen by some designing persons and brought forth under false pretences and for selfish purposes…

Over this square egg the democrats and whigs shook hands with DEVILS, and ratified a compact, at which Justice frowns and Humanity shudders. It was fit that some deformity of nature should be the emblem of such a deed. We have heard of a piratical tribe, who swore fidelity, in their deeds of blood, over the symbol of a “stony heart.” As the two great parties would think this a cruel metaphor, we thank Dr. Johnson for having enabled us to set forth their abominations under the milder image of a “square egg.”

Newspaperman J. E. Rockwell published an article entitled “Some Lumberjack Myths” in the February 1910 issue of The Outer’s Book.

A strange bird, called the “Deep-Winter-Flying-Midget,” made its home on the Little Onion Mountain. The bird used to frequent Paul Bunyan’s camps, and the cook always kept it supplied with food. It would lay its eggs right out on the surface of the snow. Cold, instead of warmth, hatched the eggs. To prevent the eggs rolling down the mountain side, the midget always laid square eggs.

Mythical bird given name change; lumberjacks use its square eggs as dice

Rockwell was first to introduce a square-egg-laying bird into the Paul Bunyan bestiary. But later writers of Paul Bunyan stories (starting around 1941) changed the bird’s name.  From “Deep Winter Flying Midget” to “Gillygaloo.” Also: the “gigantic gilly grouse.”

Why did Rockwell’s bird lay square eggs? As an evolutionary adaptation to living on a mountain slope. Later versions of this myth, however, added an additional claim: that lumberjacks would hard boil the square eggs and and use them as dice.

A bird which nests on mountain slopes and lays square eggs, which lumberjacks use as dice.

In 1921, architect/journalist George S. Chappell published a travel parody (using the pseudonym Walter E. Traprock) entitled, The Cruise of the Kawa: Wanderings in the South Seas.

“The marking of the eggs is most curious”

As you can see, Traprock’s “Fatu-Liva” bird’s eggs have the same dice-like aspect as the Paul Bunyan Gillygaloo. Although, I can’t say for certain, it seems like Chappell’s Fatu-Liva birds got there first, their having “quaint” (dice-speckled) markings.

It was the most unearthly and at the same time the most beautiful bird-song I have ever heard.

“What is it?” I asked, as the cry resounded again, a piercing screech of pain ending in a long yowl of joy.

“It is the motherhood cry of the fatu-liva,” he said. “She has just laid an egg.”

“But why the note of suffering?” I queried.

“The eggs of the fatu-liva are square,” said Whinney, and I was silenced…

The Nest of a Fatu-Liva

This is without question the most extraordinary picture which has ever been taken of any natural history subject. It corroborates in most convincing manner the author’s claim to the discovery of the wonderful fatu-liva bird with its unique gift of laying square eggs. Here we see the eggs themselves in all the beauty of their cubical form and quaint marking… Skeptics have said that it would be impossible to lay a square egg. To which the author is justly entitled to say: “The camera never lies.”

It was by the rarest good fortune that Dr. Traprock was able to secure what is probably the only living specimen now in captivity of the hitherto unknown fatu-liva bird. Immediately upon his arrival at Papeete efforts were made to secure a mother bird of any kind which would hatch out the four fatu-liva eggs, then in the explorer’s possession. Owing to their angular and uncomfortable shape it was found impossible to keep a bird brooding for more than three minutes at a time. After much effort one egg was finally hatched from which was derived the handsome specimen shown in the illustration. The youngster is now doing finely in the Bronx aviary. Unfortunately he is a male, so that his hope of posterity rests entirely upon the success of another expedition to the Filbert Islands.

“Saki” was the pseudonym for writer Hector Hugh (H.H.) Munro. (Funny how many “square egg” authors used pseudonyms.) Here, as in Hiram Plover’s The Square Egg, the object of the exercise is again a swindle, although Saki’s short story takes place during WWI.

In the estaminet of the Fortunate Rabbit I found myself sitting next to an individual of indefinite age and nondescript uniform who was obviously determined to make the borrowing of a match serve as a formal introduction and a banker’s reference. He had the air of jaded jauntiness the equipment of temporary amiability the aspect of a foraging crow taught by experience to be wary and prompted by necessity to be bold he had the contemplative downward droop of nose and moustache and the furtive sidelong range of eye-he had all those things that are the ordinary outfit of the purse-sapper the world over.

Rather than quote more of the story, I include the video above with WWI imagery and a narrator reading the entire (short) story. If you start around 6:36, you can hear the entire “square egg” hustle, which the writer deftly sabotages with the very last line.

The author himself told in an interview in 1962 that “My best story, technically, is probably the square egg one.”

Similar to George S. Chappell‘s 1921 The Cruise of the Kawa (see: #3), Olive Oyl discovers a nest of square eggs on a tropical island and expends considerable effort to hatching them.

And, as with many of our other examples (shown above and below), the writer here also promotes the practical and commercial benefits of square eggs. Everywhere, it seems, there are capitalists seeking to profit from square eggs. Citing benefits such as: saving space in the refrigerator, making tidier sandwiches on square bread and allowing for more compact packaging. (see also: close-packing)

Wish I could have found a video of this episode, but: no such luck.

This episode of Green Acres sounds pretty similar to the Red Skelton skit aired one year earlier. (That I’ve never actually seen.) The farmer’s hen inexplicably starts to lay square eggs. And others take a financial interest. But, in this case, Oliver is suspected of fraud when the chickens he sold do not continue laying square eggs.

Spoiler Alert: It was all a dream.

British cartoonist Ronald Searle published his book (with the same title as examples #1 and #4) in 1968. Not every drawing in this darkly humorous portfolio of cartoons, features a square egg, but he liked the concept enough to use it for the book’s title.

More important was The Square Egg a collection in which the dangerous Searle of whom the public had been warned, first revealed his aggressiveness. …it was the themes of ‘cruelty, frustration, deformity, blindness’ — named by Searle in a sketch-plan of his thematic progress — that really dominated the book: the blind man who dreams of an eye, the man borne aloft by whipped butterflies. There was sickness and perversity in such jokes, but it belonged to man and not the jokes. Laughter was made as hurtful as Searle could presently make it because in laughter there was always hurt.

From a 2006 Bonhams London auction: the book on the far right shows an early version of his square egg bird

The Square Egg (1968) and more recent individual drawings is so relentlessly misanthropic as to be quite terrifying. 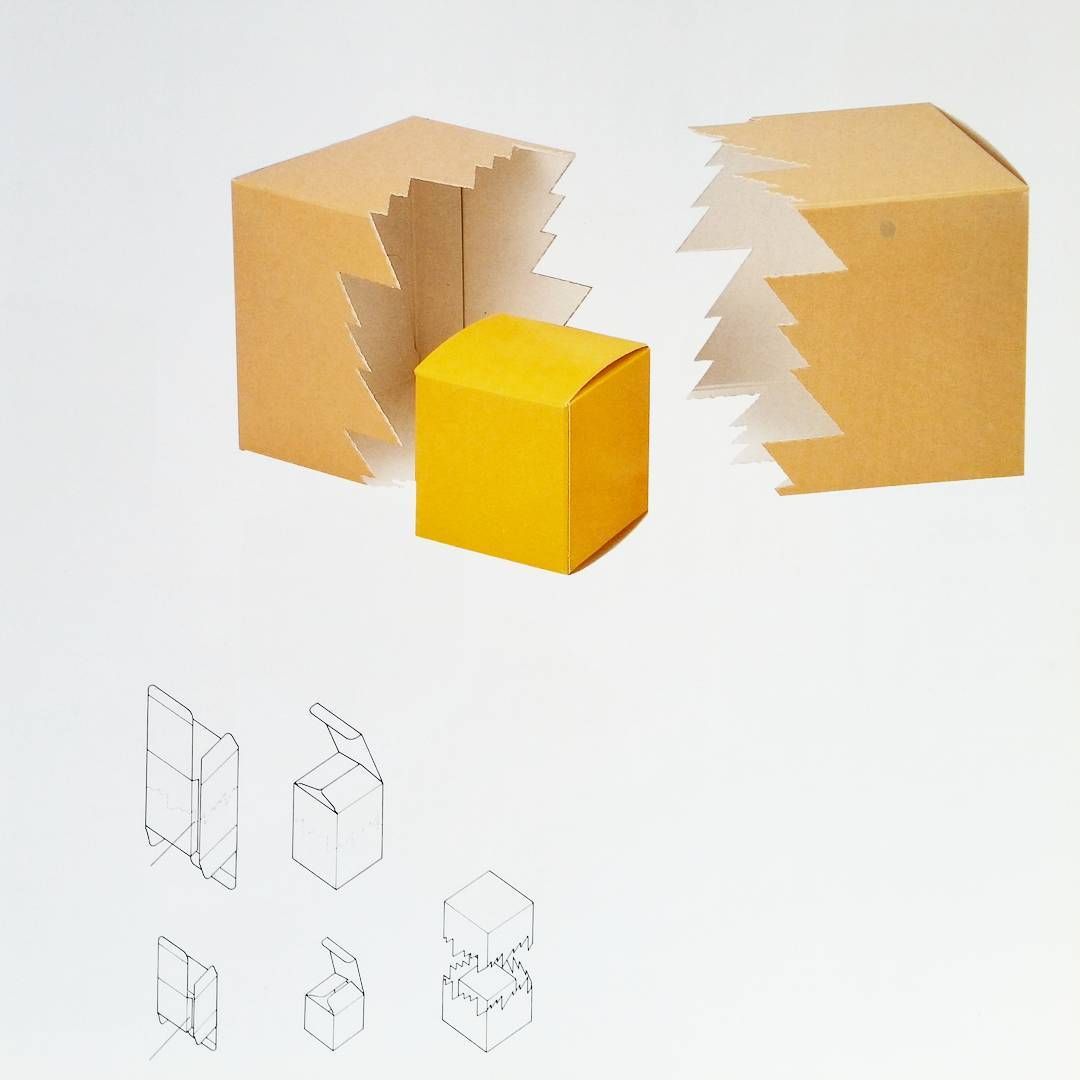 I wrote about Katsu Kimura’s work back in 2014. Was then focusing then on his “cigarette boxes” — closely related to my ongoing interest in “substantially square” versions of stuff that’s usually round. (e.g.: cigarettes, toilet paper)

I see now that my earlier post actually quoted a description of one of Kimura’s square egg boxes:

Designer Katsu Kimura creates packages that hold nothing but humor— boxes that mimic the things they ought to contain… A square “egg” box opens along a crack to reveal a little square yolk box inside.

Liza Crihfield Dalby
All-Japan: the catalogue of everything Japanese, 1984

Now that I’m researching it further, I see that Kimura made a whole series of square-egg artworks.

At first, I thought this was from a Japanese magazine, but, after translating the description, I realize it from the same book I wrote about in 2014.

Kimura’s cover for the 1984 cover of Graphis Packaging 4  (Note: the square egg-cup)

1972 – Designed the series “Box and Cox” in which he elaborated on the theme of the egg creating a cube out of paperboard with a zigzag border and revealing a smaller cube in yellow.

11. from the band named: The Square Egg

The Square Egg (the band) was active in Florida and New York, but have now apparently evolved into other, differently named line-ups. The wayback machine shows that an early domain address for the band was last active around 2001. From there, I learned that…

“the Square Egg” started as the musical collaboration of Brian Wolfe and Lee Williams. The two have been writing songs and performing together since early 1999.

The singer, Lee, now uses thesquareegg.com domain for his solo projects. He currently performs under the single moniker of “Lee,” although songs, CDs and downloads by The Square Egg are still available.

Personally, I’m drawn most to their jazzier, story-style songs. (I quite like their cover of Prince’s Joy in Repetition which was the first song I downloaded.)

Note: The Square Egg should not not be confused with Flies on a Square Egg, about whom I could learn nothing online, although they seem to release music in every imaginable style. (Maybe they record with an algorithm?)