Photograph by Howard Sochurek for Time/Life Pictures. (With permission of Getty Images.)

This box of S.O.S soap pads shows up in a number of news photographs documenting the impromptu “kitchen debate” between US Vice President Richard Nixon and Soviet Premier Nikita Khrushchev in 1959.

Nixon and Khrushchev paused to look at the kitchen, leaning against the white dividing railings. Lois Epstein, a perky brunette American exhibition guide, demonstrated how the typical American housewife might use the built-in washer-dryer. On top of the machine were a box of SOS scouring pads and a box of Dash soap powder. “In America, we like to make life easier for women,” noted Nixon. Khrushchev replied that “your capitalistic attitude to women does not occur under communism.”

Bee Wilson, Consider the Fork: A History of How We Cook and Eat

I first wrote about this version of the S.O.S box in July of 2009. It struck me as very modern and graphic. I had never seen the package design before and (at that time) could find no other examples of it online. One week later, however, I did manage to turn up some vintage ads that featured the same package in color.

Then last month, Mike Higgins, a history teacher in Wyoming, found one of the boxes on eBay and purchased it for $22. He generously shared his photos and scans of the box with us. This was a big deal because, aside from advertising images, it’s the only surviving example of the package that I’ve ever seen. As such, it’s just the kind of historically significant artifact that you might expect to see at the Smithsonian. (See also: Mike’s blog about the 25th Infantry Bicycle Corps)

General Foods acquired the S.O.S brand in 1957. They introduced their new logo and packaging in 1959, but replaced it just 1 year later with a redesigned version. How come? Unless someone comes forward with inside information, we can only speculate.

Maybe they conducted some market research proving that the package was insufficiently persuasive. Something similar had happened to a 1950 “modern” Wheaties package design. General Foods competitor, General Mills owns the Wheaties brand. Interestingly, both of these food producers had products that were featured in news photos of the “kitchen debate.” (more about that later)

Personally, I always thought the box looked very photogenic in black and white. And yet I’ve read that the “kitchen” was lemon-yellow, so I imagine the box must have matched the decor nicely. All of which makes me wonder what Sochurek’s photograph might have looked look like, if he had been using color film instead.

NEW PACKAGES By General Foods Corporation, White Plains, New York— for S.O.S. Interwoven Soap Pads. Introduced nationally. Yellow background of the package is retained. Brand name on front panel is in large white letters with each letter superimposed over a facsimile of a soap pad. Two different treatments of the back of the pack feature use of product in the kitchen and its application out of doors.

I like the way they printed the three “facsimile” soap pads in different overlapping colors. It also anticipates the Venn diagram MasterCard logo which appeared the following year.

It’s interesting what they did with the logo(s). That is to say: the designer made two versions of the logo. On most panels they used a horizontal logo with condensed “S.O.S” type against vertically oriented soap pads. While on the side panels they used a vertical logo with extended “SOS” type against horizontally oriented soap pads.

In 1917, Ed Cox … an aluminum pot salesman, invented a pre-soaped pad with which to clean pots. As a way of introducing himself to potential new customers, Cox made the soap encrusted steel-wool pads as a calling card. His wife named the soap pads S.O.S or “Save Our Saucepans.” Cox soon found out that the S.O.S pads were a hotter product than his pots and pans.

… The acronym, S.O.S., is the famous distress signal and could not be trademarked. By removing the last period, the name was unique and could then be registered with the United States Patent and Trademark Office.

Removing that last period, Cox also gave his trademark a bilateral symmetry. This makes “S.O.S” a more perfect palindrome. By removing both remaining periods in the vertical logo, its unnamed designer made sure that it was also symmetrical. As such, both logos function as a ambigrams and remain legible even when the box is upside down.

Much more about 1959 S.O.S “kitchen debate” box and its logo, after the fold.

The overlapping colors of the “facsimile” soap pads also seem to have foreshadowed a future product change.

…in the late fifties we went to work for S.O.S Soap Pads. The product was made of steel wool and soap)—that’s all. So was the competition, Brillo. Both products were colored pink, and there was no great difference in their sales volume. We went out and asked women which of the two ingredients was more important to them, and they told us it was soap. So we persuaded the client to change the ratio of steel wool to soap in favor of the latter and to make the pads blue instead of pink to call attention to the change. We launched a campaign telling women, “New, blue S.O.S. It’s loaded with soap,” and took seven points away from the competitor’s share of the market.

John O’Toole, The Trouble with Advertising

In 1959 John O’Toole worked at Foote, Cone & Belding—ad agency for General Foods. O’Toole is also named as the “writer” in 1959 copyright filings for S.O.S ads. It’s therefore possible that the same agency was also responsible for the “kitchen debate” package design. Although we’ve found no evidence to confirm this.

While the S.O.S box in the photos is the “giant economy package,” the box was also produced in other sizes. Higgins tipped me off to the S.O.S Clorox Facebook page. (Clorox being the current owner of the brand) And that’s how we obtained the images below of 4-pack version of the box.

From The Clorox Company

Judging by the pristine condition of this box, I would say that it must have come from the company’s own archives. I wonder if the handwritten “12/58” was a notation made for a trademark filing. At any rate, it now gives us a revised start date for this package design at the very end of 1958.

Clorox also shared another package with us which carried the same basic intersecting-soap-pads logo: “Handigrips.”

From The Clorox Company

It seems likely that the same designer (or design team) designed this box. They made the intersecting “soap pad facsimiles” less realistic, more like intersecting oval shapes and reused the same kitchen illustration with call-outs.

The S.O.S “Handigrips” brand, by the way, though trademarked and test-marketed, appears never to have made it beyond that preliminary stage.

The S.O.S. division of General Foods begins a market test for its new S.O.S. Handigrips scouring pads on October 19 in Portland, Me., and Roanoke, Va.

The “Handigrips” product was never fully launched or advertised. The S.O.S “kitchen debate” package, on the other hand, was widely promoted. It’s striking, in fact, how much of the advertising was all about the new packaging. 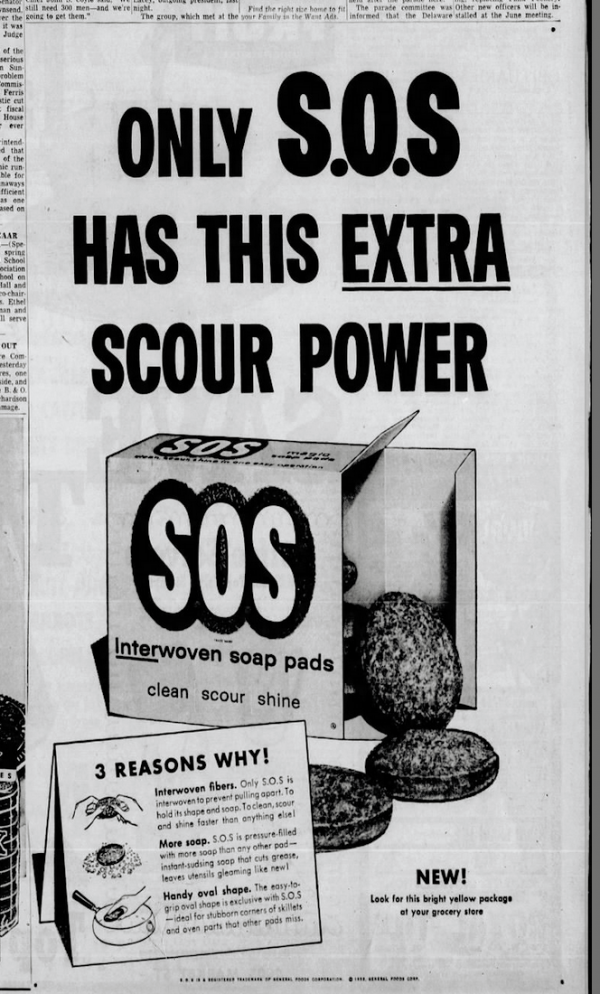 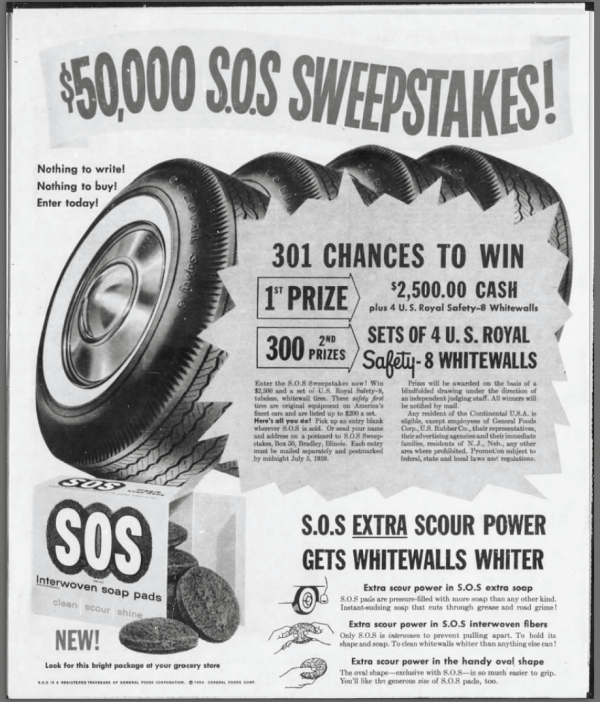 (Reynolds Wrap managed a similar news-worthy advertising alchemy with when it printed a series of ads on aluminum foil.)

Still, by 1960 the company had eliminated its Venn-diagram/intersecting-soap-pads logo and replaced the “new package” that they had been promoting for an entire year with a (newer) pack shown below.

This, then, is the “new blue” version of the product that John O’Toole was talking about. Blue to differentiate S.O.S from Brillo pads’s pink color. (Blue was also a color deemed less likely to be associated with rust — a negative for consumers of steel wool pads.)

Even though they jettisoned the logo, they kept the yellow background, and its designers retained the same kitchen illustration on the back of the box. (As with the “kitchen debate” box, there was also an alternate version with an illustration showing outdoor rather than kitchen use.) 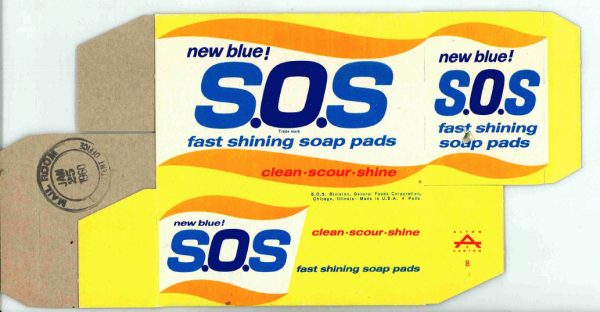 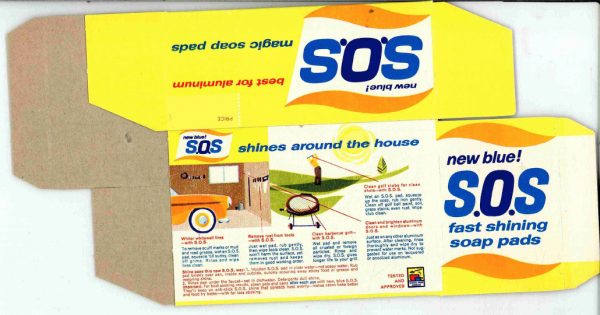 They framed the italicized 1960 logo with wave-like orange banners that are similar to nurdles. As with the previous logo, the designers apparently felt free to extend or condense the typography of the brand name.

Writers and historians will often mentioned the S.O.S box in their accounts of the “kitchen debate.”

On the gleaming Formica work surface sits a box emblazoned ‘SOS’ (full of ‘interwoven soap pads’) but neither man, each belligerent but good-humoured, gives signals of distress. ‘In America’, Nixon claims before Khrushchev interrupts him once again, we like to make life easier for women . . .’ (Nixon 1959: n.p.).

Boxes of S.O.S souring pads and Dash laundry detergent are visible in the corner, sitting atop a washing machine. It was in this pseudo-domestic setting that the two men debated the quality of American and Soviet rockets and appliances, treating each with equal gravitas. As Khrushchev pressed his country’s military superiority, Nixon countered that freedom of choice reigned supreme in America. Americans could choose which washing machine they wanted and what kind of house they should own.

In addition to S.O.S interwoven soap pads and Dash laundry detergent, American manufacturers had also strategically placed several other packaged products into the “debate” kitchen exhibit. (It’s funny how S.O.S evokes Morse code with its name and the periods-as-dots. And then, right next to it, was a “dash” in the detergent’s brand name.)

That means: Next week we look at the other “kitchen debate” products.