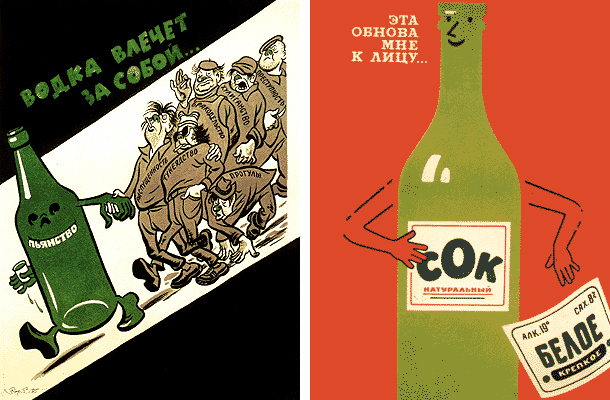 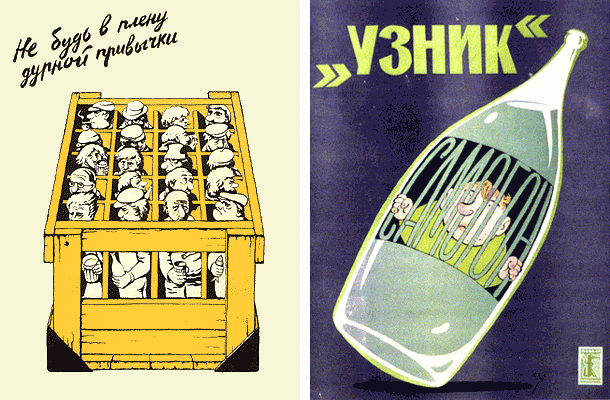 Left: Don't be in the captivity of a nasty habit
Right: Prisoner 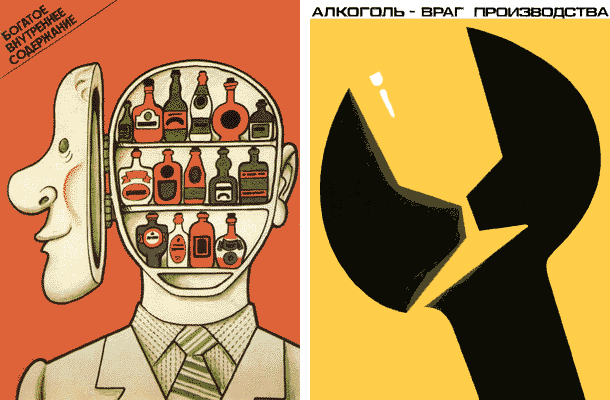 I just happened to lay a hand on a small propaganda pack of anti-alcohol society. We had one in the Perestroika era. Here’s the badge of this society. Later I started to collect anti-alcohol posters and as soon as I started developing websites I decided to put my small collection online….

I think every third poster in my collection is a treasure (also some of posters unfortunately is slapdash).

from an interview with Yuri Matrosovich

(More about the Soviet anti-alcohol campaign, after the fold…)

Below, Russian animation from ЭКРАН, 1986. Direction
and art direction by A. Fedulov. Александр Федулов.

From the Stanford University Center for Health Policy / Center for Primary Care and Outcomes Research (CHP/PCOR):

…researchers at the Center for Health Policy/Center for Primary Care and Outcomes Research (CHP/PCOR) are studying a little-examined phenomenon in that decade when Mikhail Gorbachev — then the general secretary of the Communist Party in Russia — launched a large public health campaign against alcohol abuse, which reduced alcohol production and imposed strict measures to limit its distribution…

“There was an increase in life expectancy between 1986 and 1988, especially among males, so we wanted to see if the drop in life expectancy in the early 1990s was actually related to rising alcohol consumption after the anti-alcohol campaign was renounced and not just economic transition,” explained Christina Gathmann, a postdoctoral fellow with the Stanford Center for Longevity, who is working with CHP/PCOR core faculty members Jay Bhattacharya and Grant Miller on the project. “The idea is to look at the antialcohol campaign and establish what the effect on life expectancy really is.”

… Gathmann said. “A lot of the drinking in Russia and other countries of the former Soviet Union is heavy binge drinking — literally drink until you drop. From talking to Russians, they basically say that it’s such a common phenomenon that on weekends, many will go out and drink vodka until they faint, and if you do that enough, there is a good chance that you’ll drown or cause a deadly car accident. There are a lot of deaths related to binge drinking.”

…The anti-alcohol campaign essentially started as a top-down decision from Gorbachev, made famous when he started as the president, since he was always drinking water while his other government officials had a preference for other beverages, according to Gathmann.

Gorbachev felt the need to do something about the drinking culture, especially due to the high mortality rates in Russia.

… However, the main problem facing Gorbachev’s anti-alcohol campaign was financial. The government received more than 10 percent of its revenues from taxes on alcohol sales. Not only was the campaign extremely unpopular but the government also suffered from the sharp decline in revenues during the campaign.

Even though the anti-alcohol policy might have well been effective in increasing life expectancy, it was not itself sustainable.

The Russian mortality crisis:
A case of economic transition or an anti-alcohol campaign gone wrong?