Both artists began with an existing package — or a facsimile of its package design — and then cut out, moved or removed sections.

Looking at them together gives me vertigo. Which is a good thing, in this case.

More about each of the artworks and the artists who made them, after the fold.

Marco Maggi was born in Montevideo, Uruguay in 1957. The same year that General Mills acquired the S.O.S soap pad brand. In the Brillo vs S.O.S rivalry, however, Maggi appears to be a Brillo pad man. (See also: Maggi’s works on Reynolds Wrap aluminum foil.)

What are we to make of his Brillo sculpture? Based on the perspective of the fragmented Brillo box, we know that he used a photograph of a box rather than a three dimensional package. Looking at the piece, we suspect that it’s based on the famous Warhol sculpture, rather than on an actual Brillo box. He confirms this for us, by giving it the lengthy title: Turner Box: Complete Coverage on Warhol (White, Red, Blue Brillo Box).  And indeed, the other sculptures in his “Turner Box” series are also based on artworks.

What’s less obvious to us in looking only at the picture above, is that Maggi made this sculpture from a stack of 500 copies of the Warhol box photo. He carefully cut away 16 rectangular portions from some (most?) of the pages, leaving a Brillo box grid at the front with the removed portions confined to a background level.

The Ted Turner Collection refers to the way information is framed and packaged.

from a press release by Josée Bienvenu Gallery about Maggi’s 2005 show entitled,
The Ted Turner Collection, Complete Coverage (exclusive report from the battlefield)

In recent years I have been working on a series titled The Ted Turner Collection from CNN to DNA. The project started by thinking about the word “cover”. It’s interesting to me that the mass media use the word “cover” to mean the opposite: to show something. They promise “complete coverage”.

Marco Maggi in an interview from Roll Magazine, 2012

Maggi’ also has made some of his “Turner Boxes” with “incomplete coverage.” What does he mean by that? I’m not certain, but looking at examples of both, I notice that the “incomplete” versions are more abstract.

Here, the original image is so incomplete that, without its title, I doubt I would ever have recognized it as a different Warhol Brillo sculpture from 1963 or 64 (on right).

And Maggi has also made other works in which you would be hard-pressed to identify the Brillo box element if you didn’t know to look for it.

His “Stacking Quotes,” for example, seems almost like a companion piece to one of the Brillo “Turner Boxes.” As if he were using up some of the left-over bits.

According to Australia-based Interlude Gallery, the artist known as Mevna lives and works in Guadalajara, Mexico. Although he uses the single name of “Mevna,” there is evidence that his full name might be Mevna Isosmoos. (See also: Instagram) On the other hand, there is that inexplicable reference to “the artist formerly known as Mevna” on the Wikipedia page for Guadaljara. So I just don’t know.

What are we to make of his S.O.S sculpture? Like, Maggi, he has cut away portions of a package (or facsimile) and re-positioned them on a different plane.

In this case, however, he’s introduced a geometric Droste effect. Putting replicas of diminishing size in front of each S.O.S brand logo. Up to a point, since this cannot go on until infinity. We like this, of course.

At first glance, Mevna seems to working with an actual package design, rather than starting with an art-historical reference. He contradicts this for us, by giving it the lengthy title: S.O.S (Ode to Davis Birks after Tom Friedman).

Davis Birks is an artist and teacher. Tom Friedman is another artist who has also made sculptures from cut-up and reconfigured packages. And facsimiles of packages. (See also: 13 Quaker Oats Boxes) So Mevna’s “S.O.S” is art about art after all.

In the Brillo vs S.O.S rivalry, Mevna appears to playing both sides against the middle. In addition to his recombinant retail pack for S.O.S, he has also made some Brillo-based artworks. 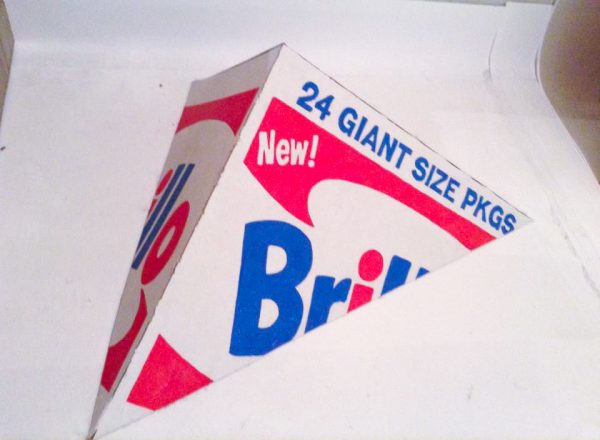 With his 2012 “Pedestal Sinking,” for example, Mevna used a truncated corner to create the illusion of a Brillo box sinking into the floor. He seems to be commenting on Warhol’s art-historical importance, but is he also saying something about pedestal sinks?

We do like the polyhedral “corner” thing. It also reminds us a little bit of Tom Friedman’s “box corners” sculpture.