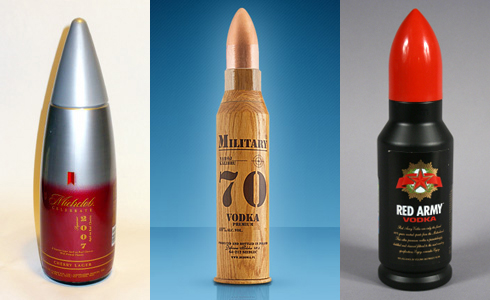 Last Friday, it was rocket-shaped bottles with fins. Without fins, a bottle with a nosecone begins to look more like a missile or a bullet…

1. Michelobe Celebrate 2007 cherry lager (also came in Chocolate): winner of a Glass Packaging Institute 2007 “Clear Choice Award” for its “elegant, 24 oz. custom glass bottles featuring refined pressure sensitive labeling” but reviewers never fail to mention the bottle’s shape. An Epinion: “ Some say bullet-shaped. I say Alberto VO5, or those food-coloring containers. Either way, it’s a shape unique to these holiday beers. Certainly it catches the eye, but beware fancy packaging; it often leads to disappointment with the contents therein.”

2. Debowa Military Vodka (because bullets are beautiful): “Consumers of liquors associate Oak Vodka of Poland with the vodka of the highest quality, refined taste, consistent with traditional recipe, and served in a beautiful packaging.”

3. Red Army Vodka, captitalizes on the Bolshevik Revolution: “In 1917, a small band of exiled Russian citizens changed the face of their nation and the course of world history. These were the young, proud men of the famous Red Army. They were workers, students, soldiers, bonded with a common goal. Led by only a few, they rose up against the oppression of a Czarist Russian government, fighting in horrific conditions. They were countrymen armed with only two weapons. The first was their undying commitment. The second was vodka.”