In 2010 we devoted an entire week to animal-shaped bottles. We found bottles in the shape of fish, squirrels, pigs and even rats.

I wouldn’t call it an “inspiration.” (Since that word now seems to belong more to terrorists and copycats.) But I got the idea to research cat-shaped bottles from the Women’s March on Washington and the Pussyhat Project.

“Pussycat” (or “pussy cat”) use to be a perfectly innocuous pet-name for cats. But, over the years, a certain “locker room talk” slang-term has gradually made it much less popular. It became a difficult-to-avoid double entendre. (See also: Johnny Carson and “Instant P.“)

I like the way the Pussyhat project slyly reclaims the vulgar part of this double entendre to its own advantage.

But I digress. The topic today is Pussycat-shaped perfume bottles and we have 3 of them to discuss.

photo via: Into The Gloss

I brought Fabien Baron to design the bottle with me. I thought we could do something that hints at a cat. … But I wanted minimalist, not cutesy. It’s not got eyes and a nose and whiskers. I didn’t want sharp corners. I wanted the feel of a beautiful round pebble you pick up on the beach that has been washed a million times by the waves. The cap grew out of a sketch I drew.

-Grace Coddington as quoted by the LA Times, 2016

It is not, it turns out, the first cat bottle anywhere: Some of Katy Perry’s fragrances come in a feline bottle.

“That really upset me,” Ms. Coddington said, though the two bottles strike different tones. Ms. Perry’s is “a sexy cat and very glitzy. I think this is … I hope it’s kind of refined.”

Grace—The bottom is a stock bottle because if you make it custom it is incredibly expensive. … I put all the money we didn’t have into the cap.

Grace—Due to the fact that I’m rather partial to cats, when I was doodling it became a cat, of course. The drawing just got simpler and simpler until it’s basically just a round ball with two little spiky ears.

Grace—This sounds pretentious: But it’s like if Jeff Koons would do it, like his Balloon Dog, but not. It’s that kind of simplicity. I didn’t want it to be cute. … I wanted it to have a clean modern feeling about it, but still be a cat because I’m so obsessed with them. It was cute but not so cute that a grownup couldn’t have it on her table. I got carried away and thought it was so clever and gave it a tail. Fabien actually went white when he saw the tail! … We all looked at each other and thought, OK let’s keep it simple. So we did.

Like Coddington, Perry began her bottle design with a sketch.

Katy Perry designed the bottle for her first fragrance herself giving the designers a detailed hand drawn sketch. This drawing was then crafted into the signature scent bottle complete with jewelled eyes, metallic accents and lavender colouring.

(I found this photo of the “Purr” bottle on Happy Lamp.)

Perry, who had campaigned on behalf of Hillary Clinton in the recent presidential election, attended last week’s Women’s March in Los Angeles. 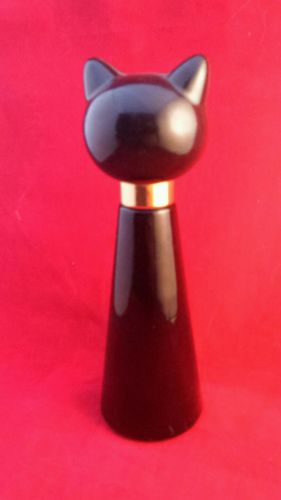 Usually I don’t much like Avon bottles. They’ve made a few other pussycat perfume bottles that I wouldn’t want to feature here.

This one, however, has a nice, minimal aspect that I think even Grace Coddington might approve of.

The Avon Bottle Encyclopedia tells us that the “Tabatha” black cat was a 3 oz. perfume bottle made of black glass and plastic.

I wish I could tell you who designed it, but, since most package designers toil in anonymity, I couldn’t say. Sad.

Avon Products and Donald J. Trump announced yesterday that the beauty products company would open its first retail outlet in the United States at Trump Tower.

Avon will no longer be calling at Trump Tower.

The cosmetics company is closing all its stores and spas, and now we hear it’s just paid Donald J. Trump $10 million for the pleasure of terminating the remaining years on their flagship lease. …

“I have the best block and am being besieged by offers,” Trump said of the retail space, declining to discuss the Avon lease.

Last year Avon did what candidate, now President Trump has been urging companies not to do. They moved their operations (and jobs) from the US to the UK.

Ironically, this moved was said to have lent support to Brexit—something that Trump has enthusiastically supported.

Brexit campaigners have hailed the decision by cosmetic firm Avon to move its headquarters to the UK, claiming it is proof that Britain can thrive outside the European Union.

No evidence that Avon, the brand took part in any of the recent Women’s Marches, although the company’s tagline is: “the company for women.”

Steven Colbert made a joke about Donald Trump being superstitious and therefore avoiding them.

There was also a recent skit on Saturday Night Live making a similar joke.

When children are small we elders in charge are apt to suppose them altogether plastic. There are resistances, it is true, but these express themselves at first only in tantrums, in apparently quite meaningless outbreaks; we impose our phrases and values so completely, that such spasmodic opposition seems to signify nothing. We impose our names for things, our classifications with their thousand implications, our interpretations. … That is “hand,” we dictate, that is “hat,” that is “pussy cat,” that is “pretty, pretty,” that is “good,” that is “nasty,” that is “ugly — Ugh!”  That again is “fearsome ; run away!” There is no discussion.

H.G. Wells, The New Machiavelli, Chapter the Forth: Adolescence

And, apropos of nothing, see also: H.G. Wells, The Last Trump.