For day 3 of “Diabetic Branding” week, we delve a little deeper into the Loeb Dietetic Food Co.—the company founded by Eugene Loeb in 1908.

Now largely forgotten, the brand once dominated the market for diabetic/dietetic foods.

Some facts about this now-defunct company:

1. Loeb Dietetic Food was once “the largest manufacturer of dietetic foods in America”

Loeb was a big diabetic food company whose main line was sugarfree products.

The Loeb Dietetic Food Company, New York, which has confined distribution of its line of fifty-six items to the diatetic [sic] market, is planning a campaign to open up new outlets. Newspapers will be used for  preliminary testing. The account has been placed with Ralph Rossiter, Inc., New York.

The emphasis shifted from diabetic to dietetic — and the two-letter change ushered in another new era.

Twenty years ago, the Loeb Dietetic Food Company, the oldest manufacturer of dietetic foods in America, offered the consumer some 24 items; customers could find them … in pharmacies and at a few fancy foodshops. Today the total product count is closer to a hundred and distribution includes independent grocery stores and large chain supermarkets.


Phillis I. Rosentuer, Revolution on the Range… Our Food Habits Have changed The Face of America, from a series of articles published in the The Advocate Messenger, 1957 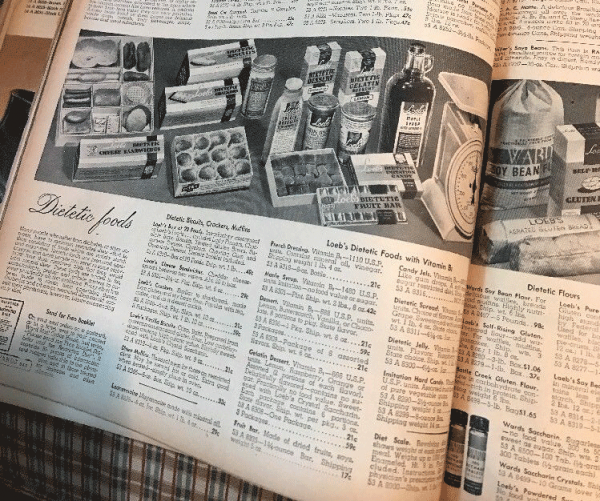 5 more facts, including a 1908 paternity scandal, just as the company, itself, was being born.

2. In 1945 they designed a “faux frame” motif for their packaging 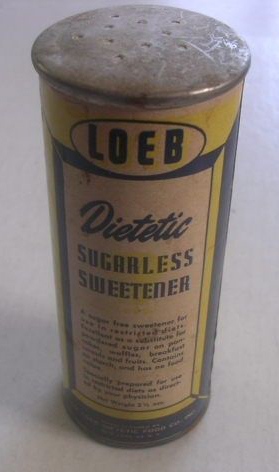 For such a big company, in business for so many years, you’d think you could find some examples of its packaging for sale on eBay. Believe me, I looked, but I could only ever find one.

I guess a company needs to have been very big indeed, for much of their packaging to survive. (Since most people do not collect packaging.)

The Dietetic Sugarless Sweetener (for sale on eBay for $29.99 + $2.75 shipping) is a pretty inauspicious example of one of their early packaging motifs.

This was a departure from their previous 1930s packaging style (with the perpendicular wrap-around red & blue bands).

Let’s call it their “faux frame” packaging. You can see better examples in their “product line” photo at the top of this post. (Wrapping a rectangular frame around such a narrow cylinder, however, is just too much of a stretch.)

The company registered the new motif in various trademarks for their packaging in 1950 and 1951. (below) Although they stipulate that their earliest use of the framing device was in 1945-47. 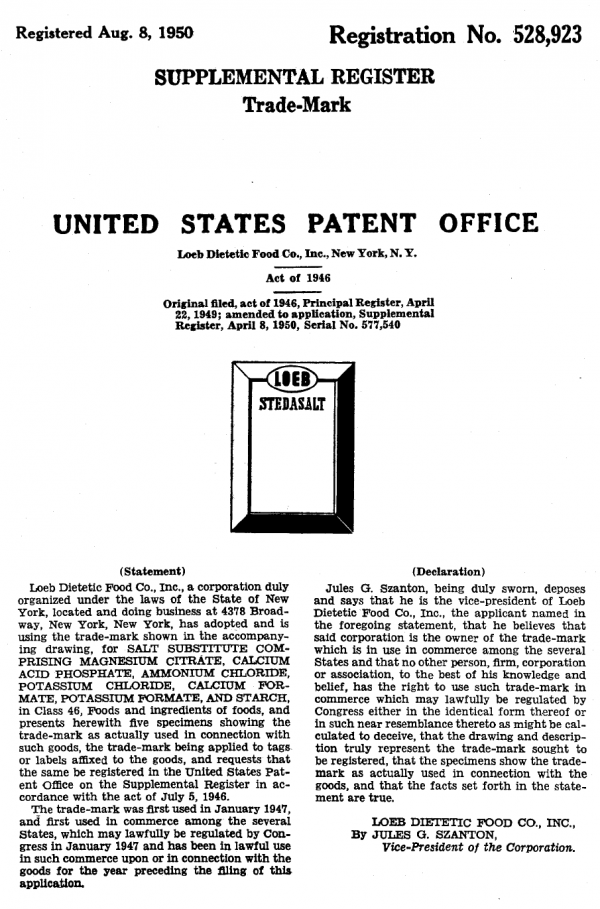 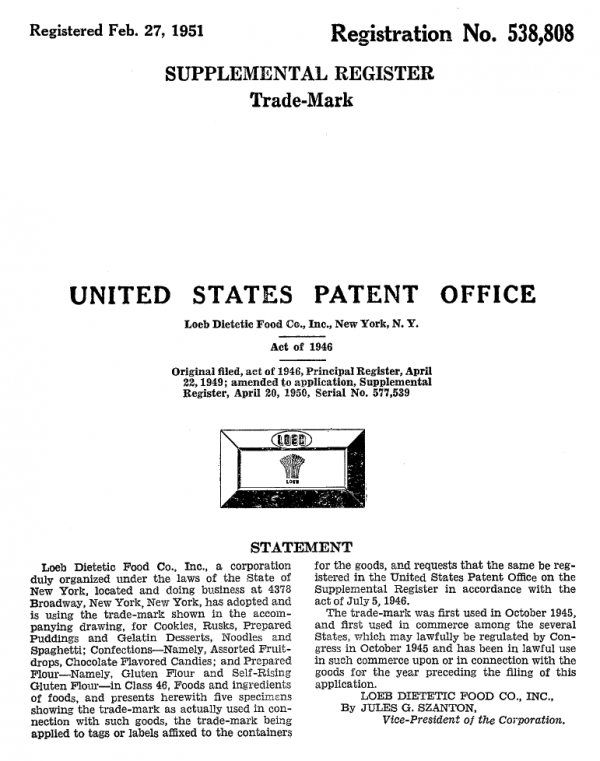 We find Eugene Loeb’s name on the 1929 trademark registration shown below. 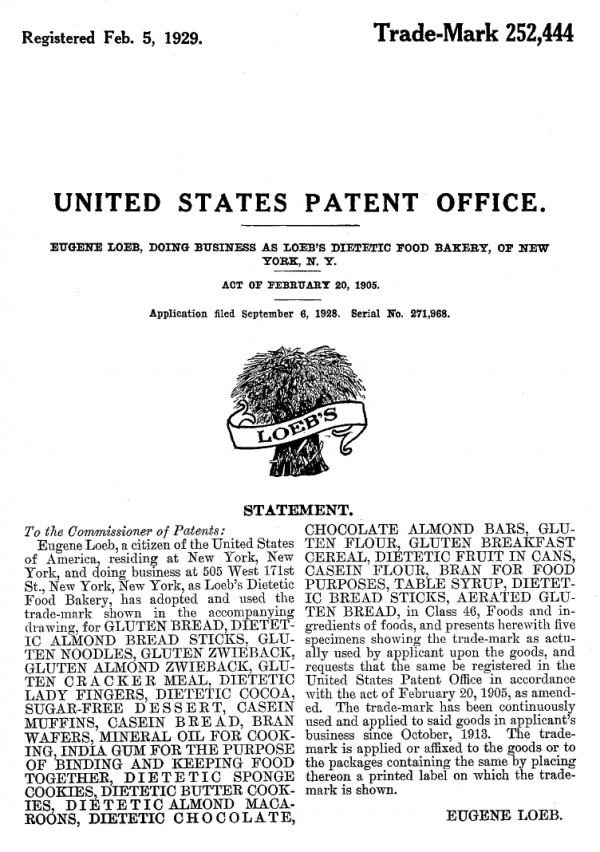 This earlier trademark depicts a bundle of wheat wrapped in a scrolling “Loeb’s” banner. This logo harks back to Eugene’s original occupation as a baker.

A 1915 R.L. Polk directory tells us that the officers of the company (Loeb’s Diabetic Food Bakery, Inc.) included Eugene as President, his wife Lena as Treasurer and Eugene’s brother Jacob as Secretary.

Eugene and Jacob also had another brother (named Alfred) who worked as a baker, but died in 1912. 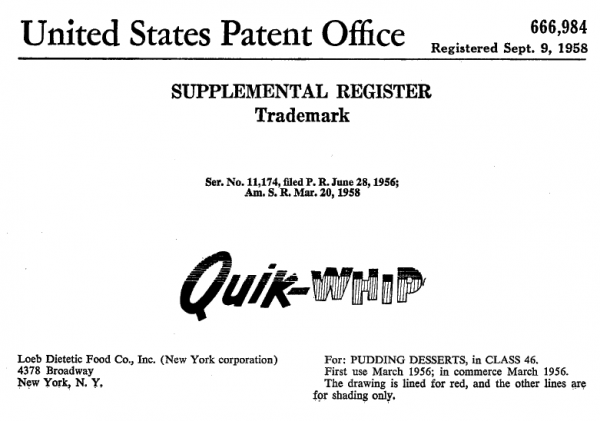 Quik-Whip was a dietetic dessert mix. Departing from their staid “faux frame” format, the company seemed to be aiming for a more playful 50s–60s style typography. They launched a number of new products during this period. 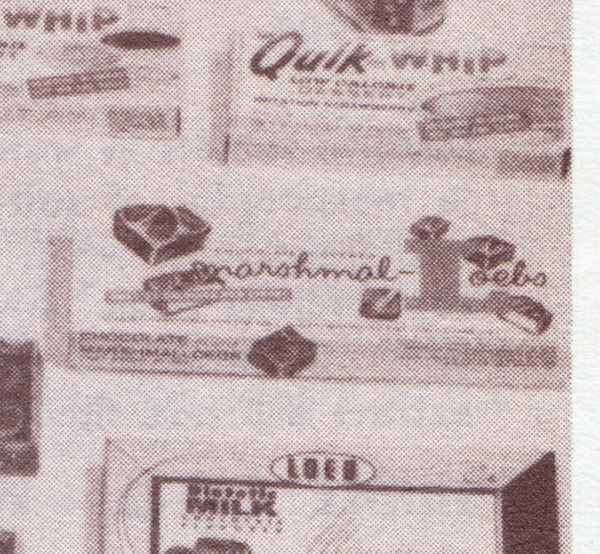 MARSHMAL-LOEBS, in particular, strike me as an attempt to channel Paul Rand’s casual cursive style. (Not suggesting that Paul Rand actually designed this, however.) 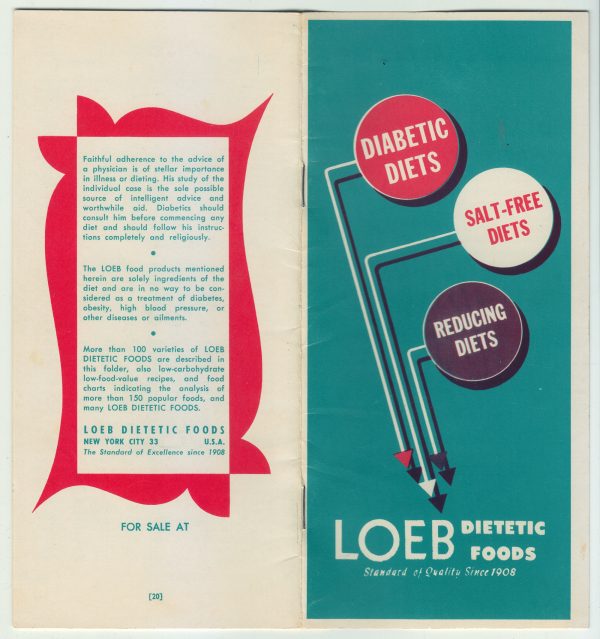 5. By 1965 the family apparently sold the company and the brand disappeared

The new owners placed this ad in Food Business in 1965 and it’s the last we hear of the company. Despite their claim of a redesigned line of “new hot items,” it looks as if this was the last ad they ever placed.

Unless they merged Loeb Dietetic with some other brand. I have seen newspaper ads for a Monarch brand Quik Whip dessert, although not with any pictures of the packaging.

When I found Eugene Loeb’s name in some turn-of-the-century court documents, I was hesitant to conclude that this was the same Eugene Loeb who founded Loeb’s Diabetic Food Bakery. After doing further research, however, I was able to corroborate the address of the bakery with descriptions of both, er…  crime scenes. 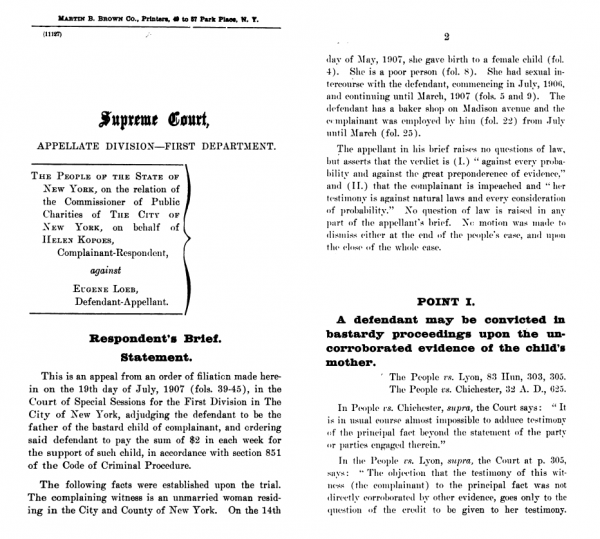 Such a funny archaic legal term. (Sometimes they spell it “Bastardly” Proceedings.)

I was so charmed by this legalese, that I searched for it in conjunction with the name “Eugene Loeb.”

Imagine my surprise when I turned up second paternity case in which he was also named. Should I assume that this was the same man? And that this was his M.O.?

Once I was able to match up the description of Loeb’s family members, with the family members described in both court documents, I knew that this was indeed the founder of Loeb Diabetic Food Bakery. In both cases. 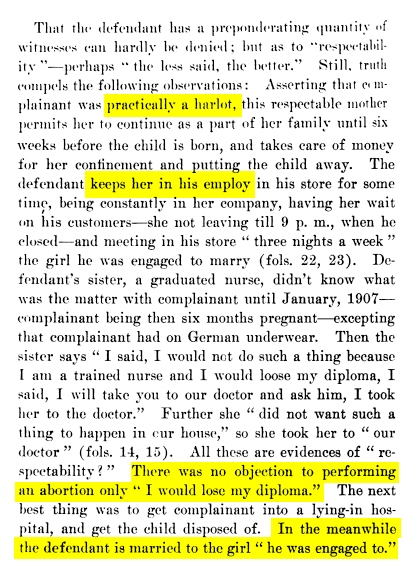 In the first case, the Commissioner of Public Charities sued Loeb in 1907 on behalf of Helen Kopoes (also spelled “Kopas”).

These are interesting to read. The court ordered Loeb to pay $2 a week as child support. The document above says it was a female “bastard child” that Loeb had sired. In the appeal, however, the court papers refer to a “male bastard child,” and we have reason to believe that’s correct. (More about that later…)

We know that, at this time, the founder of Loeb Dietetic Food Bakery lived above the bakery on Madison Ave. with his mother, Clara and his sister Adele. And we know that Adele Loeb was a registered nurse.

And, as we mentioned earlier we know that Eugene Loeb married Lena Friedman in 1907.

Loeb Dietetic Food Bakery was officially established in 1908. Two years later, Eugene is at it again.

In 1910, Anna Bilkovie, another young woman employed by Loeb, accuses him of rape and assault and is awarded damages. In this case, the lawsuit was filed on behalf of “Mary Bilkovie” — her infant daughter. 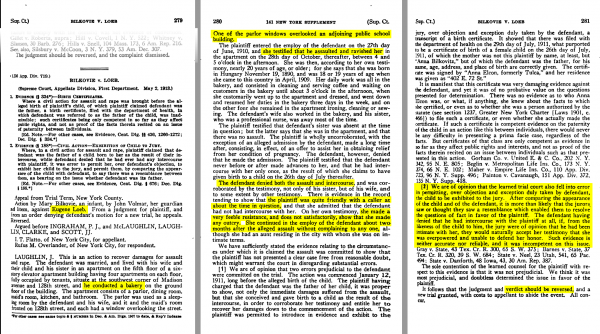 Now married with one child, Loeb still lived above his bakery.

The defendant was married and lived with his wife and their child and his sister in an apartment on the fifth floor of a six-story elevator apartment building having four apartments on each floor, fully occupied by tenants, situate at the southwest corner of Madison avenue and One Hundred and Twenty-eighth street, and he conducted a bakery on the ground floor of the building. The apartment consists of a parlor, dining-room, maid’s room, kitchen and bathroom.

Loeb hired Anna Bilkovie (sometimes spelled “Bilkovic”) to work in the bakery. She also appears to have done housework for the family and occupied the “maid’s room” of the family’s apartment.

This time Loeb’s employee accused him of having raped her. As with the earlier case, his family closed ranks. His wife [Lena Loeb] and his sister [Adele Loeb, the nurse] both testified that there was no assault.

On the job at Loeb’s Diabetic Food Bakery

This is an action to recover damages for assault and rape. …

The plaintiff entered the employ of the defendant on the 27th day of June, 1910, and she testified that he assaulted and ravished her in the apartment on the twenty-eighth day of October thereafter, between four and five o’clock in the afternoon. … Her daily work was all in the bakery, and consisted in cleaning, and serving coffee, and waiting on customers in the bakery until about three o’clock in the afternoon, when she customarily went up to the apartment and dressed and went down and resumed her duties in the bakery three days in the week, and on the other four she remained in the apartment ironing, cleaning or sewing. The defendant’s wife also worked in the bakery, and his sister, who was a professional nurse, was away most of the time. …

The [plaintiff’s allegations] are …. uncorroborated with the exception of an alleged admission by the defendant … of an offer to assist her in obtaining relief from her condition of pregnancy. The defendant, however, denied that he made the admission. The plaintiff testified that the defendant never before or after made advances to her, and that he had intercourse with her only once, as the result of which she claims to have given birth to a child…

As in the Helen Kopas trial, the court heard testimony about a proposed abortion. (as highlighted above)

The initial trial court jury found in favor of Mary Bilkovie and awarded her damages.

The “Bilkovie v. Loeb” document, however, is actually from the appellate court’s decision, reversing that verdict.

The appellate court judge’s criticisms of Mary Bilkovie’s allegations, sound a lot like what we hear all too often on the news today.

The defendant denied both the assault and intercourse …

On her own testimony she [the plaintiff] made a very feeble resistance and does not satisfactorily show that she made any outcry. She continued in the employ of the defendant about two months after the alleged assault without complaining to any one …

Loeb denied that any of it ever happened. But even if it did happen (the court seemed to imply) it was consensual—because she didn’t resist her employer fiercely enough.

But even if Flatto had never litigated a paternity case, he did persuade the court to overturn the earlier verdict. This was mostly because the baby had been presented to the jury as evidence of Loeb’s paternity—something that was not permitted in New York courts.

We are of opinion that the learned trial court … fell into error in permitting … the child to be exhibited to the jury. After comparing the appearance of the child and of the defendant, it is more than likely that the jurors saw, or thought they saw, a resemblance which enabled them to resolve the questions of fact in favor of the plaintiff. The defendant having denied that he had intercourse with the plaintiff at all, if, from the likeness of the child to him, the jury were of opinion that he had been intimate with her, — they would naturally accept her testimony that she was overpowered and unable to defend her honor.

In doing so, Flatto successfully recouped the “damages for assault and rape” that the jury had previously awarded to Mary Bilkovie. Surprisingly, this only ever amounted to $1,250! (Or was it, $1410.02?)

Thereafter, paternity trial attorneys would often cite “Bilkovie v. Loeb” as legal precedent. At least in New York. (And only up until the advent of genetic testing.)

The lack of tangible physical evidence in the traditional paternity suit perhaps is the reason why English and [some] American courts allowed the admission of what is now called “bald eagle”85 evidence. Simply put, bald eagle evidence is when the like or unlike resemblance between the child and the putative father is proffered as testimony or demonstrated to the jury.

85This evidentiary method or trial technique is called “bald eagle” because it is based on the notion that if it looks like a bald eagle, then it probably is. This, of course, is a variation of the venerable “duck test.”

I never expected to be getting into the subject of “paternity suits” when I began looking into the company behind the “diabetic Dave” ads. But we must follow where the facts lead us, I think. 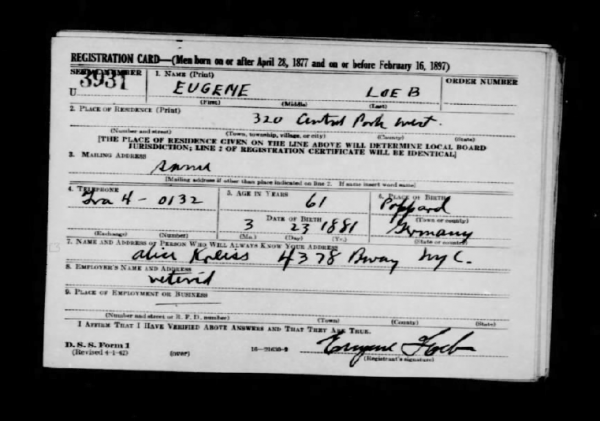 We know this because his “old man” draft card says he is retired. Now residing at a Central Park West address, he lists his daughter, Alice Loeb Kreiss as next of kin. (The address given for her, however, was actually the address for Loeb Dietetic Food Co.)

As for Loeb’s two employee/complainants:

I wasn’t able to figure out what became of “the infant” Mary Bilkovie/Bilkovic and her mother, Anna.