Looking at bottles like these, I’m wondering if part of their appeal is that we feel akin to this sort of divided, bilateral symmetry. We, too, are compartmentalized, our dual halves sometimes at cross-purposes.

The brain is not only symmetrical; it is also double.

(Details about each one of the 7 bottles above, after the fold…) 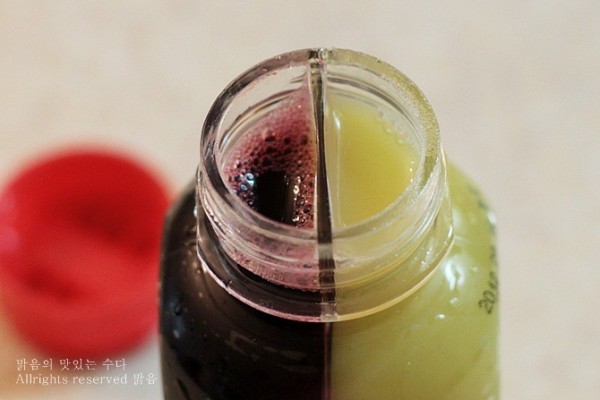 1. Seoul Milk’s “Duet” juice, launched in 2012, used a dual chambered bottle to package two flavors of juice in a single bottle. Touted, at the time as “the world’s first dual-package” (for juice)

While the advantage of a bifurcated bottle over a twin pack of separate bottles is debatable, the duality of “Duet” created significant buzz for this product in Korea.

Not sure whether Seoul Milk patented Duet’s bottle. I looked, but in this case, did not find one. It should be noted, however, that it’s not just the bottle itself that’s note-worthy.

As with many dual-cambered bottles, there is also a dual-dispensing cap. In this case, the cap allows for the two juices to be poured either separately or all in one go.

Chesebrough-Ponds saw an opportunity to extend the dual-chambered dentifrice concept into the mouthwash category.

Kornick Lindsay responded with a package that leverages the uniqueness of the two-part system while adding convenient features for the end user. Our patented package incorporates two PET chambers that rest on a molded PP base, and a flow controlled dispensing system to accurately meter the components into the system’s cap.

(Other patented Kornick Lindsay package designs include: the Coca-Cola “Contour” can and the “Sucrets Showcase” pack with a porthole) 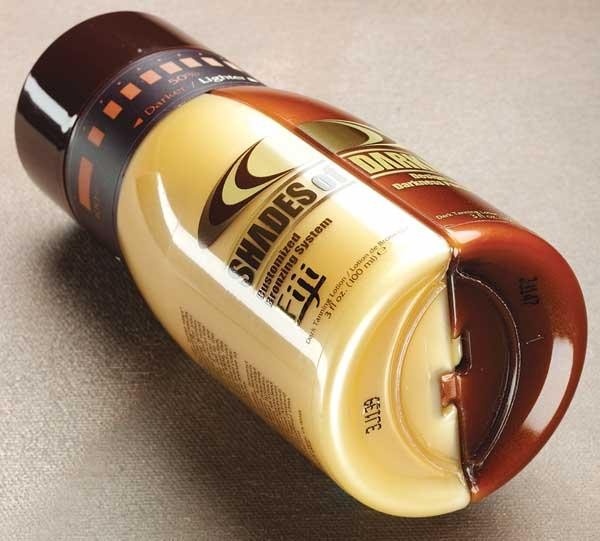 3. Shades of Darkness appears to be a discontinued product once manufactured by Supre Tan.

Packaged in a Versadial/VeriBlend dual-dispensing bottle, the product’s brand promise was a numerically precise degree of tanning.

… the U. S. debut of the Versadial variable dispensing technology. Appearing at first glance as a single bottle the package is actually two 3-oz half-bottles that lock together tongue-in-groove style. One side holds the “light” formula lotion the other the “dark” bronzer that contains a higher percentage of the active ingredients including self-tanners and bronzers.

Rotating the cap regulates the ratio of product dispensed from the bottles. As the Versadial dispensing head rotates it simultaneously positions an interior disk at a premeasured angle and setting to the pump pistons. These angles determine the extent to which each pump will be engaged when the actuator is pressed precisely affecting the amount of product that is dispensed from each bottle. Mixing ratios from 0 to 100% in as little as 5% increments can be preset.

(Another VeriBlend bottle shows up further on.) 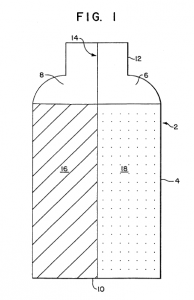 4. Clorox’s dual-chambered bottle for Liquid Plumr “foaming pipe snake” is another another product with reactive chemical that need to be kept separate until use. (Like Mentadent.)

Referring now to Figure 1 of the Drawing, a bottle or container 2 is depicted, said bottle having a body 4 comprising two chambers 6 and 8, an end wall or panel 10, and a depending finish or neck 12. A closure (not shown) could, of course, be combined with the finish, to seal the bottle contents from the environment (typically, the closure and finish are provided with mating threads, although bead and tab and other sealing means are possible). The chambers 6 and 8 can be formed by partitioning bottle 2 with a median wall 14. One chamber holds first portion 16, the inventive peracid precursor-contained colloidal dispersion, of a delivery execution according to the invention, the other chamber holds second portion 18 of the delivery execution. Together, first portion 16 and second portion 18 comprise one product formulation according to the invention. Rather than partitioning the bottle into chambers, one could also injection mold two separate chamber halves and attach the halves by adhering them. Alternately, the chamber halves could be co-blowmolded by having a diehead capable of blowing dual partitions into a mold, with that portion of the one partition wall coming in contact with the other forming the partition. An equivalent of the dual chambered container would be to provide two separate containers containing, respectively, a first portion containing the peracid precursor composition and a second portion containing the remainder of the dual delivery formulation.

5. Redkin’s “Blond Idol” comes packaged in another of VeriBlend’s dual-dispensing bottles. In this time the product’s adjustability is a matter of controlling hair color, rather than skin color. 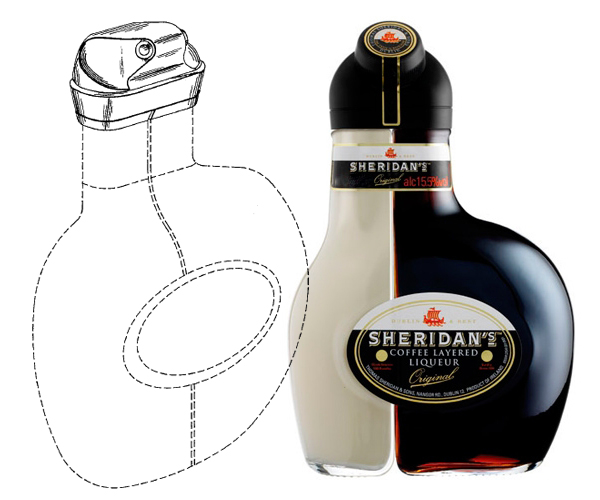 6. Sheridan’s dual chambered bottle from 1994 had a patented pourer…

IDV (now UDV Diageo) had conceived and tested a radically new two-part product in the international drinks market – Sheridan’s Perfect Pour. While the brand had stimulated market interest worldwide, customer feedback on pouring the drink from two separate but joined bottles was not good. PA Consulting Group was given the task of designing and developing a new ‘fool-proof’ one-step pouring system within a twelve month timescale to meet a launch date. The Sheridan’s Perfect Pour was introduced on time to a worldwide market, enabling IDV to build a substantial new drinks market and brand around the novel concept. 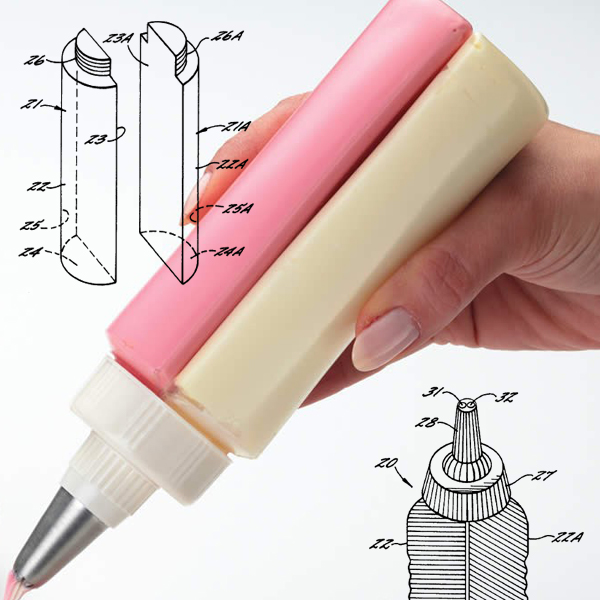 7. The Sweetly Does It “Duel Icing Bottle” above is one of several versions of dual chamber squeeze bottles for applying two colors of icing simultaneously. (Other brands include Tala and Kuhn Rikon’s “two chamber squirt bottle”)

Seems likely that most of these bottles are manufactured in Hong Kong. Hard to say who invented them, but they appear to have been manufactured along similar lines as the “Multi-Compartment Container” described in Morris P. Maine’s 1999 patent. Two blow-molded “half bottles” sharing the same cap…

The pliable plastic from which the multi-compartment container is formed enables a person to squeeze either of the compartments and push out one of the condiments or squeeze both compartments and squeeze out both mustard and catsup simultaneously on foods like hot dogs and sandwiches.

Using one of these bottles for mustard and catsup would actually be a cool idea, I think. (I’m envisioning parallel lines of red and yellow.)