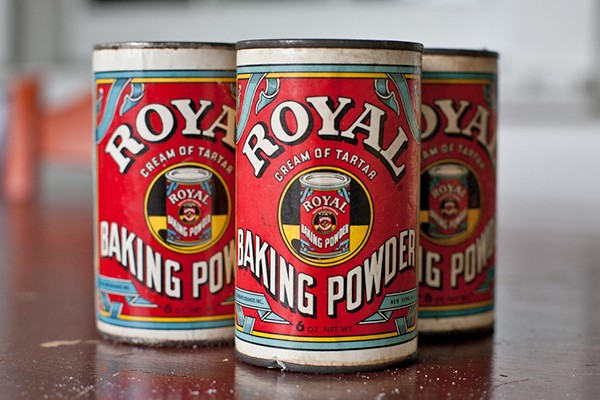 Today’s the day that we take a recursion-excursion into the Royal Baking Powder label.

First used in 1873, but who actually designed the label? 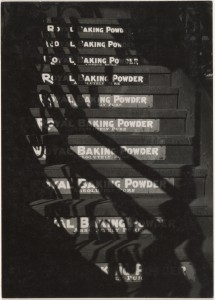 The 1929 Walker Evans photo on the right (“Royal Baking Powder” Advertisement on Steps to Elevated Train Platform, Sixth Avenue, New York City) shows that, even without an image of their trademark can, the Royal Baking Powder Company was nothing if not fully invested in a repetition of sales message.

7 quotations on the subject (and more pictures), after the fold… 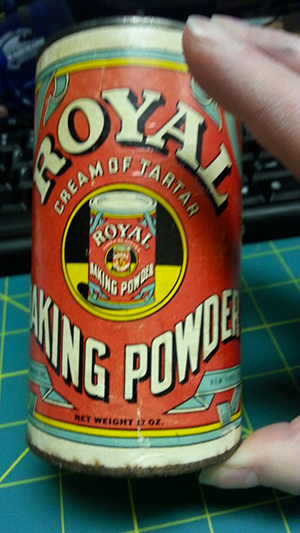 One day in 1865, a druggist in Fort Wayne, Indiana, named Joseph C. Hoagland mixed a batch of five pounds of baking powder in his drugstore. The recipe was no secret: anyone could combine sodium bicarbonate with an acid substance to produce this substitute for yeast. Yet the premixed version found a quick market in Fort Wayne. Hoagland had an entrepreneurial vision. He called it Royal Baking Powder and put ads in religious and women’s periodicals, serving as his own agent, only patronizing papers that would give him the agent’s commission. In the 1870s he was one of the first big advertisers to feature a picture of the product in his ads. When he prospered he moved the operation to New York. He commanded the upper left quarter of a magazine’s back cover, a favored position, with the inevitable picture of a can and the motto “Absolutely Pure.” By the early 1890s Royal was spending $600,000 a year on newspaper ads, the largest budget in the business.

Stephen R. Fox
The Mirror Makers: A History of American Advertising and Its Creators 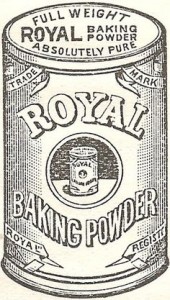 But neither the contingency of the universe nor a certain concept of original sin it implied did as much to make me whatever I am as another idea which burst upon me on the day when I first really saw a Royal Baking Powder can — or rather, to be perfectly exact, the picture of such a can which used to appear regularly in a colored advertisement on the back cover of the old Cosmopolitan. A little later I was to read Shaw’s Androcles and the Lion in Everybody’s Magazine, and that was important too. But not so important as the powder can. Perhaps I should be ashamed to mention… that the effect of that particular advertisement may have done more than McGuffey’s Readers to mold the American intellectual. Some, to be sure, missed the baking powder and were stopped in their tracks by Quaker Oats instead. But the difference is unimportant, and I have sometimes met ready comprehension when I asked without preliminaries: “Were you a Baking Powder man or a Quaker Oats man?” For the benefit of those who were blind to these advertisements, I had better explain. The can and the package were both adorned with pictures of the container itself. Therefore, the advertisements included a picture of a picture. And that picture must of necessity include a picture, of a picture, of a picture. In practice, of course, the series finally ended with a dot. But it shouldn’t have. And thus I became simultaneously aware of two stupendous facts. Infinity can be neither represented nor imagined, but logically it must exist. The brain reels, and it is a painful experience. But here at least is a trauma which must be suffered before any human being can become fully human. 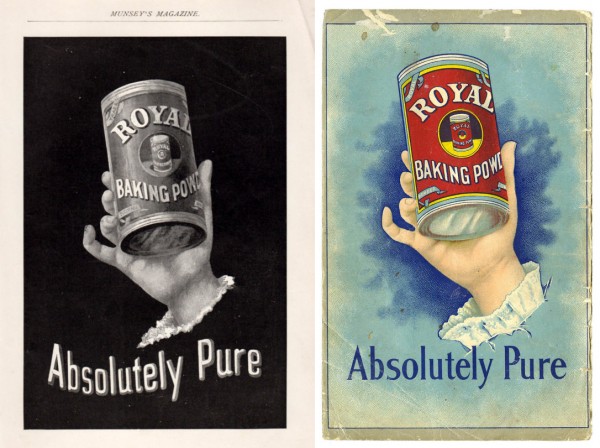 I sit with a stack of old magazines in front of me. I am in a room built around 1780…

Today, nothing in this room is not a commodity, except for the dust, the cats, and the cordwood… Among the kinds of bought thing I can see from where I sit, many came into use about the time of these magazines… Others existed long before 1895 but only became national, homogeneously made and packaged commodities about then: bar soap, tea, cereal, canned soup — even a tin of Royal Baking Powder, nearly the oldest national brand of them all. One-fourth of Munsey’s’ back cover goes to an ad for this product. A woman’s hand holds out a tin of it almost identical to the one on my shelf, with the ingenious device of a smaller can pictured in a circle on the large one, one smaller still in a circle on that, and so on to infinity. The ad makes no arguments, no offers, nor does it say how or where to buy Royal Baking Powder. In fact, only two words speak from the red field in back of the can: “Absolutely Pure.” This familiar slogan, plus the woman’s frilled cuff, plus the imaged can, plus innumerable repetitions, said a lot…

Richard Ohmann, 1996
Selling Culture: Magazines, Markets, and Class at the Turn of the Century

From: A Postscript to “Children’s Insights:” Infinity

I can’t date this memory accurately but I would guess I first puzzled over the baking powder can when I was five or six.

(Above, right: a Royal Baking Powder “dollhouse package” now for sale on Etsy for $1.95) 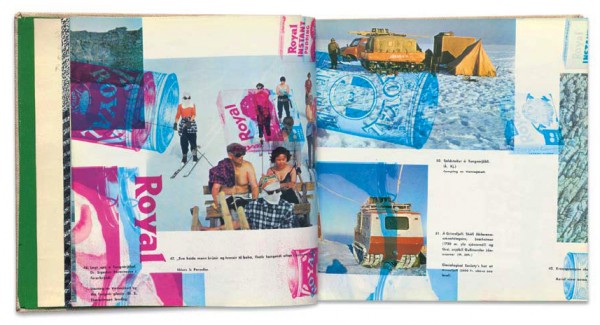 Roth’s early works, particularly Book 3c (1963), a limited edition juxtaposing in various ways Icelandic landscapes and Royal Baking Powder cans. While the latter may owe their existence to Andy Warhol’s Campbell’s Soup Cans sequences, they testify, as will become apparent, to intellectual and conceptual concerns hardly typical of pop art. Rarely seen in isolation, Roth’s cans interfere with scenes of glaciers and volcanos either by obliterating them in part or by appearing as phantom images within the landscapes. Moreover, we can hardly tell to what extent the mostly psychedelic colors arise from the baking powder container, from nature, or from trick color photography. Long before book artists could enlist the help of powerful computers, Roth produced similar effects by a skillful and time-consuming use of photomontage, color transfer, and overprinting. 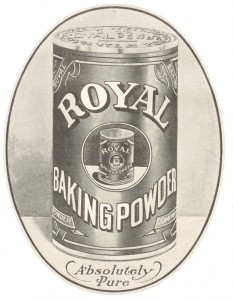 A very homely illustration has been used to make clearer what “within” means; — it is the paper design on the tin container of Royal Baking Powder. We see a series of containers, developing inwardly. In a similar way, we can think of halls of consciousness, opening, one within the other, not until they stop thus opening, but until the eye and mind can no longer follow. 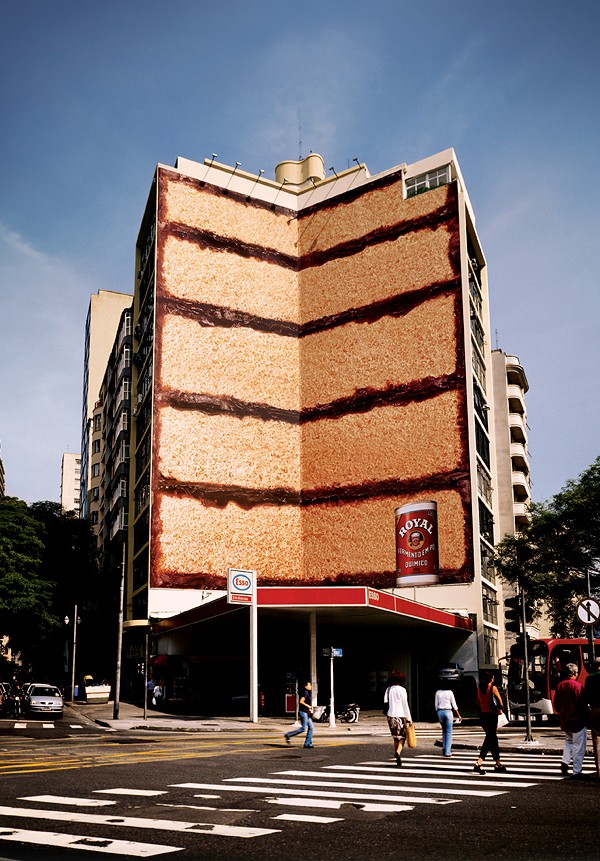 Royal Baking Powder: the ingredient that makes the cake rise

Taking over two huge walls of this bizarre-shaped building and making it look as if it’s a cross-section of a massive cake. This campaign instantly turned the building into a landmark and a talking point, while staying relevant to the product. 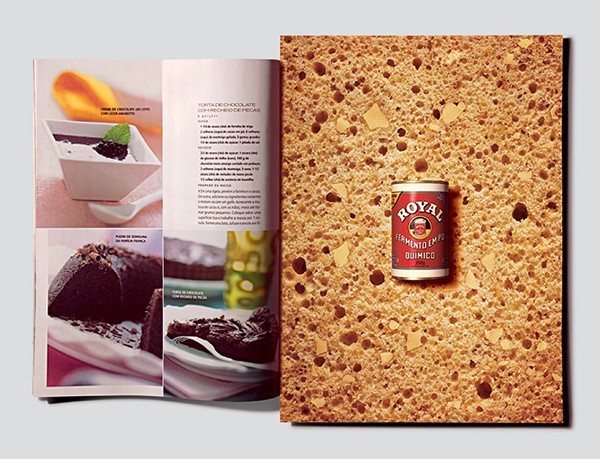