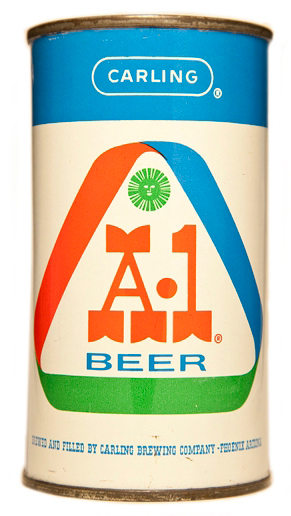 Last night I dreamt I was at some bar, talking with the bartender about vintage beer can packaging.

Maybe he could have told me who originally designed the tri-color Mobius strip logo for A-1 beer, but I didn’t think to ask him.

The photo on the right shows the logo I’m thinking of. It’s from William Legoullon’s 2010 “A-1 Country” series.

LeGoullon became intrigued with the story of The Arizona Brewing Company as well as its flagship beer, A-1, a true symbol of southwest beer-drinking culture.  …Though many people have never heard of the brewery itself, its emblematic history, the evolution of its branding, and the symbolic narrative of A-1 have become primary influences on LeGoullon’s “A-1 Country” works.

It’s true that there were many evolutionary steps to A-1’s branding and package design over the years, but, it’s those versions of the packaging with the Mobius strip logo that I’m most interested in today.

There were earlier versions of this label with the brand name “Lancers” set in a script font, but to my mind, this version (with the chunky, wave-shaped terminators in the “A-1” typography) shows A-1’s branding at its most highly evolved.

Was this version a refinement that Carling introduced after its 1964 buy out of the brand? Or was it developed sometime before that? (as suggested by the bottle label below which does not include the brand name “Carling”)

In his History of The Arizona Brewing Company, Ed Sipos mentions a Phoenix-based “Curran-Morton Advertising” agency that was brought in to help promote the brand in 1962. Maybe someone there created A-1 Beer’s Mobius strip motif. 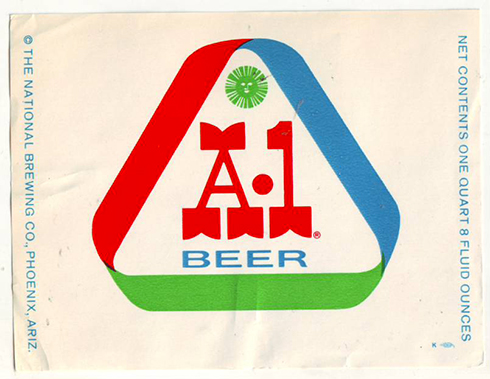 An A-1 Beer bottle label from Домашняя страница

(More about the A-1 Beer brand, after the fold…) 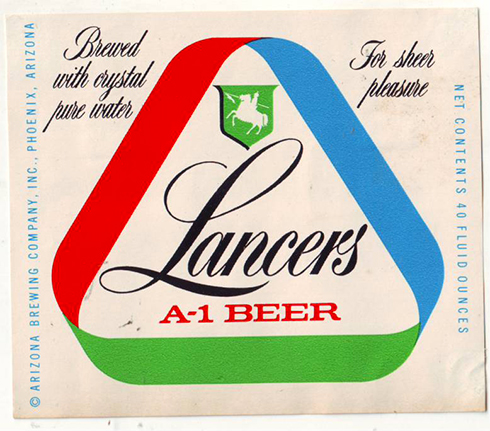 Regarding the evolution of one small part of this label…

Sometime around 1957, Anheuser-Busch threatened a lawsuit over the eagle used in A-1’s logo since 1942. The giant brewer charged that the eagle was too similar to the one associated with Anheuser-Busch. Many local drinkers referred to A-1 as “Arizona Bud” at that time. The A-1 brewery could not afford the legal expense of a court battle, so the issue was settled quietly by discontinuing use of the eagle in their packaging altogether. In January 1958, the eagle was replaced by a knight on horseback holding a banner with the name “Lancers”.

from The History of The Arizona Brewing Company

Hence, the earlier Lancers version of the Mobius strip label had a green shield with a silhouetted knight, which was itself replaced by a green sun with knock-out facial features.