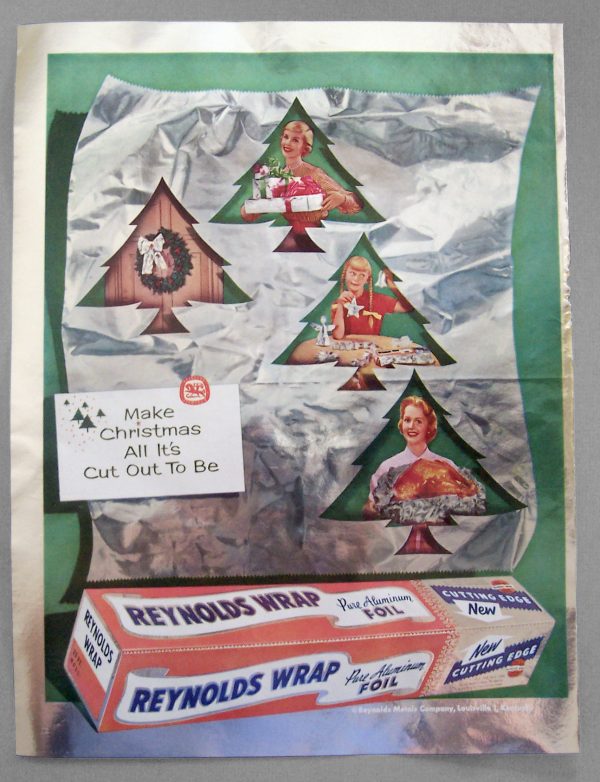 You might think that a 1955 Reynolds Wrap ad would be “old school” rather than “cutting edge.” But take a closer look at the vintage packaging at the bottom of the ad and you’ll see that box is touting its new “cutting edge.” 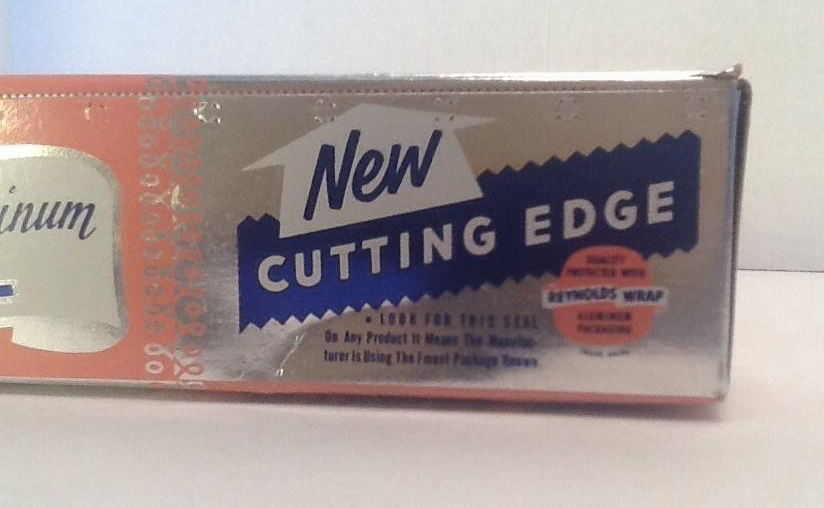 Modern Packaging magazine wrote in 1962 that Reynolds Aluminum “… is credited with introducing the metal cutting edge on foil-wrap containers.”

To be clear, boxes with integral cutting blades had been around since at least the mid 1920s. So while Reynolds may have introduced a new “cutting edge” in 1955, it wasn’t necessarily a cutting-edge cutting edge.

Reynolds Wrap (aluminum foil) is now on retail food store shelves in a new carton with serrated metal cutting edge which makes it much easier to tear off proper length of foil as it is unrolled. Shipping cases for Reynolds Wrap have been redesigned, too, for easier opening and identification.

National Association of Retail Grocers of the United States Bulletin, 1955

The adverting agency known as Buchanan & Co., Inc. filed the copyright registration for this ad’s headline—”Make Christmas All It’s Cut Out To Be.” This document also tells us that the ad was published in the December 1955 issue of McCalls.

We wouldn’t be showing you this ad, however, if were just a matter of Reynolds Metals suggesting some off-label “Christmas craft” uses for their aluminum foil.

Reynolds printed a series of ads on aluminum foil and this is one of those ads. We’ve written before about their printing technique. They used opaque white ink in some areas and let the foil background show through in others. “Cutting-edge” —in the figurative sense— for advertising in the 1950s. (See: Printing Ads on Aluminum Foil)

With ads like this, they created a reverse trompe-l’œil effect by printing a picture of aluminum foil on real aluminum foil. You do see real reflections, but you also see a printed depiction of crinkly foil.

In 2017 I bought a couple of these printed-on-aluminum-foil ads. First, I bought a 4-page trade ad (published in a 1954 issue of Printer’s Ink.) And then, I bought the first full color consumer ad ever printed on aluminum foil (published in the April 1955 issue of Better Homes & Gardens.)

Is there anyone on your Christmas list who digs “cutting edge” artifacts? If so, the Christmas ad above is (still) for sale from Ads by Dee for $9.00.

Note: We did a whole Reynolds Wrap Week of posts at the end of 2016. See also: Reynolds Wrap Reindeer and The Revolutionary “Alumidor” pack from that series.