I bought this hybrid beer/soda can on ebay.

I got this can years ago from a man that worked at the Falstaff Beer factory in St. Louis MO in the 60s-70s. The can is a misprint can, only known one of its unique design.

The can is made of tin, it has a Busch Bavarian label printed over the top of a Pepsi-Cola label, then it was topped with a Pabst pull tab lid.

The seller noted two overlapping printed labels (Busch and Pepsi), but there is also a third printed brand, which I didn’t immediately notice either.

The light brown and yellow plates turn out to be part of an A & W Root Beer label. I found examples of all three cans (printed as they were intended) on ebay.

At first, this can reminded me of other, more famous printing errors. The Inverted Jenny stamp. The 1955 double die penny. But those are famous accidents and while there are examples of upside-down and double-printed cans, this can was no assembly line accident. Someone made it deliberately.

And I have a theory about that.

Maybe I made a mistake in comparing my so-called “misprint” can to a rare and valuable stamp or coin.

It’s much more like end-of-day glass, where glass factory workers repurpose wasted broken glass (after hours) to make stuff for themselves.

What makes me think so? The seller of our hybrid Busch/Pepsi/A&W can told us that he got the can from “a man that worked at the Falstaff Beer factory.”  And I recall another man, working at a beverage canning factory also made an unauthorized, “after hours” can.

“Our rarest can was for Marlboro beer. Yes, beer. Philip Morris owned Miller Brewing Company. They tested a line extension in the early 70s. Dad worked for Continental Can Company. A few sheets of can blanks were lithoed for a packaging test — but Miller pulled the plug even before the testing started.

Since Dad knew we were nuts about cans — he trimmed out one of the blanks and had one of his guys run it through a production line during maintenance one night — and, voila, Marlboro beer can.

Probably the only one in existence as the rest of the litho sheets were sent back to the paint shop to dial in other designs before being scrapped.”

See: “Our Rarest Can”

This sort of extra-curricular, after-hours production must have been fairly prevalent. 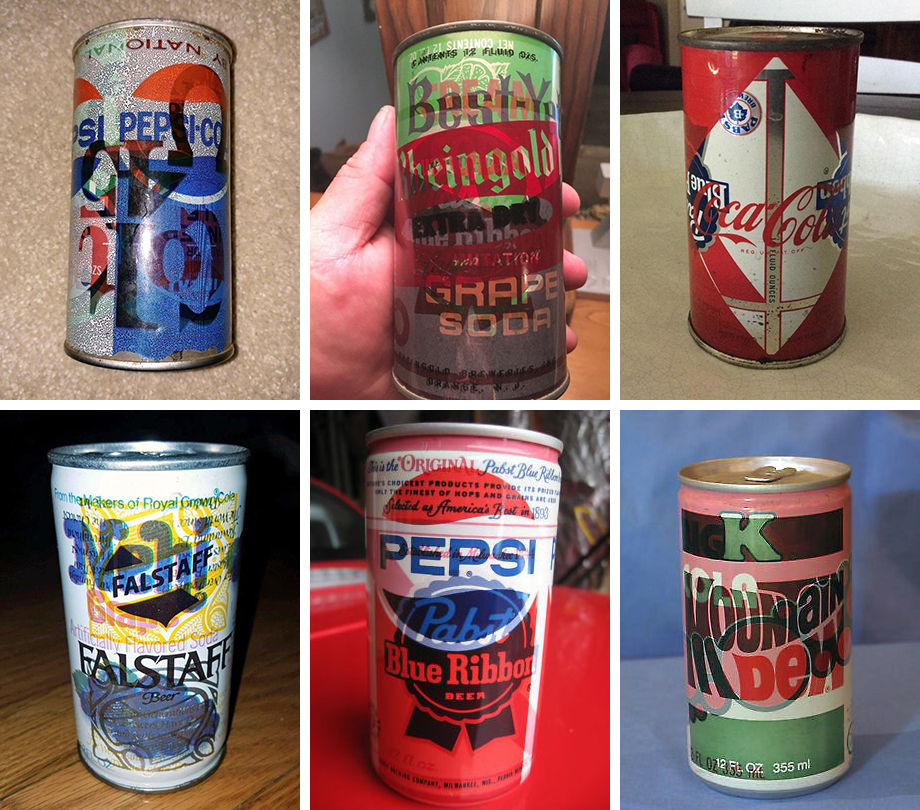 I’ve no doubt that beverage canning facilities produced plenty of misprinted can blanks. And it may have been a common practice to reuse these spoiled blanks for test printing of other plates, resulting in an overlapping mashup of brands. The decision to actually form these commercial collages into cans, however, was a deliberate creative choice.

How else can we explain why so many of these cans are sealed, but empty? 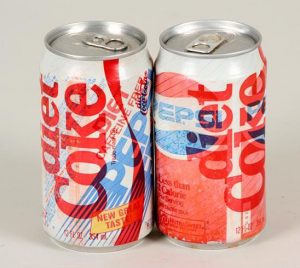 Are these anonymous end-of-day artists? And, if so, what was their motivation in making these non-functional packages? The paradox of a hybrid soda and beer can? A hilarious mashup (or shotgun marriage) of competing brands?

There’s also abstraction in these overprinted, overlapping brands. Something sort of Postmodern.