On the other hand, if this photogram really did appear in an advertisement, then maybe it contributed to a larger, more persuasive message. [If anyone has ever seen the ad, please let me know!]

What is an “advertising photogram” anyway? Why had I never heard the term before?

As it turns out, Photograms were widely touted in the 1940s for their commercial potential in advertising. Although occasionally deployed in advertising, “advertising photograms” never really caught on in a big way.

Photograms not yet fully exploited

Paul Rand promoted the use of photograms in advertising his 1947 Thoughts on Design:

The idea of the photogram or cameraless photography goes back as far as the 18th century… One of the first to apply this technique in advertising art was the constructivist, El Lissitzky, who, in 1924, designed a poster for Pelikan inks. [on right] … In advertising, the photogram has yet to be fully exploited.

Although the effectiveness of the photogram depends chiefly on straightforward mechanical methods (light on sensitized paper), it offers the designer ample opportunity for esthetic, manual control. In a sense, it is not a picture of the object, but the object itself…

Of course, designers are unlikely to ever “fully exploit” advertising photograms now. How many photographers are equipped even to make photograms now that digital photography has made light-sensitive paper an obsolete medium?

But what if the history of advertising had gone differently?

August Sander made an advertising photogram for a glass manufacturer that sold for $50,000 at a 2012 Sotheby’s auction.

All things being equal, a one-of-a-kind photogram would naturally tend to fetch more money at auction. (As opposed to a conventional photograph, printed in a multiple series from a negative.)

Although the photogram­… was very much a part of the artistic zeitgeist of his time, this is believed to be the only extant photogram by Sander, and as such is unique within his oeuvre. The photographer’s great-grandson Julian Sander suggests that this image may have been produced for Schott AG…

… he has tackled the photogram technique with great assurance. Glass, because of its transparency and ability to bend and intensify light, makes an ideal subject for a photogram, and in this image Sander has exploited these qualities to great effect.  The concentric rings of the bowl’s shape, and its orbit of beveled sections, present an energetic and rhythmic composition.  The inclusion of the hand suggests the bowl’s utilitarian qualities.  In all, Sander has presented the object both as a literal form and a compelling abstraction.

A Show of Hands: Photographs from the Collection of Henry Buhl
Sotheby’s, 2012

With such a high “hammer price,” you would think that the ad in which Sander’s photogram appeared should also be worth something. Maybe so, but how do we find such an ad amongst German paper ephemera from the 1930s? The photographer’s great-grandson suggests that maybe the glass manufacturer was Schott AG. But if we confine our search to only Schott’s glass advertising from the 1930s, it may turn out that we’ve followed the wrong path. (See also: All the Young Dudes Album Cover: illustrated in 1917) 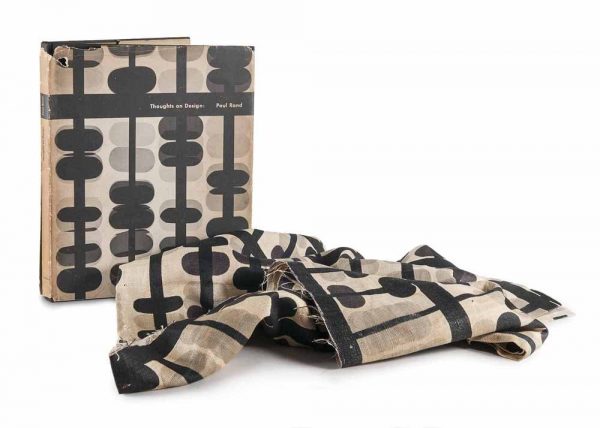 Paul Rand made some his own photograms of his own. His “abacus” photogram is probably the most well-known. He used it both as a book cover and as the basis for a fabric design.

In 1949, he argued on behalf of the photogram’s limited color palette:

Although this photogram is technically a light and shadow picture of an abacus, it is primarily a pattern of light and dark forms that seem to move vertically across the surface. Because the photogram is an abstraction the plastic qualities of the object become more important than its literal ones.

… the visual power of the photogram lies in its black, white, and gray tonality. The photogram portrays a world of light, shadow, and darkness peopled by mysterious suggestive forms. The ability of these forms to stimulate varied and imaginative associations in the mind of the observer is menaced when the photogram is rendered in color. It may still be an effective work of art, but its peculiar evocative power may be destroyed.

Like most of us, Rand sometimes broke his own rules. On the other hand, he does give his permission to make “color” versions of black & white photograms. The color rendering does not destroy “an effective work of art” — only its “peculiar evocative power.”

Who else did not heed Rand’s warning about color in photograms?

Sol Mednick made a series of photograms for Plymouth in 1944. For the final advertisements he rendered his photograms in red, green and blue.

Popular Photography magazine devoted 3 whole pages to these photograms. (The 1945 article entitled, Photograms Tell a Story, is reproduced below…) 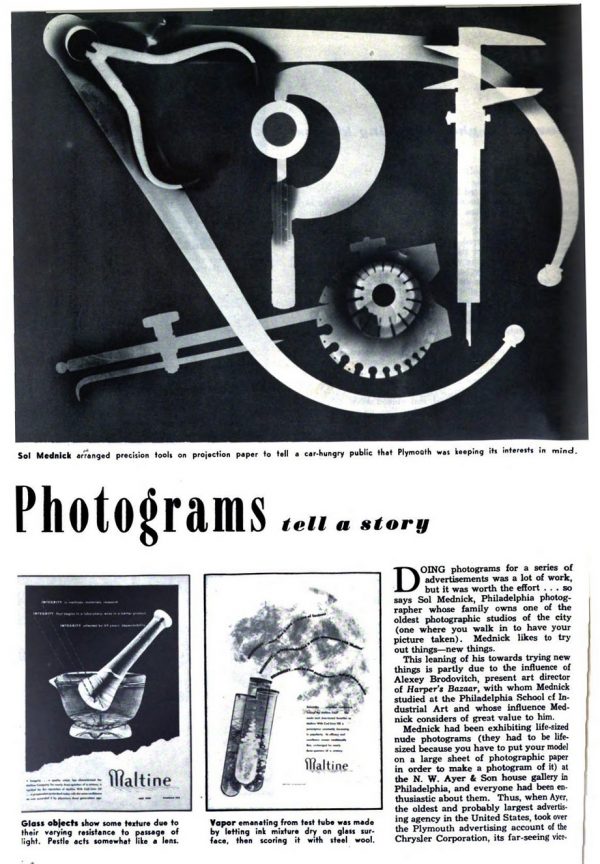 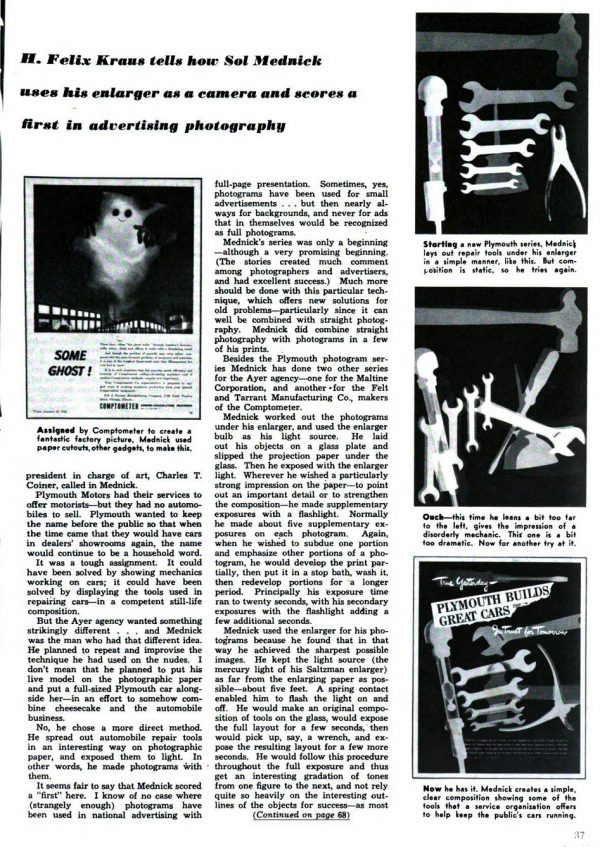 Probably more of Sol Mednick’s photograms were published in magazine ads than anyone else’s.

He produced a series of advertising photograms in a 1948 campaign for Carrier Air Conditioning & Refrigeration. These photograms were not “rendered in color.”  Six of the ads are shown below.

At the bottom of each of these ads is a credit line reading: “A PHOTOGRAMATIC INTERPRETATION BY MEDNICK.” 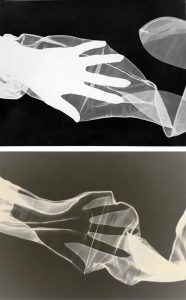 Herbert Matter “produced photograms sporadically after the mid-1940s.” He made these two fetishistic photograms (of silhouetted hands within stockings) in 1955. According to Artnet, Matter created them for “fashion use” but they were never published.

Matter also made photograms which were “rendered in color” for the cover of Fortune Magazine. The 1943 Fortune cover below is one example. 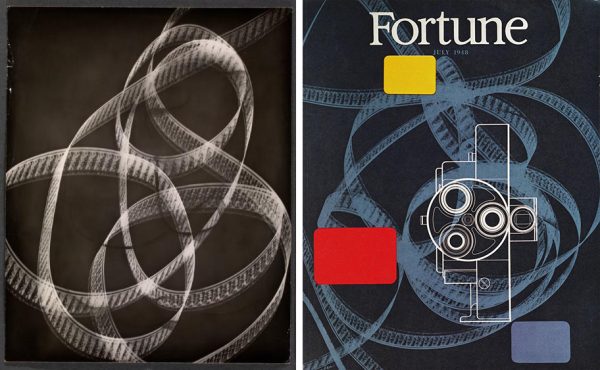 There are things about photograms that might have made them well-suited for package design. Yet “packaging photograms” fared no better than “advertising photograms.” Why not?

In our next post, we will look at a few examples where it was tried and why it never quite caught on.