If you’re like me and you check your website’s stats on anything like a regular basis, you may learn about things going on in the world that you wouldn’t otherwise know about.

For example, I always know when the greenhead flies are in their biting season. How? Because the stats for my 2009 post about packaging and greenhead fly traps always shoot way up.

In a similar way, I found out about Steve1989’s acquisition of an unused WWII “Air Crew Lunch” pack, because the stats of a 2010 post I wrote on the subject were inexplicably high. 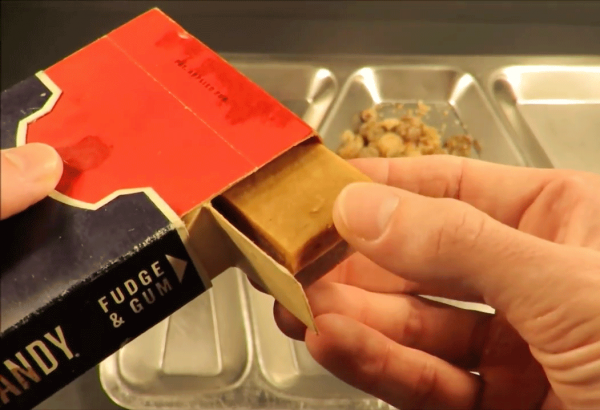 Like me, Steve is from Florida. Unlike me, Steve reviews MRE & Rations, dating back from 1863 until now. But he doesn’t just unbox these foods. He also tastes them. (So long as their inedibility is not super-obvious.)

The graphic designer of the box remains anonymous. We do know, however, who designed the structure of the box. Container Corporation filed the patent application for their “Dispensing Carton” in 1945. In that document they cite three employees: Robert De S. Couch, Earl C. Potter and Edgerton A. Throckmorton.

In addition to the Air Crew Lunch, Steve1989 has also reviewed the contents of another well-designed, (but vintage) meal-ready-to-eat…

Above we show Steve’s review of the 1940s “supper” edition of the “Morale Series” K-Rations that we wrote about in 2010.