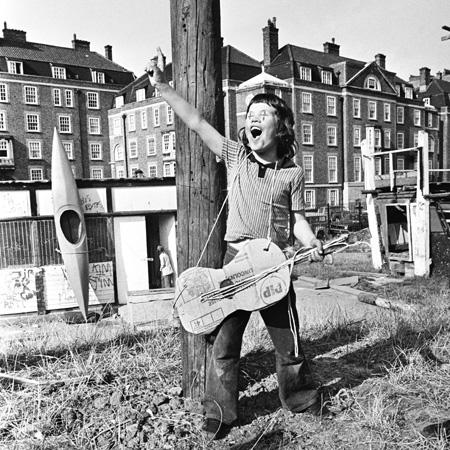 For obvious reasons I really like Mick Rock’s photo of this English boy, outside with his cardboard guitar. (I’m guessing the kayak must have been for Regent’s Canal since I don’t see any other bodies of water on a map of Camden Town.)

We went to the opening of Mick Rock’s Glam! show on Staten Island a couple weeks ago. This photo was there.

The original cover photo for Mott The Hoople’s classic Bowie-produced album “All The Young Dudes” … Why it wasn’t used I can’t remember, nor can Ian Hunter, must have been a chemical shift.

A chemical shift or just a really bad executive/creative decision? The album cover that they ultimately went with— [Update: I was wrong and not just about the illustration being 1940s style…]

In my second year at college, I remember going to a Providence record store to buy that album and just cringing when my girlfriend at the time held it up and, from across the store, called out, “Randy, here’s Mott the Hoople!”

I think I might have held my head a little bit higher, if the English boy with the cardboard guitar had been on that album cover instead.

Updates: Our Interview with “Dude ’72”  and  Dude ’72 and his “PIP” brand cardboard guitar