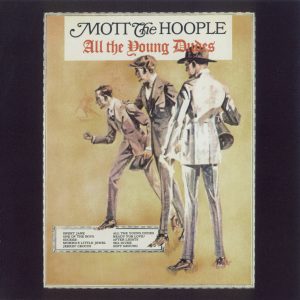 The single package that this blog has probably devoted the most attention to [here & here] is the cover of the Bowie-produced 1972 Mott the Hoople album: All the Young Dudes.

I never liked this cover, but, for me, it exists in a paradoxical sort of “Schrödinger’s cat” dimension, where the record simultaneously wears two completely different covers. (And it’s the other cover that I prefer.)

I’m no physicist and package design is not quantum mechanics. Schrödinger’s cat was a thought experiment in which a cat was simultaneously alive and dead—but, clearly, this 1972 album cover is not a matter of life and death.

So why am I writing (yet again) about an album cover that I don’t much like? I recently learned some new things about both versions of the cover.

In today’s post (part 1 of 2), I’m sharing what I’ve learned about the cover with the illustration.

To my mind’s ear, the song [All the Young Dudes] will always sound as if it’s wafting scratchily from my teenage bedroom, where it’s forever 1970-something and my off-brand record player is set to repeat. I’m lost in the illustration on the cover of Mott’s All the Young Dudes …

… how did the sharp-dressed trio of Gatsby-esque guys on the jacket relate to the title track or, for that matter, glam? Were they the young dudes of the song? Given the obliquity of the lyrics, fans bent on exegesis mined everything, even the record cover, for hidden meanings.

Mark Dery, All the Young Dudes, Why Glam Matters, 2013

I used to think that the illustration had been done by George Underwood, but reading Mark Dery’s 2013 essay, All the Young Dudes, Why Glam Matters, I finally came to understand that it was a vintage illustration that Mick Rock had appropriated (and George Underwood had then tinted) for the design of the cover.

To be sure, they look like college students, maybe 1920s Ivy Leaguers; their fashion dates them, unmistakably, to the Jazz Age. Then, too, the painting itself was done in the jauntily elegant style of ’20s illustrators like J.C. Leyendecker…

Was the image on the Mott LP a reproduction of an old illustration, one of Leyendecker’s Saturday Evening Post covers, maybe? Or just a ’70s take on period style?

Either way, was the designer—in this case, the photographer Mick Rock, portrait painter to the court of glam—putting ironic quotes around the manliness of the
hail-fellow-well-met guys in the picture by dropping them onto an album called All the Young Dudes?

Dery had interviewed Mick Rock and confirmed that the illustration had indeed come from an old issue of Saturday Evening Post.

Reading that, I immediately wanted to see if I could unearth the 1920s illustration that M. Rock had chosen to use. It took some doing, but eventually I did manage to find it.

Although the chaps in the illustration may typify what we now think of as a 1920s look, the illustration did not really come from that decade. It came from a black and white 1917 ad for Society Brand Clothes. 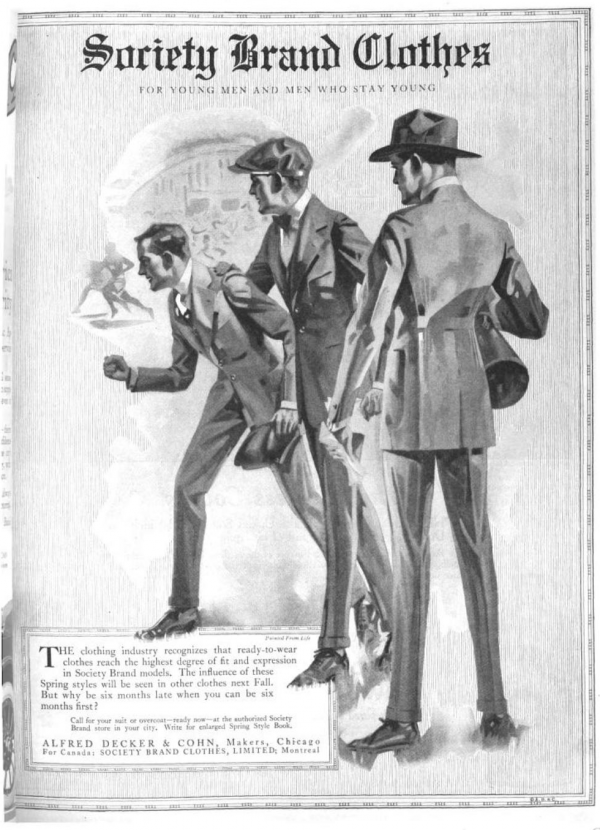 This explains a lot. The slogan — “FOR YOUNG MEN AND MEN WHO STAY YOUNG” — must certainly have stuck M. Rock as an appropriately specific reference. (Young men = young dudes) The old English typeface came from the Society Brand Clothes logo. The bad swash typography that the band’s name was set in, was an anachronistic 1970s touch.

(More about Society Brand Clothes, etc. after the fold…)

In his essay, Dery connects the style of the “dudes” illustration to the gay subtext in the work of J.C. Leyendecker— whose illustrations for clothing manufacturers (like Arrow Shirt) constituted a sort of cultural Trojan horse.

The frat boys on the Mott cover seemed to be cheering their team on from the sidelines of a football game—a manly enough activity, although one of them appeared to be holding a megaphone. (Cheerleading? Not manly!) Another had a proprietary hand on his buddy’s shoulder; his buddy, in turn, was shaking a flaccid fist at the opposing team.

Not that it matters, but now that we can see the original ad more clearly, I think the sporting event that the young dudes are cheering might actually have been a race, rather than a football game. Dery goes on to quote David Kamp’s assessment of Leyendecker’s work as “stunningly subversive: unabashed homoerotica slipped right under … America’s—nose.”

It might be a mistake, however, to imagine that no one had “gaydar” in those days…

Recent showcards put out by Alfred Decker & Cohn in behalf of their Society Brand clothes have an artistic quality that cannot help but make them welcome in any store for window-trimming purposes. The same is true about cards put out by Hart Schaffner & Marx and other clothing manufacturers.

If one were in a critical mood he perhaps might say that the window cards put out by these big clothing firms are too good to be true—that they represent types of flawless and almost beautiful men, youths and boys that you don’t find on this earth.

Leyendecker was new to me, but looking at his paintings online, they seem superior to this illustration and nowhere can I find any mention of his having ever done work for Alfred Decker & Cohn or Society Brand Clothes. So if Leyendecker didn’t do the “dudes” illustration, who did?  I don’t know.

One 1912 ad includes an illustration supposedly depicting “the Studio of the Advertising Department” of Society Brand Clothes. This studio has too few artists and way too many models to be very credible. 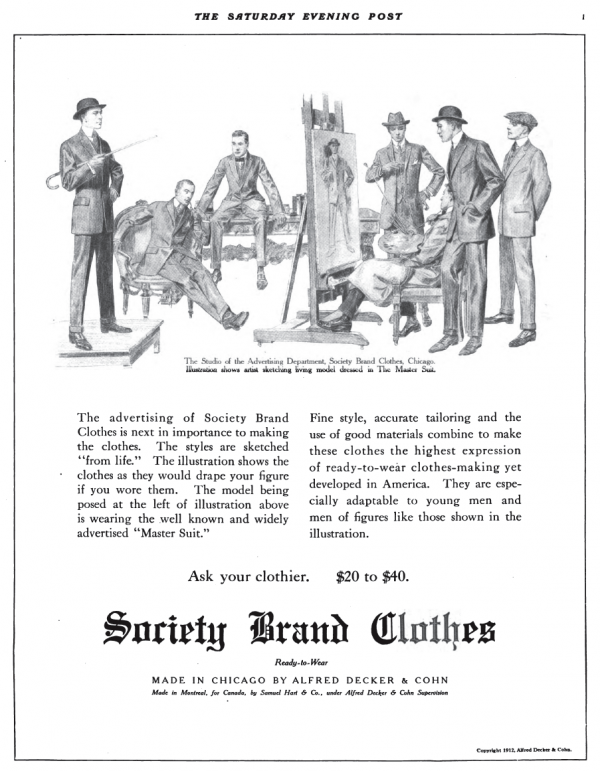 The original 1917 “dudes” ad includes a caption that says “Painted From Life,” and yet no painter is ever credited. There is only a copyright line © A.D. & C.—for Alfred Decker & Cohn, the owners of the Society Brand Clothes. 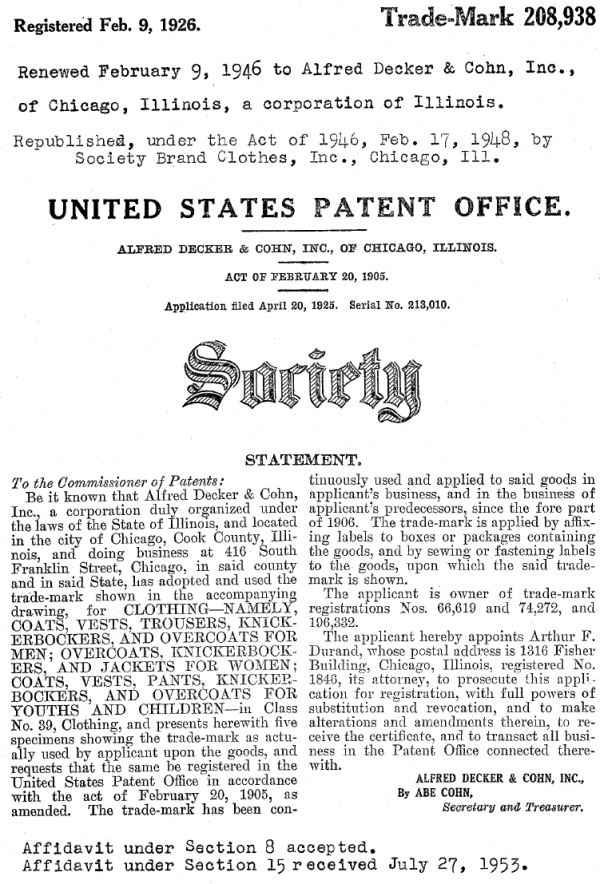 One reason that the “dudes” illustration might not match the quality of Leyendecker’s paintings is that it was originally intended for reproduction in newspapers.

The spring advertising for Society Brand Clothes, made by Alfred Decker & Cohn, Chicago, will appear in 124 of the larger cities of the country. Twenty-nine college papers have been added to the list of publications used and the advertising will appear also in general circulation periodicals.

The “dudes” illustration was part of a larger campaign in which Alfred Decker & Cohn hired lithographers (who themselves, often employed illustrators) to print “adverting cuts.” The printed ads were then sent out to clothing stores wishing to advertise the fact that they carried ready-to-wear suits manufactured by Society Brand Clothes.

from The Printing Art Suggestion Book, 1913

The painted young men in the “dudes” cover illustration have a cut out look against a background of vertical black lines. That’s a feature of nearly all of the Society Brand Clothes newspaper ads from the 1917 campaign. 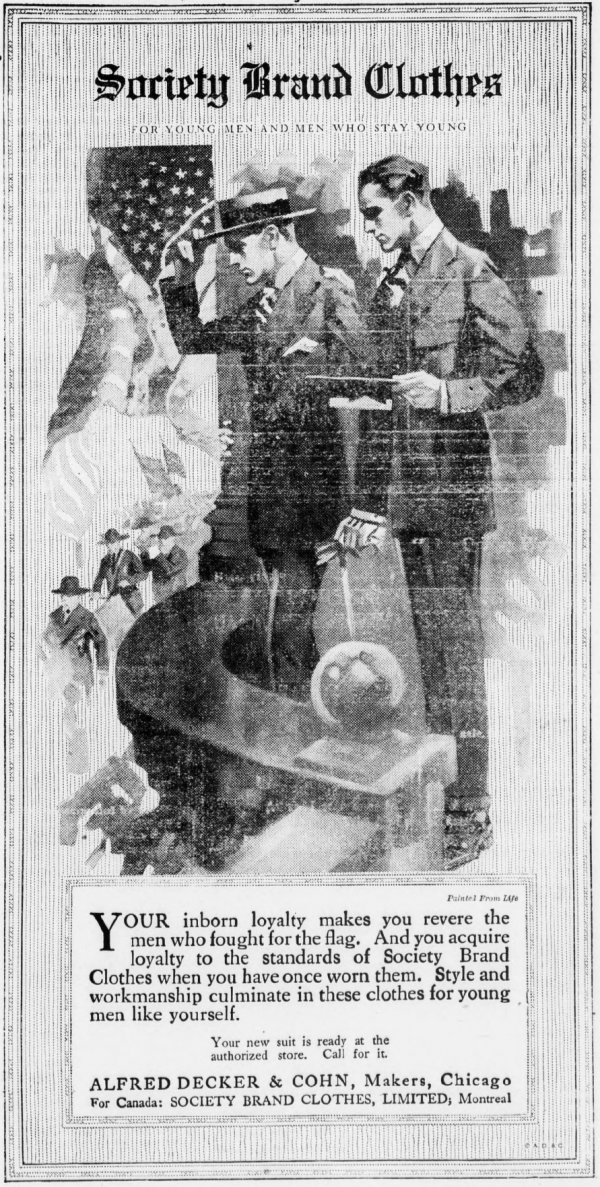 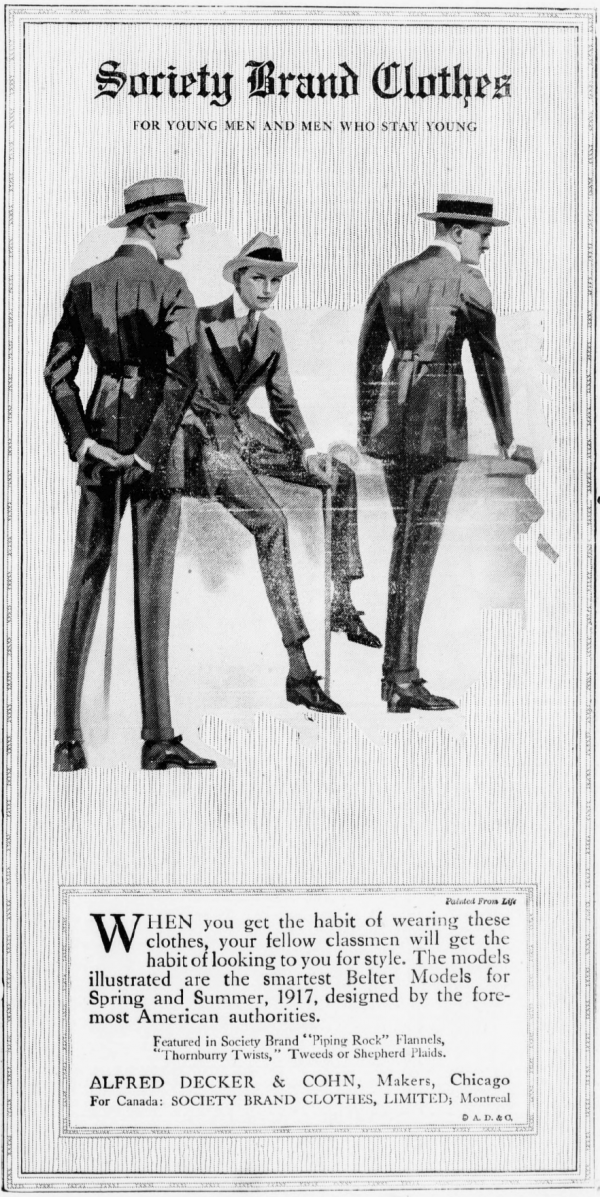 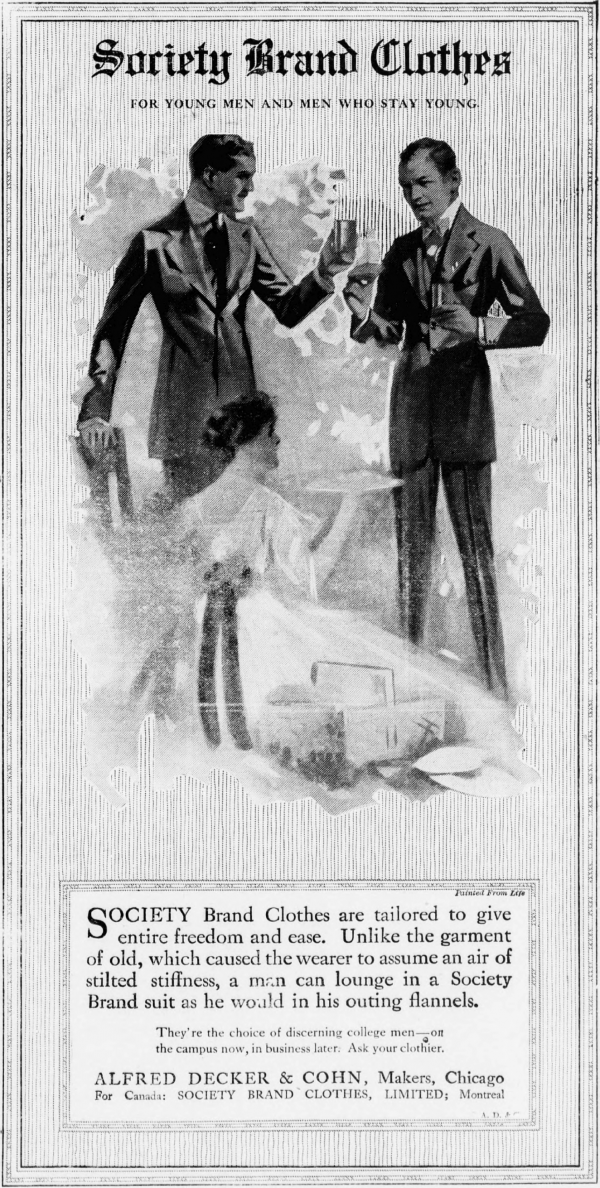 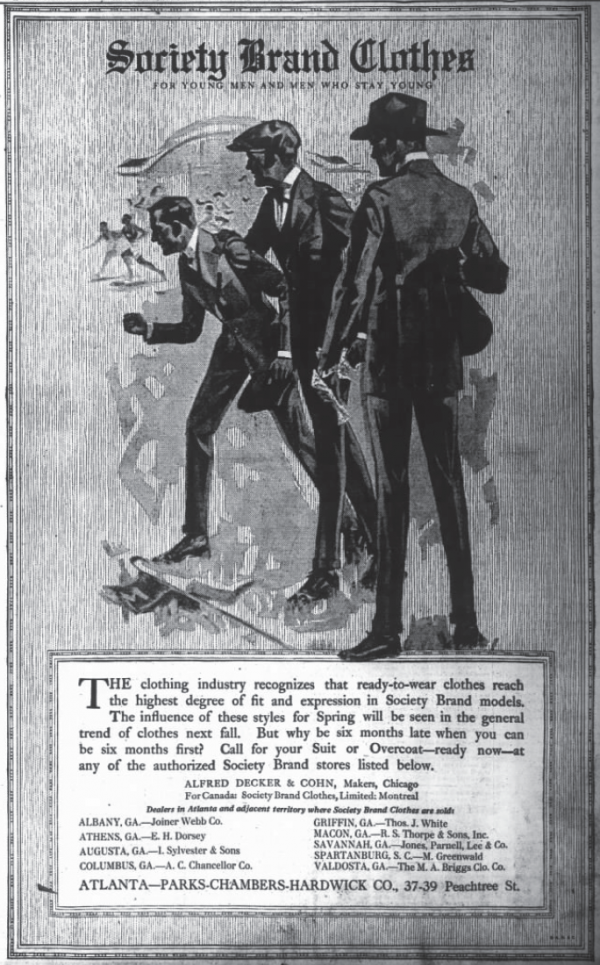 Also interesting to note that our 1917 “dudes” have not always appeared as a trio. 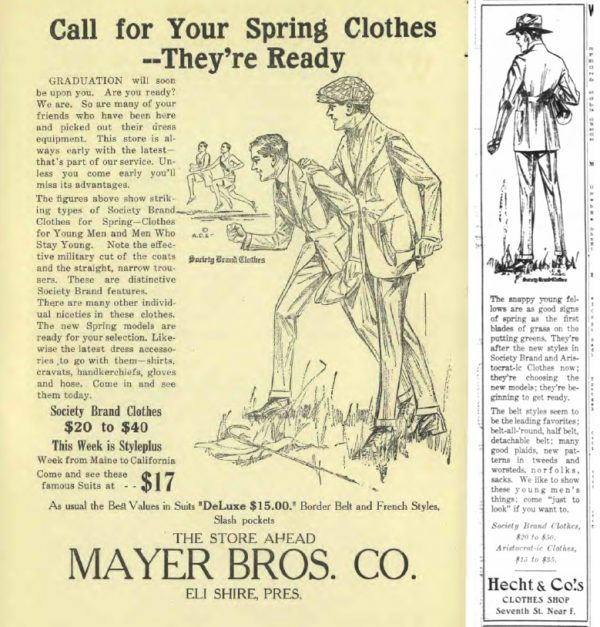 Question: What other album was also released in 1972 with an appropriated Saturday Evening Post illustration on the cover? Answer: Pure Prairie League.