Yesterday’s post about the beaded bottle, led me to the subject of Angostura Bitters.

Some consumer products were once marketed as patent medicines, but have been repurposed and are no longer sold for medicinal purposes. Their original ingredients may have been changed to remove drugs, as was done with Coca-Cola. The compound may also simply be used in a different capacity, as in the case of Angostura Bitters, now associated chiefly with cocktails.

Angostura’s unusual oversized label derives from Trinidad’s laid back philosophy. One day a new batch of labels were ordered and a simple sizing error meant that the labels were a little larger than normal. Rather than fix the problem, which was spotted in good time, they kept the faulty batch of labels, thinking that someone would eventually go about the task of correcting the error. No one did. So when the current supply of labels ran out, they simply attached the oversized labels, thinking that someone would correct the next batch. No one did. Again. And thus was born a trademark that is recognized throughout the world. 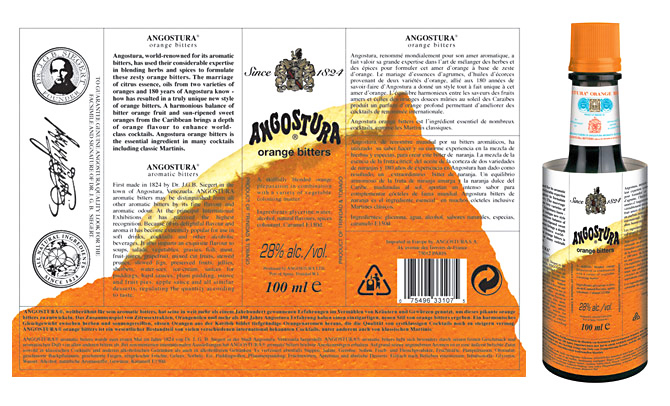 Despite its 19th Century origins and happy-accident label branding, the company still has found ways to extend its product line and to provide work for graphic designers. Above, is Robert Henry LLC’s label for Angostura Orange Bitters. (See also: Package as Skin)

But the most surprising thing to me about Angostura Bitters, is how recently this 19th Century product has been in the news—and essentially because of problems with its packaging!

(Rachel Maddow and the Angostura Bitters shortage, after the fold…) 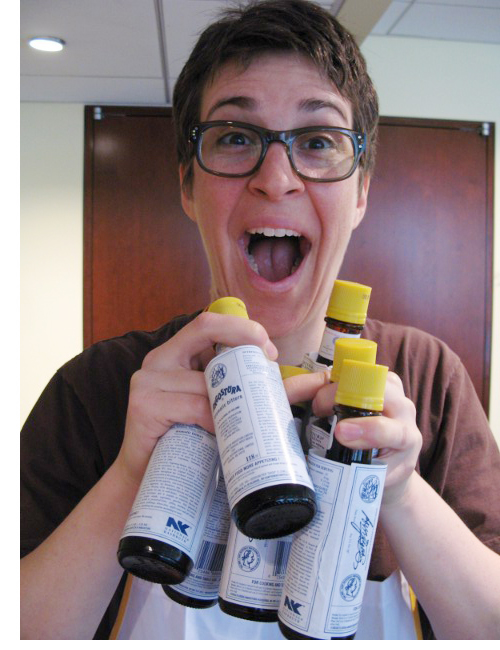 A very positive brand boost for Angostura, although it might tend to create a worrisome impression that Rachel Maddow could be bought off with an armful of bitters.

Still, the company assures its consumers that it was a shortage of containers—and not a shortage of contents—that led to the 2009 hiccup in bitters production. Their bottle supply has apparently been restored, but if in the future they need find another source of bottles, I’m thinking Uganda might be a good place to look.