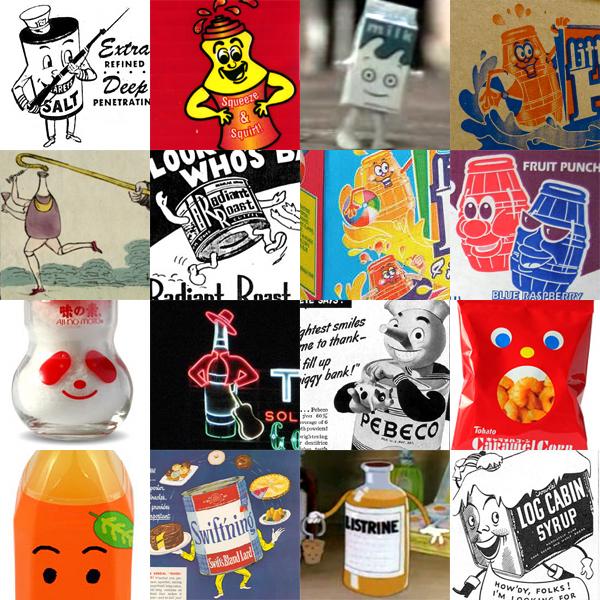 A couple weekends ago, the dog and I were standing by the utility pole out in front of the house. I was just standing there. He was doing a bit more. I saw a discarded plastic bottle whose label (below-left) featured a cartoon illustration of a bottle with a smiling face. I picked it up for closer examination. “Big Burst” from American Beverage Corp. I peeled off the label and—(once the dog was finished)—tossed the bottle into the recycling can. Couple days later, I saw another discarded Big Burst bottle across the street and deduced that the deli on the corner must sell ’em. That’s where I bought the orange-flavored bottle (below-center) and where I also found this Big Burst carton (below-right).

Anthropomorphic cartoon-product mascots used to be pretty prevalent and a lot of them are still around. Usually they are a food-come-to-life sort of thing. But product mascots in which the character is the product’s package “come to life” are little more unusual. Sort of like Droste effect packaging meets Fantasia. Or maybe it’s just the inverse of our recent tendency to think of ourselves and other people as packages. (See: Who’s That Brand?) People are packages and packages are people. 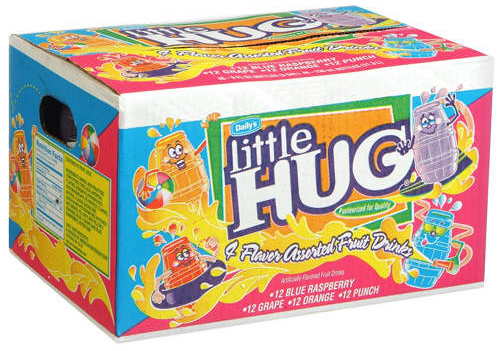 Looking into the mysterious “Big Burst” bottle, I stumbled upon several other examples from the same company. American Beverage Corporation also makes “Little Hug” and “Teenie”—both of which feature anthropomorphic bottle illustrations. How many other package mascots are out there?

(More packaging mascots, after the jump…)

I don’t want to count the Kool-Aid pitcher/man, because even though it is a container-come-to-life on a product package, it’s really a cross-referential package rather than a self-referential one. (like Jarritos) Since Kool-aid is sold in packets rather than in pitchers. (Anthropomorphic packets, I would be interested in seeing.)

And, fond as I am of him, neither do I want to include Mr. Peanut. Yes, I know—an unshelled peanut could be considered a type of package since it protects and contains the edible part—but, that’s a whole other subject.

I did find some old stuff that qualifies… 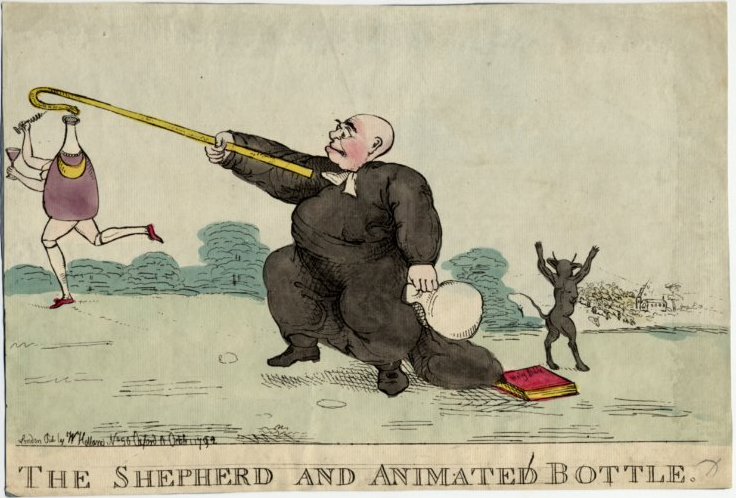 The Shepherd and Animated Bottle, a 1792 Hand-colored etching from The British Museum

Tio Pepe, a Spanish sherry manufactured by the Gonzalez Byass [1]  company, has used an anthropomorphic bottle in their advertising for over 100 years. 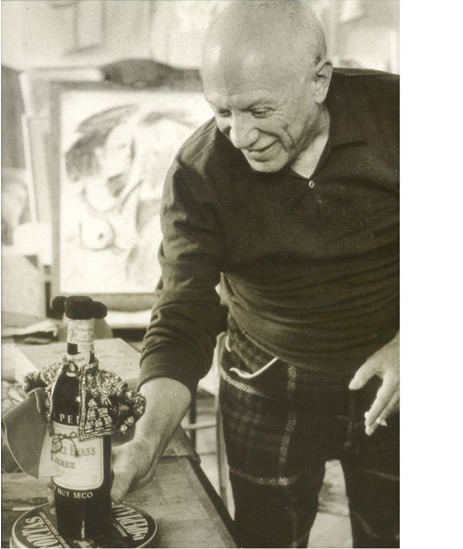 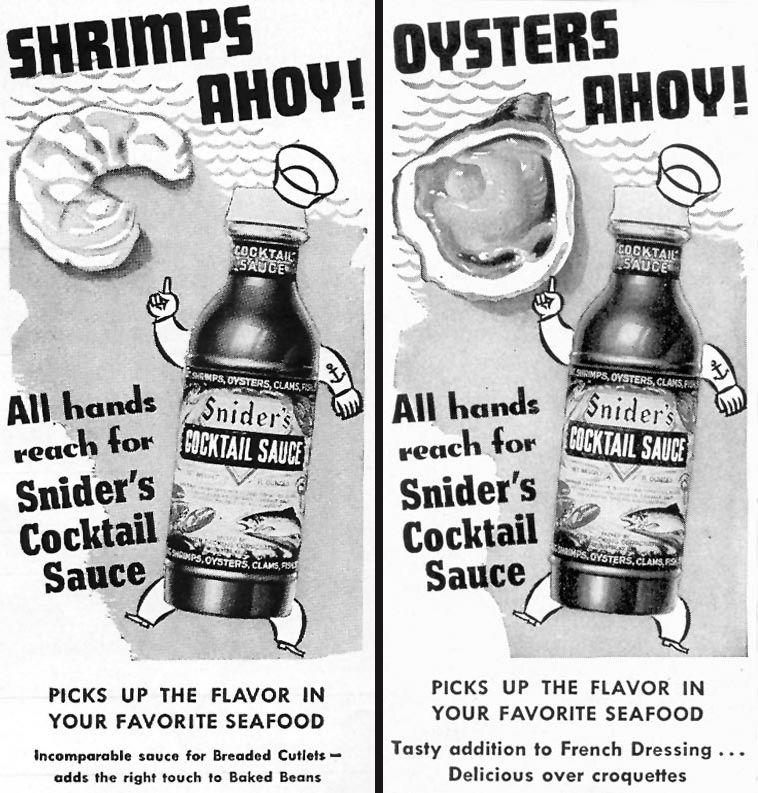 Snider’s ads from from The Gallery of Graphic Design site

1948 Swift’ning. On the left from The Orphange of Cast-off Mascots; on the right from The Gallery of Graphic Design site 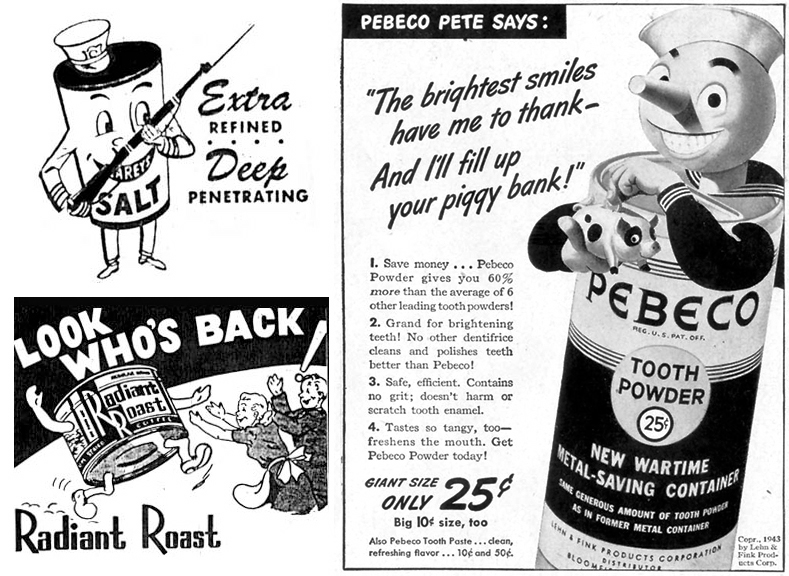 1951 Carey’s Salt & Radiant Roast from The Orphange of Cast-off Mascots; 1943 Pebeco from The Gallery of Graphic Design site 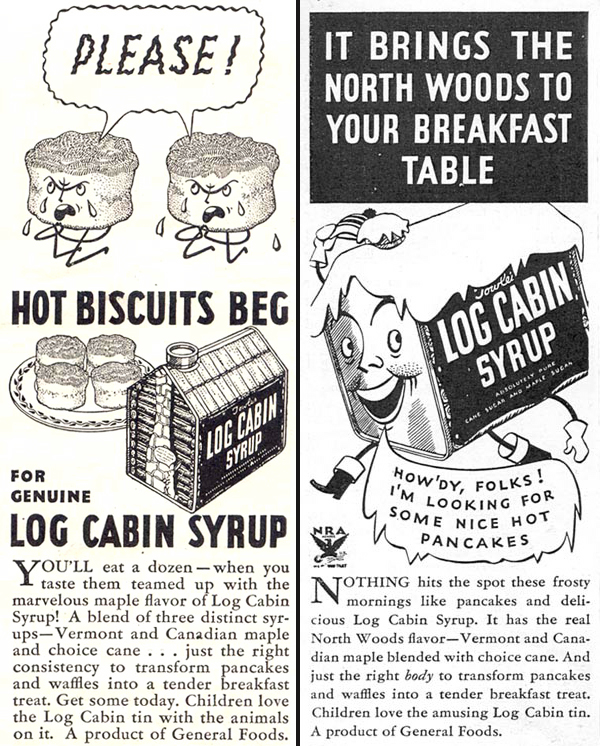 Log Cabin syrup ads from The Gallery of Graphic Design site. The ad on the left shows an interesting log-cabin shaped syrup package and a propensity for bringing food products to life; the second ad shows the anthropomorphized log-cabin/package.

Part of a wider human tendency to project reassuringly human characteristics onto objects in the world around us, anthropomorphic packages seek to reassure the consumer: it’s safe to buy the product.

Not that packaging coming to life, is always such a reassuring thing. Below is the 1936 MGM cartoon, “Bottles,” in which a number of different bottles become animated and scary mischief ensues. (Notable cameos by Absorbine Jr. and Listerine)

From the Big Cartoon Database

Another nice animation of packaging occurs in the video for the song, “Coffee & Tea” by the band, Blur. Here, a gable-top milk carton is brought to life via stop motion animation. Pathos and tragedy and a nice use of the lost-child-on-the-milk-carton in the plot.

And finally, we have a Suntory commercial showing another, perhaps more modern type of anthropomorphic package: not a hackneyed illustration of a package with arms and legs, but an actual package, labeled with a face. It’s structural integrity—as a bottle or a can, etc.—more or less intact. Here, there is clearly some type of psychological reassurance at work. Comfort food?

Two Japanese companies, Suntory and Tohato, both seem to specialize in packaging with faces. 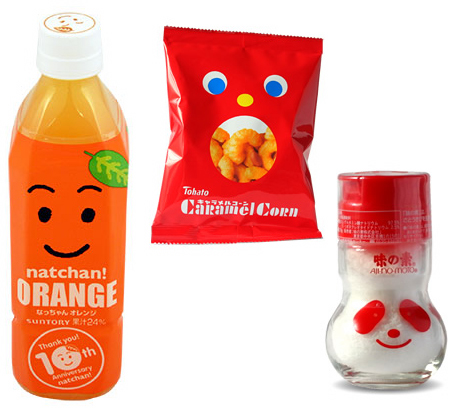 Not that Suntory is above adding some arms and legs to their packaging, as well. Check out the Natchan! party.

There must be other contemporary examples that I haven’t found—both of the illustrated, package-walking-around-with-legs type, as well as the more minimal, package-has-a-face variety. I’d welcome further contributions.