Cora Gated in the News

In addition to the 1953 article touting the introduction of “Cora Gated” in the Sandusky Register-Star-News, there were other, periodic news items featuring Hinde & Dauch’s female trade character.

The short squib on the right was published in the same paper during the same year. Naturally, any “history of Miss Cora Gated” would need to be a “brief” one since she had only been in existence less than a year!

From the Gastonia Gazette, 1956

Many of the ads portray her as an entertainer of men. 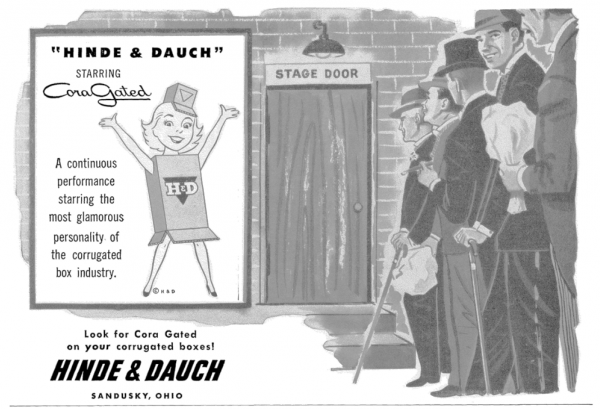 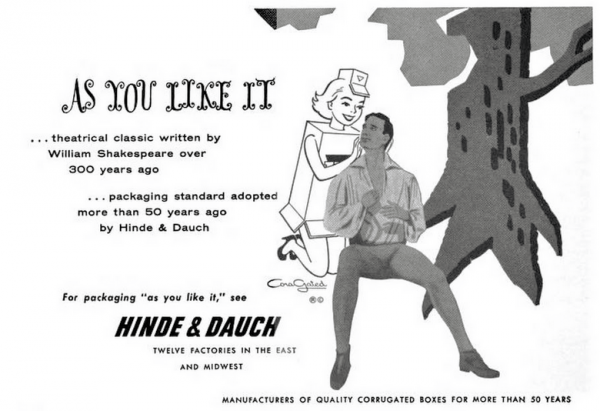 In most of their advertising from 1955 to 1958, Cora Gated appears on a stage with an audience. While the president of the company was concerned about the character’s apparel avoiding the pitfalls of changing fashion, it’s really this advertising campaign that has not aged well. 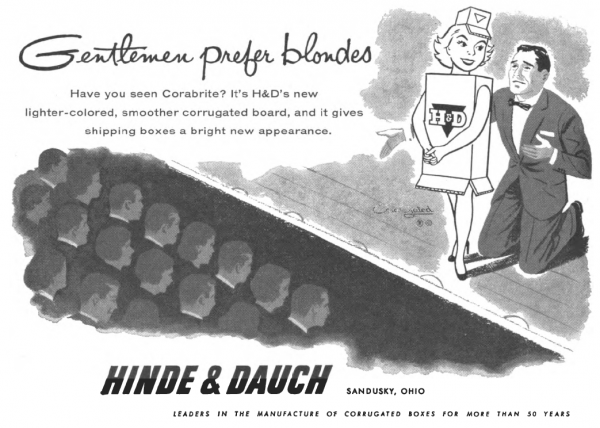 The company changed course a little bit in the ad below. Here we see Cora at a graduation being celebrated for her academic accomplishments as a “packaging major.” But whatever activity is depicted, it’s always the same stock audience watching the stage.

(Her “Corabrite” dress, mentioned below, was a new corrugated board, better suited for printing.)

Writers of this campaign made numerous references to movies, books, etc. that were popular at the time. [Mrs. Wiggs of the Cabbage Patch, Harvey, Peter Pan, Mr. Roberts, A Christmas Carol, Finian’s Rainbow (the stage musical)] 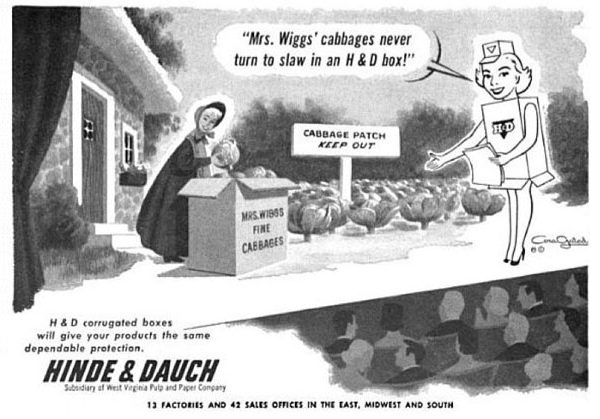 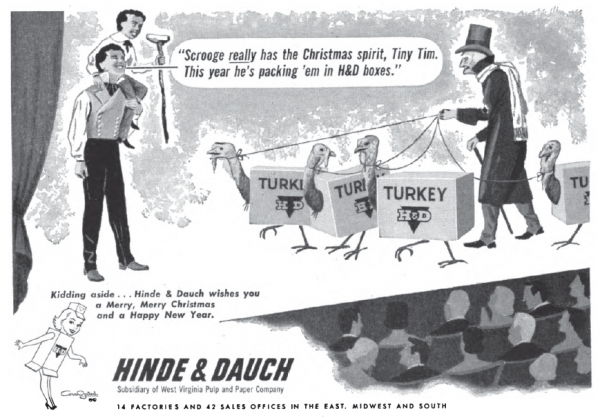 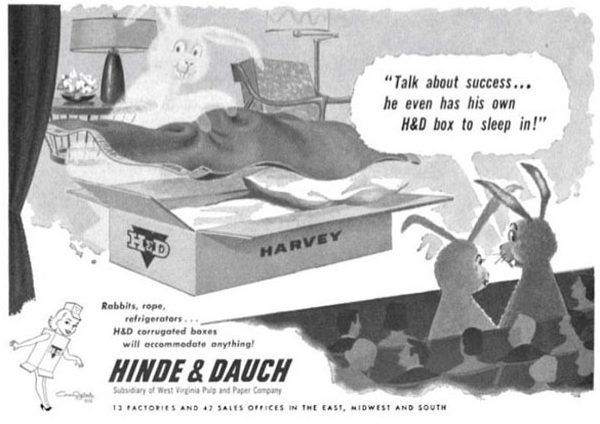 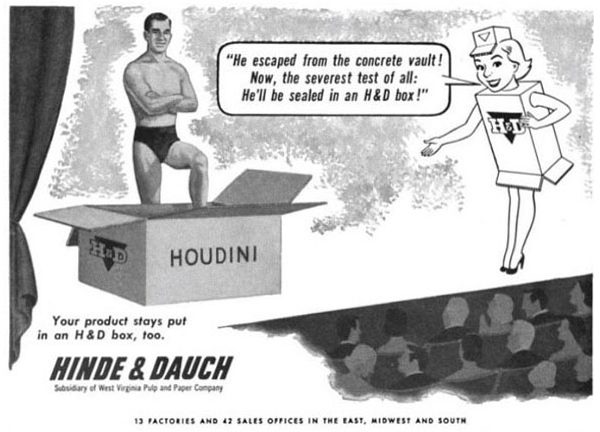 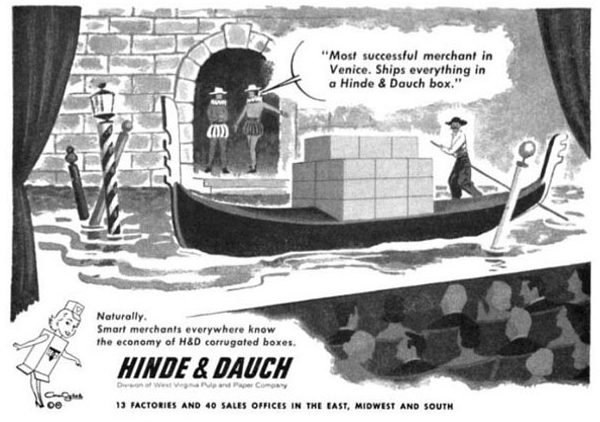 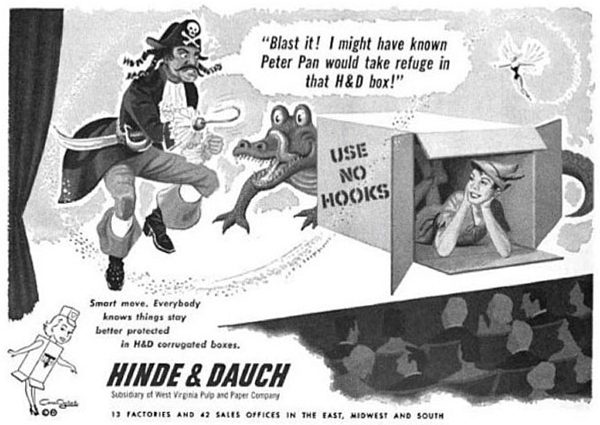 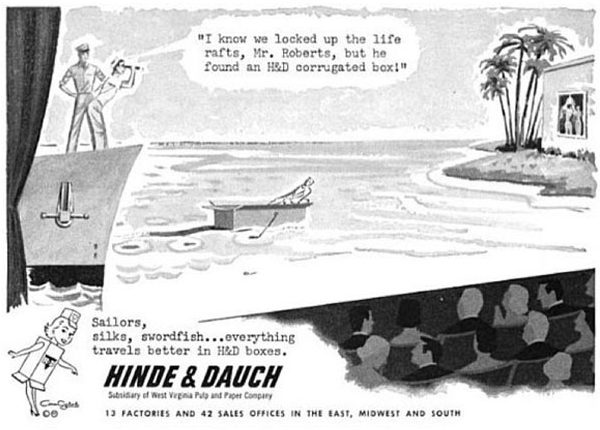 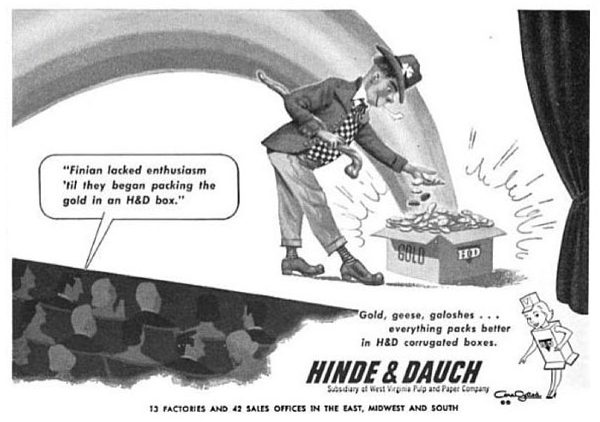 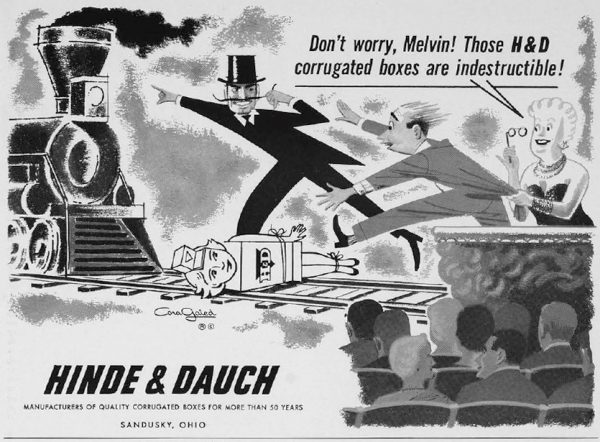 The racist caricature in the ad below came as a surprise. The same Snidely Whiplash villain who tied Cora Gated to the tracks in the ad above, reappears here with a pair of bloodhounds and a rifle. He is pursuing a young black woman. I’m guessing that she’s supposed to be the runaway slave, Eliza Harris, who fled across the Ohio river.

As with the other ads, the agency has glibly inserted an H&D corrugated box into the story.

On the one hand, the advertiser purports to empathize with the escaping “Liza.” (A member of the audience reassures his wife, saying, “Don’t worry Myrtle… Liza’s bound to arrive safely in that H&D box.”)

But on the other hand, the illustrator, the ad agency and the client all thought it was clever to portray Eliza as a pickaninny caricature, in contrast to the more realistically drawn white characters. Keep in mind, that various ivy league alumni publications actually published this ad — including a 1955 issue of the Princeton Alumni Weekly. 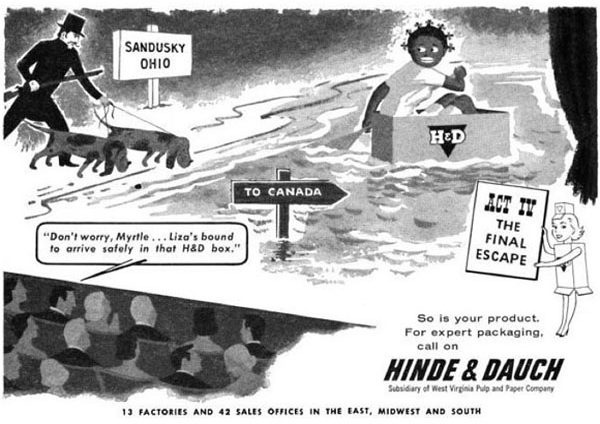 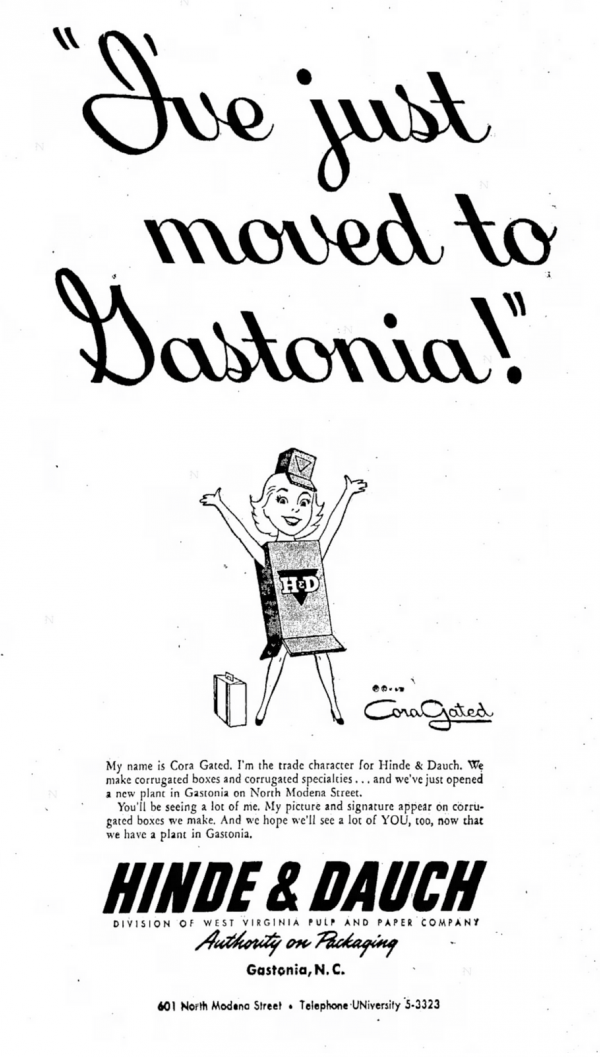 An ad announcing the opening of a new plant in Gastonia, North Carolina (Gastonia Gazette, 1955) 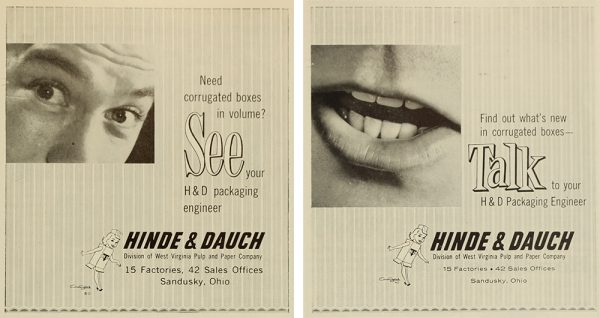 In these two ads from 1958, the company used photograph’s of man’s eyes and mouth, against a corrugated cardboard background. Their trade character was given a smaller role, more befitting a logo. 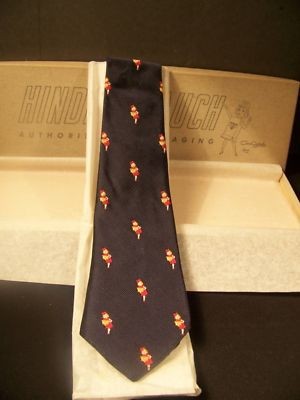 In addition to the “Cora Gated ” Zippo lighter that we showed earlier, H & D put out a number of other promotional products featuring their trademark character.

I’ve read about a Cora Gated jigsaw puzzle, but could find no photos of  a surviving example.

The silk necktie on the right was one such product. Someone bought this tie on 2011. Ebay has long since removed the high-res photos, but this small, low-res photo comes to us via Worthpoint.

A seller on eBay is now offering the deck of Hinde & Dauch playing cards below $48.88. The Cora Gated trade character appears on the box and on the back of card against a blue corrugated background. 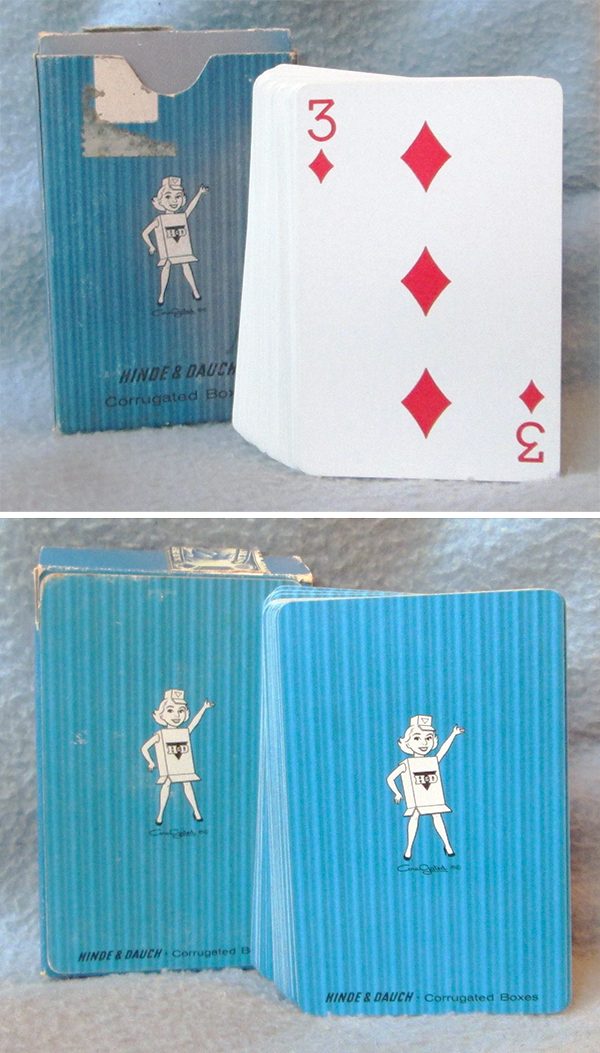 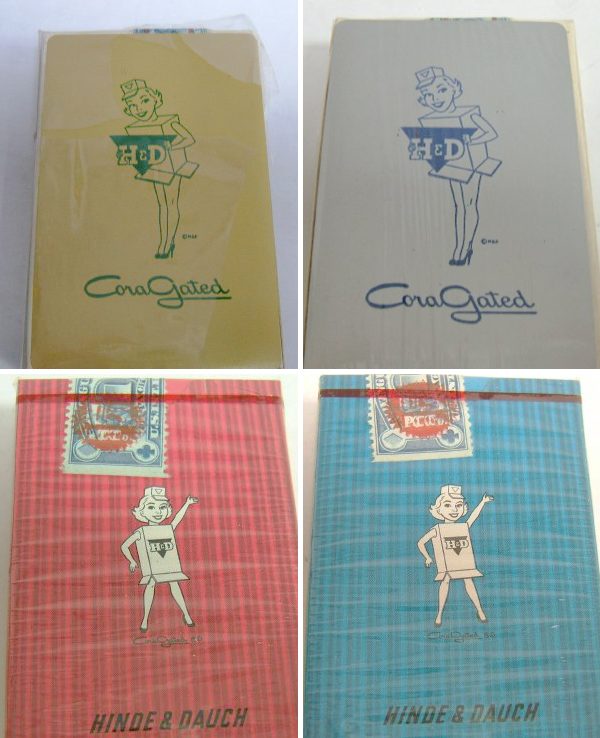 The 4 packs above were part of Charles E. Frohman’s collection (via: The Rutherford B. Hayes Presidential Library) 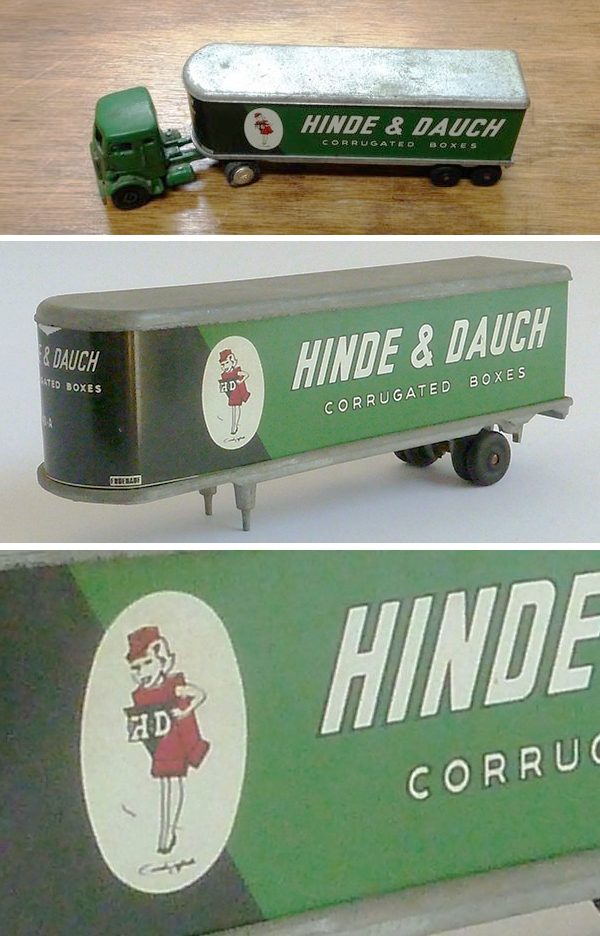 Based on the testimony below, the Cora Gated trademark appeared on Hinde & Dauch trucks, although the only remaining visual proof (that I can find) are the model tractor-trailers shown above.

My dad and uncle worked for “Hinky Dink” [Hinde and Dauch] … the Sandusky, Ohio firm that originated corrugated paper and the corrugated box. … H&D opened a Canadian arm in Toronto in the 30’s and in 1947 my dad joined them.

… As a kid, I remember that out the back of the Etobicoke, Ont. plant there were always a few old [1950’s] trailers that were used for maintenance storage. I always loved the old H&D trailers that were sitting there; rusting but colourful reminders of a proud company that had invented corrugated boxes and the modern way of shipping everything.

The H&D trailers were yellow and black but featured “Cora-gated” a young woman dressed in a box… (a fashion plate to be sure) and were unique to the Canadian Division. But I remembered a green and black one… old and rusty. … It disappeared before too long but it made an impression on a young guy. … shift to 2004; MR’s Great Model Railways had a piece on a HO module with a H&D trailer in green and black; complete with “Cora-gated”…