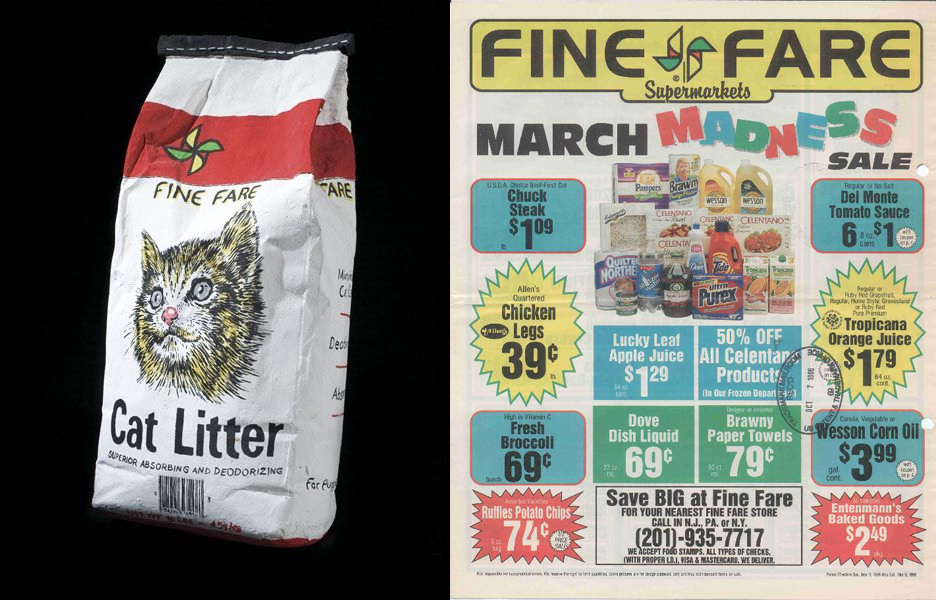 On left is one of Robert Gober’s 1989 “Fine Fare Cat Litter” sculptures. (From an edition of seven)…

With Cat Litter, Gober invokes a “hand-made-ready-made”, stemming from the Duchampian tradition. While Marcel Duchamp chose everyday, industrially produced objects as his ready-made works and elevated them to the status as an art object in the act of re-producing and declaring them to be so, Gober scrupulously recreates an already existing product; Gober uses plaster-casting and then paints by hand the imagery to imitate the real object.

In speaking about the Cat Litter sculptures, Gober explains, “The kitty litter I never saw as being that far a step from the wedding dress…for me the kitty litter was to a large degree a metaphor for a couple’s intimacy – that when you make a commitment to an intimate relationship, that involved taking care of that other person’s body in sickness and in health. If I had chosen to do a box of diapers, which is an equivalent of a bag of cat litter, it would have been obvious. But because I was juxtaposing a low symbol which a high symbol and a deflated symbol with an inflated one, people had a very hard time reconciling the two, and they had a hard time, I think, seeing that I could be connecting the two with some respect”

Fine Fare is a New York “Metro Area” supermarket chain. (There was also a UK “Fine Fare” but I don’t believe they are connected.) I like their multi-colored pinwheel logo on the Gober sculpture, which I think has inherent fine art associations having to do with color wheels and additive color mixing. The animated gif on the right is not from Fine Fare’s logo, but from the website of package printer, J.M. Fry Printing Inks.