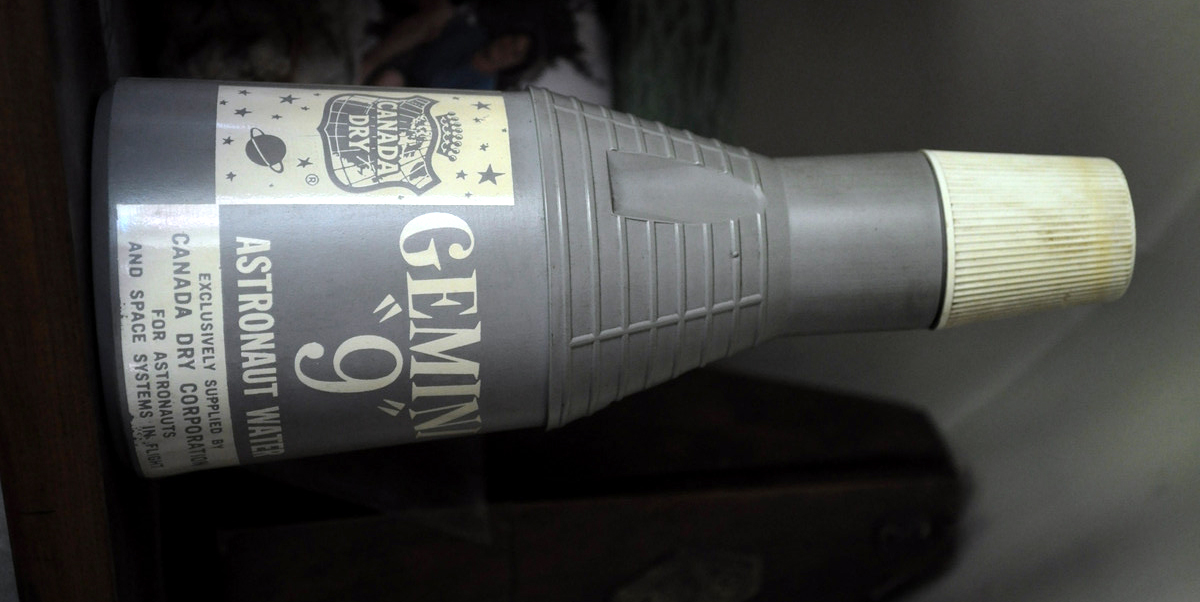 A detail from cbelt123’s photo, “Astronaut water from my dad’s basement”

Back in 2009, I wrote a post about Canada Dry’s mysterious Astronaut Water that, in the 1960s, came in a space capsule shaped plastic bottle. Clearly, the product was connected to the Gemini space program, but I couldn’t understand how plain, bottled water could have been promoted in those days as a kids’ beverage—even if it was the same stuff the astronauts drank in outer space.

Recently I was contacted by John MacLean, now head of Target Flavors, who, in the 1960s had worked at Canada Dry Laboratories and was uniquely qualified to clear things up for me. 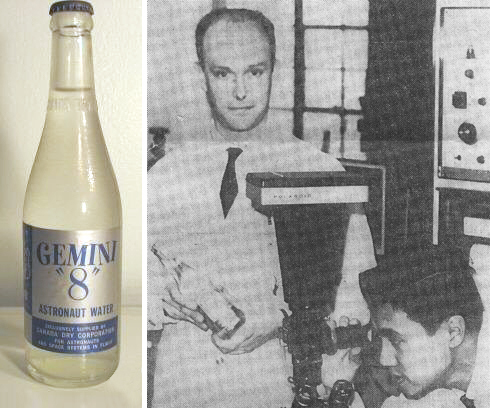 Maclean, shown in a 1965 press clipping above (holding, what I believe is, a Gemini “8” Astronaut Water bottle like the one on the left) explained to me that, despite its commerical packaging, Astronaut Water was never meant to be retail product. A small number of these bottles were distributed to the press as part of a promotional campaign to publicize Canada Dry’s important contribution to the space program.

John S. MacLean of Danbury, Conn., analytical chemist who drew up specifications for the water, holds a sample bottle of the triple distilled liquid. Not for sale to the public, Astronaut Water undergoes a thorough inspection at Greenwich Canada Dry Laboratories before it is used in space flights for drinking, reconstituting dehydrated foods and purging space capsule systems.

In contrast to today’s packaged water, which is generally promoted for its natural purity, Astronaut Water was publicized as a space-age engineering feat. Triple distilled in a platinum block… So pure that it doesn’t conduct electricity… (More of the water’s technical specs appeared in the 1966 “Press Reference Book” for Gemini Spacecraft Number Eleven, prepared by the External Relations Division, McDonnell Aircraft Corporation, on right)

The Gemini “8” bottle was an ordinary glass beverage-bottle, but for the Gemini “9” version, they really pulled out the stops, opting for the plastic, space capsule shaped bottle. Although MacLean could not confirm this, it seems likely that the matching space-capsule-shaped-bottle-shaped savings bank (below) was part of the same publicity campaign. 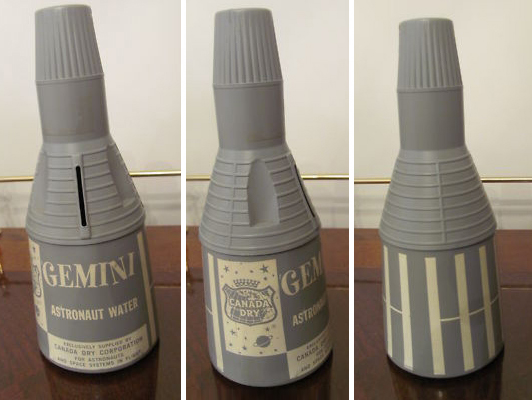 Once it had been made clear to me that it was journalists (and not children) who were the intended demographic for bottled Astronaut Water, I wondered if there were any articles to be found online about it…

(Astronaut Water meets the Press, after the fold…)

Jonathan Eberhart, Science Service writer, recently reported the following item: The latest Spage Age beverage is called Astronaut Water, but unfortunately only astronauts can get any. The “purest water in or out of this world” was provided for Gemini 8 Astronauts Neil Armstrong and David Scott by Canada Dry Corporation, better known for ginger ale than for space feats. But this is no soda pop. Astronaut Water exceeds the standards of both the US Public Health Service (PHS) and the World Health Organization (WHO) for amounts of dissolved solids, as well as for several more technical details such as turbidity and bacteria count.

For example, samples of Astronaut Water were evaporated and the remaining residues weighed to measure the solid content. The result: less than five solid parts per million parts of water. The PHS allows 500 parts per million, while WHO is even less strict with 1500.

Astronaut Water is not available from your friendly grocer, unfortunately. But even if you could get some, you would not want to pay Canada Dry’s price. In full 16-ounce bottles, even at the Government’s bulk rate, it would cost you several dollars a bottle. No wonder the space race is so costly!

The real secret of Gemini 8’s spin may have been revealed in an advertising story in the columns of the New York Times a week or so before blastoff, when the story of Canada Dry Corp.’s contract to supply water for the flight was told. In a press release date-lined Cape Kennedy, the company announced that it had been designated “exclusive supplier” of the water to be used during the walk around the world and pointed out that what it supplied was the “purest water in or out of this world.” Not to short-change its regular customers, Canada Dry pointed out that this water is basically the same as the water supplied in all Canada Dry products. And that’s where we got our clue. We use Canada Dry water all the time. Why? Because it keeps its bubbles longer than any water we have ever tried. So? Hic-ups in space are irresistible. Next time, if they’re smart, Gemini 8’ers will call for down-to-earth public water supply water, aerated!

Interesting discrepancy about the money: Industrial Water Engineering cites a government “bulk rate” supposedly paid for the water, but MacLean’s Connecticut newspaper clipping (below) reported that the water was provided to NASA “free for the duration of the Gemini Project.” 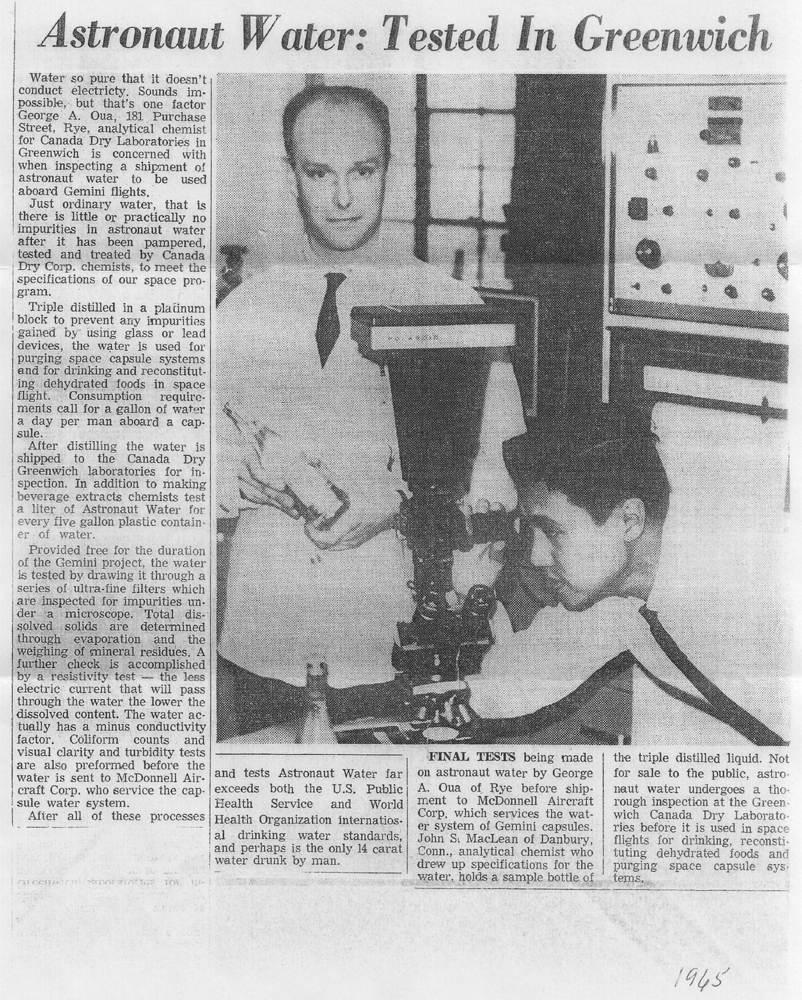 Many thanks to John MacLean for the news tip!