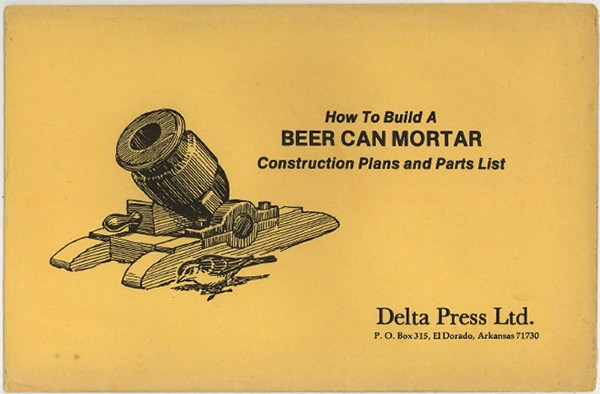 This packet contains plans to build a beer can mortar for purposes of safe entertainment and enjoyment. This device is not a mortar with a barrel made from a beer can, as assumed at first, but rather a more heavy-duty device designed to fire beer cans filled with sand or gravel up to 500 yards. As the literature itself states: “We can assume no responsibility for the manner in which the enclosed information is used.” Don’t hurt yourself or others!

Published by Delta Press in 1977, the publication is still available on their website for $4.95.

Billed as “The world’s most outrageous catalog” as if to suggest that the products they sell are all in outlandish good fun. The current issue of the Delta Press catalog, however, declares on its cover, “Survival at its best.” These are not the capricious gag gifts one might infer from “outrageous.”

Survivalists & militia groups seem to be their primary market (despite their literature being chock full of legal disclaimers like “All books sold are for academic purposes only.”)

Still, we like the vintage, engraving-style illustration of the Beer Can Mortar. The little bird is also a nice, if incongruous, touch. 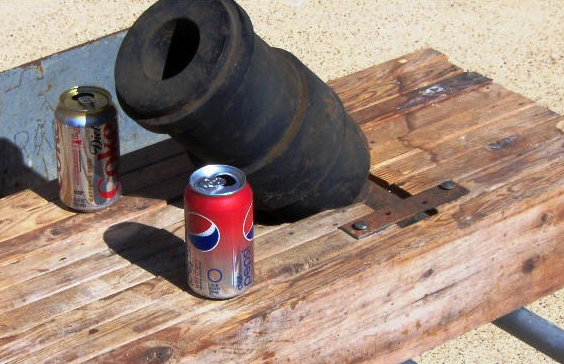 a beer can mortar from The Antique Cannon Superstore

In the “real” world of weaponized packaging, soda can mortars seem to be more prevalent than beer can mortars. This is reassuring, perhaps, to anyone concerned about projectile-launching while intoxicated.

Naturally, soda can mortar enthusiasts are happy to do what they can to perpetuate the cola wars.

The Diet Coke and Pepsi cans on the right have been filled with cement to better serve as mortar ammo. (photo from: Greybeard Outdoors forum)


While these beer and soda can projectiles are not improvised explosive devices, there is an element of improvisation to this type of recycling. The fact that these objects started out as packages, is more a matter of using whatever is “at hand.” Bottles have long been readily available (in a similar way) for makers of Molotov cocktails.

Survivalists, 2nd-amendment militiamen and armed insurrectionists are all still consumers, after all.