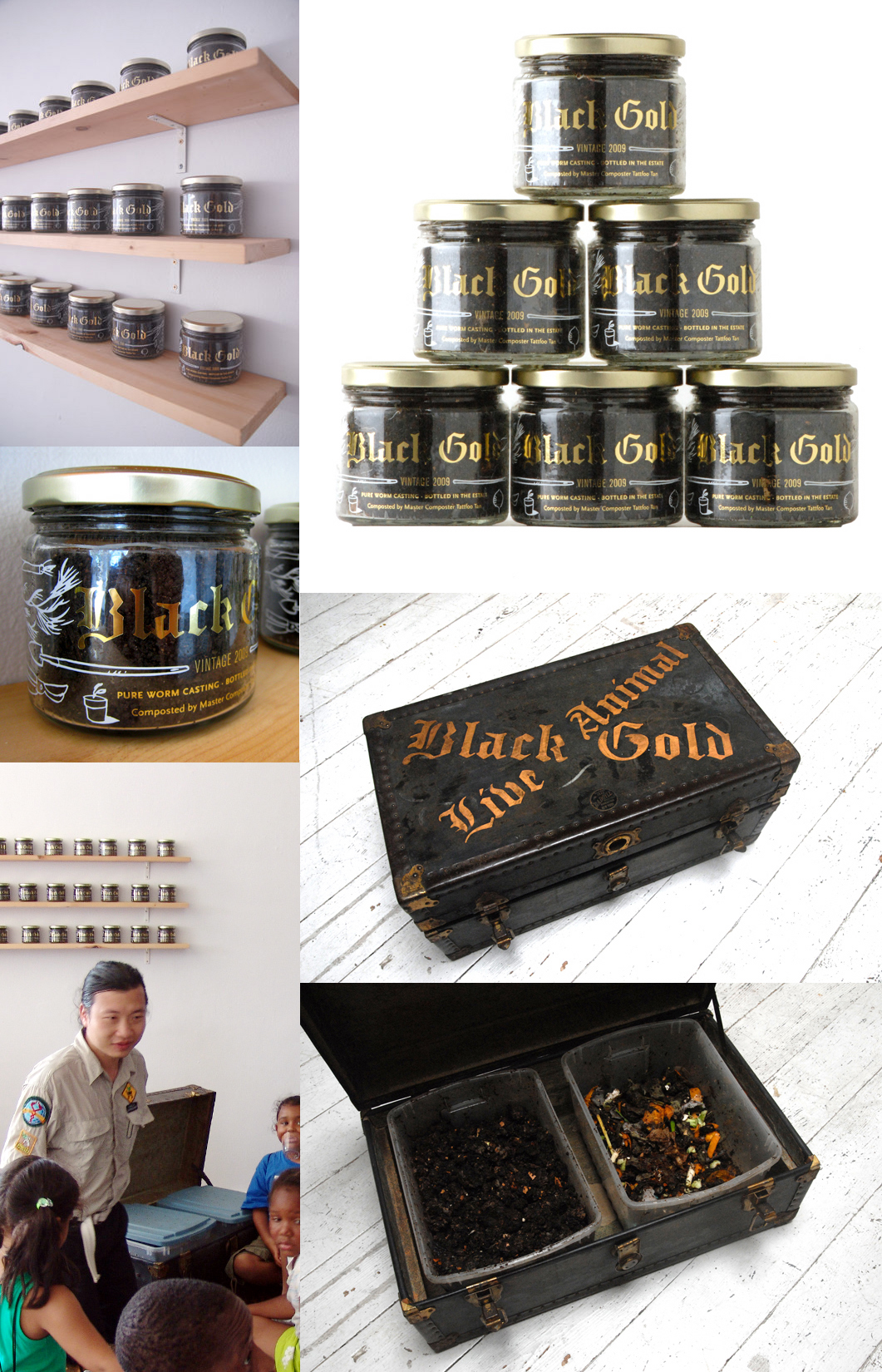 Our friend, Tattfoo Tan—(who participated in the Value Pack show)—has lately been doing ecological art-projects involving compost and worm husbandry. Still dealing with the concept of value, “Black Gold” also is also a comment on packaging and even references the Piero Manzoni “Artist’s Waste” can—(that box vox wrote about: here).

Black Gold took the concept of Piero Manzoni into the 21st century by canning worm casting instead of artist's waste. By purchasing this artwork one is confronted the dilemma of using the compost as a plant fertilizer or not using it and maintain it status as a work of art? Piero also price his work weight based on the current value of gold (around $1.12 a gram in 1960) and coincidentally, compost is called Black Gold by gardener because of its value in improving garden soil.

In an undisclosed location, a secret cellar is in the process of brewing the most creative compost ever. The curing process will take a year long but the final results in pure gold. Black gold to be more precise. The special blended concoction is under the skillful hand and eyes of Master Composter Tattfoo. This limited edition 2009 vintage will be available in early spring 2010. Reserve your bottle now.

Note: Tattfoo appears In the lower right photo with children of the Parkchester After School Program in the Bronx. His boy-scout-style outfit is also part of the project. The “live animal” suitcase is Tattfoo’s portable worm bin.

(A worm-related song clip, after the fold…)

Can of Worms: 2nd song (excerpt) from my “Songs About Packaging” CD. (It just dawned on me, days after I posted this post about Tattfoo’s mobile worm bin & Black Gold in a jar, that I had missed a golden opportunity to plug the worm-related song from my new CD. (Couldn’t have that, now could I?) And it really is sort of related. (This song mentions compost bins and everything.)

Save the Date: “Songs About Packaging” at Freshkills Landfill, Saturday at noon. Those attending this FREE event will be taken on a Magical-Mystery-Tour-style bus ride to the top of Freshkills Landfill where I’ll perform a solo set of packaging-related songs. Transportation to the location will be provided
by the same bus(es) that they use for the regular tours of the Fresh Kills
site. (And everyone who comes gets a free CD.) Click
here to RSVP and reserve a seat.