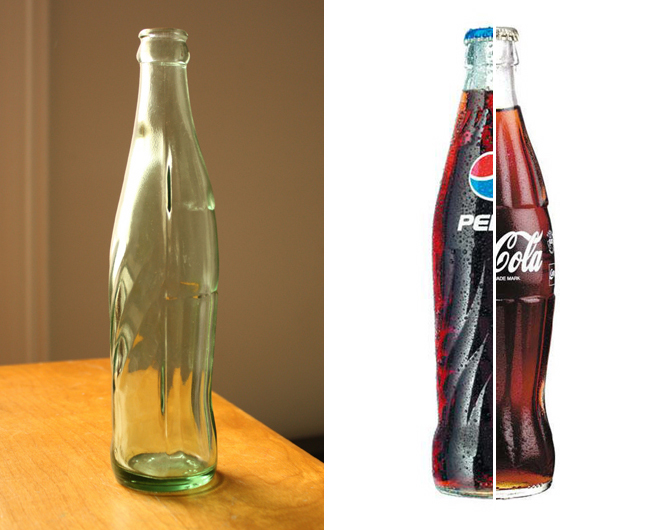 While researching Coke/Pepsi mash-ups in connection with the previous post, I happened to see this photo (above, left) from Andy Beach’s Reference Library.

Yesterday we were contemplating the Coke/Pepsi duality and the implications of mixing them both together—and here now is a suitable container for exactly that sort of cross-branded, hybrid soda. (The composite picture on the right is my clumsy attempt to build an airtight case.)

But what is it really? An artwork? A gag gift? A glass-blower’s project? The posting on Reference Library is cryptic. Ebay is mentioned…

I emailed Andy Beach for further clarification and this is what he said:

“I did get it on eBay. The seller described as a ‘mistake’ or factory defect bottle. He had a bunch of other early Coca-Cola bottles and seemed to be knowledgeable. I bought it because it was just plain cool and weird. My gut tells me it was possibly a salesman’s sample, or a sample to show the bottle manufacturer’s capabilities. There are no marks on it. I’m calling it Coke/Pepsi but there is nothing really that confirms that. The curves are definitely Coke bottle curves or very similar. The other half is similar to Pepsi, but who knows really where this oddball came from.”

Other interpretations of this arcane object? Anyone?