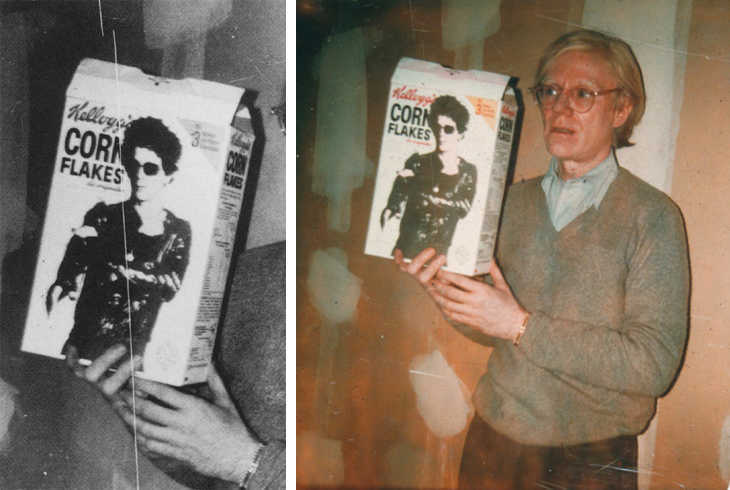 Yesterday’s post was about the famous (but not infamous) people who are allowed to appear on Kellogg’s Corn Flakes boxes. But it was this subversive take on their package, by photographer, Bobby Grossman, that first set me thinking about cereal boxes as a new, heavily censored type of media.

Ostensibly all-American—(Kellogg’s featured an American flag on one recent version of their corn flakes box)—but they’re really a multi-national, hence: a German box from the 1970s. Onto this already somewhat foreign backdrop, Grossman superimposed as unlikely a mainstream cereal box hero as can be imagined: Lou Reed in black leather & black nail polish. 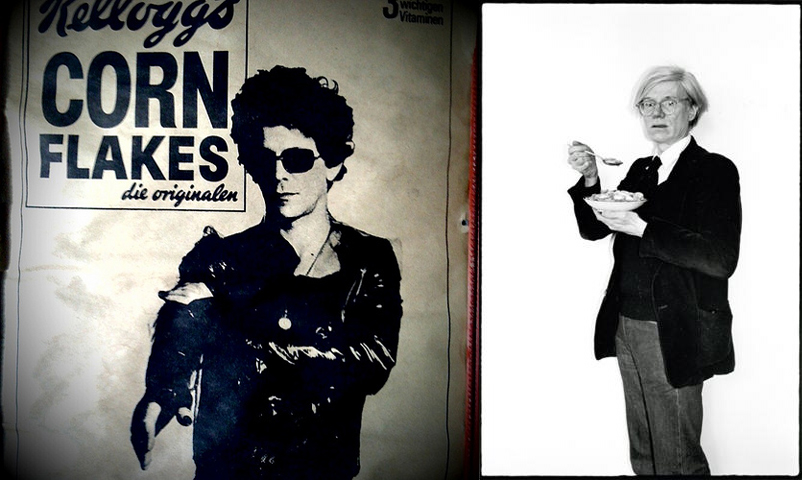 On left: Bobby Grossman’s Corn Flakes box (with appropriated Mick Rock photo) as it appear in the NY Rocker (via: SFview’s Flickr Photostream); on right: photo by Grossman of Warhol eating corn flakes

As a photographer, Grossman then proceeded with a series of unauthorized endorsement shots. Celebrities, but not the sort of celebrities that Kellogg’s generally celebrated. Andy Warhol (of course) but aside from him, mostly musicians…

Do musicians in particular have some special affinity for Kellogg’s Corn Flakes? I’ve read that John Lennon wrote a song based on a particular Kellogg’s television commercial jingle…

“Good Morning Good Morning” is a song composed by (credited to Lennon/McCartney) and performed by The Beatles on the 1967 Sgt. Pepper’s Lonely Hearts Club Band album. Inspiration for the song came to Lennon from a television commercial for Kellogg’s Corn Flakes. The jingle went: “Good morning, good morning, The best to you each morning, Sunshine Breakfast, Kellogg’s Corn Flakes, Crisp and full of fun”.

But the irony of Lennon using corn flakes advertising as a critique of the middle class, pales in comparison to the irony of Lou Reed on a Kellogg’s Corn Flakes box. 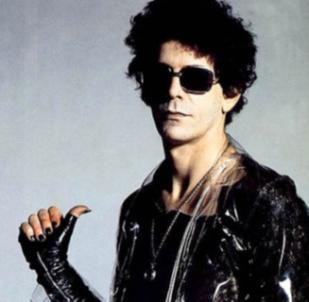 Certainly if Kellogg’s would pull Michael Phelps boxes from their shelves due to pot smoking, they’re not likely to feature the author of a song entitled “Heroin” on their cereal. But the irony runs deeper still…

According to Grossman, his idea for putting Reed’s picture on the box “originated in 1974 while listening to Sally Can’t Dance.”

So considering that Lou Reed’s “Sally Can’t Dance” album includes, “Kill Your Sons” a song about Reed’s electroshock therapy as a teenager in the 1960s…

Reed received electroconvulsive therapy in his teen years to “cure” homosexual behavior; he wrote about the experience in his 1974 song, “Kill Your Sons”. In an interview, Reed said of the experience:

They put the thing down your throat so you don’t swallow your tongue, and they put electrodes on your head. That’s what was recommended in Rockland County to discourage homosexual feelings. The effect is that you lose your memory and become a vegetable. You can’t read a book because you get to page 17 and have to go right back to page one again.

from Wikipedia’s entry on Lou Reed 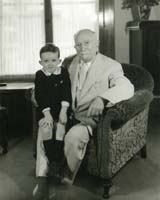 And considering the history of Kellogg’s founder, John Harvey Kellogg…

from Wikipedia’s entry on Male Circumcision

Electricity.—Probably no single agent will accomplish more than this remedy when skillfully applied. It needs to be carefully used, and cannot be trusted in the hands of those not acquainted with the physical properties of the remedy and scientific methods of applying it.

Also chilling: Kellogg was among the early proponents of the American Eugenics movement and helped the found “Race Betterment Foundation” in Battle Creek, Michigan.

Eugenics was practiced in the United States many years before eugenics programs in Nazi Germany (and in fact, U.S. programs provided much of the inspiration for the latter).

from Wikipedia’s entry on Eugenics in the United States

So for all these reasons, I say, Grossman’s Kellogg’s Corn Flakes, die originalen box with the Mick Rock photo of Lou Reed (a Jewish boy from Long Island), strikes me as ultra-ironic.

(Another Die Originalen irony, after the fold…) 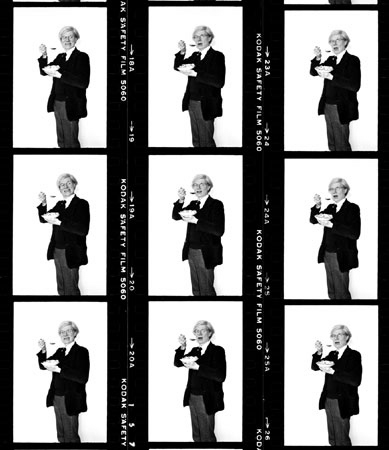 The other ironic thing about “die originalen”—(the original)—is that much of the visual impact of Grossman’s box is due to an appropriated image originally taken by Mick Rock. Indeed the orginality of making art from a Kellogg’s Corn Flakes box, might also be called into question, were it not for the multitude of other meanings this particular box seems to contain.

But Grossman’s connection to Warhol is no secret. His contact sheets of Warhol eating corn flakes are clearly an homage to Warhol’s repetitive silk-screen paintings.

“Andy also thought it might be a good idea if I show my work to Lou Reed since I had a few portraits of Lou in my portfolio. Andy phoned Lou who was at that time finishing up Coney Island Baby and living at the Gramercy Park Hotel. I cabbed over to the hotel and spent a few hours with Lou.”

from an Interview with Bobby Grossman by Noah Becker in 2009 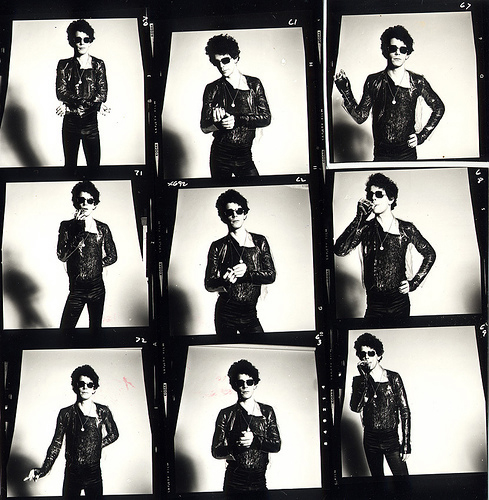