Like Hreinn Friðfinnsson in our previous post, Jose Dávila employed a similar idea in his group of Un Mundo Raro (“Strange World”) sculptures.

Like Friðfinnsson, Dávila took ordinary corrugated cardboard boxes and gave them a surprising interior. But instead of fluorescent color paper, he lined his boxes with gold leaf. And where Friðfinnsson used plain, unsullied shipping cartons, Dávila boxes reveal a previous life of heavy use.

Ostensibly, these sculptures are part of Dávila’s “Judd Series.”

During the 60s, American artist Donald Judd started his celebrated series of wall-mounted sculptures expanding from the ceiling to the floor, reflecting about the use of space. … made of materials that the artist considered to be ‘humble’. [Subscribing] to Judd’s methods,  … Dávila takes this consideration to a new level with the reproduction of the work using materials that turn out to be even more ‘humble’. When using found cardboard boxes — considered to be remnants or waste; the artist makes a comment on Minimalism, resuming Judd’s interest to inquire on the origin and source of materials used to create an artwork.

One can easily see the connection to Judd’s work in Dávila’s wall mounted sculpture, Untitled (2007) on the right. I would argue, however, that his gold-leafed cardboard boxes stand up very well on their own.

The contrast between the beat up cardboard boxes and their golden interiors is striking. How strange for such ‘humble’ boxes to be given a patina of precious metal. On the inside, no less! 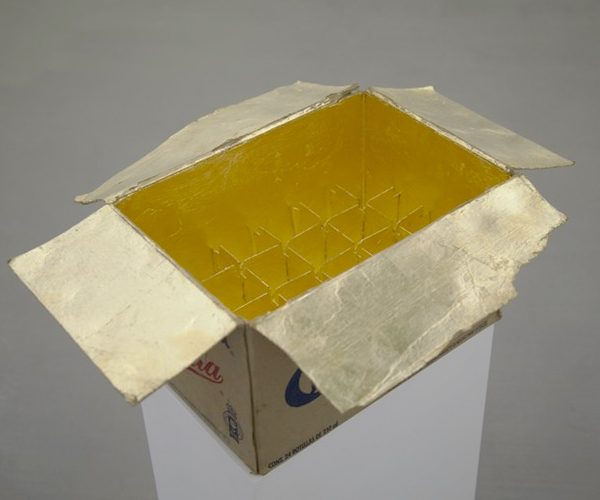 I guess we should officially declare this “Box Interiors Week.”