Following the thread of colored box interiors, today we pivot from contemporary sculpture to commercial packaging.

I think that the three boxes on the right demonstrate the concept nicely.

At first I assumed that a brand named “Agnes Cupcakes” would have been founded by a woman named Agnes. That was naive, perhaps.

I searched, but could turn up no such “Agnes.”

And then, to my surprise, I discovered “Lauras Bakery” — another Danish take-out shop with a very similar logo, whose take-out cartons also had color interiors.

I don’t speak Danish, but I saw at least one website referring to the two brands as sisters. Were Agnes and Laura sisters1 competing in the same industry? Or were they more like sister brands?

We answer these questions and others, after the fold… 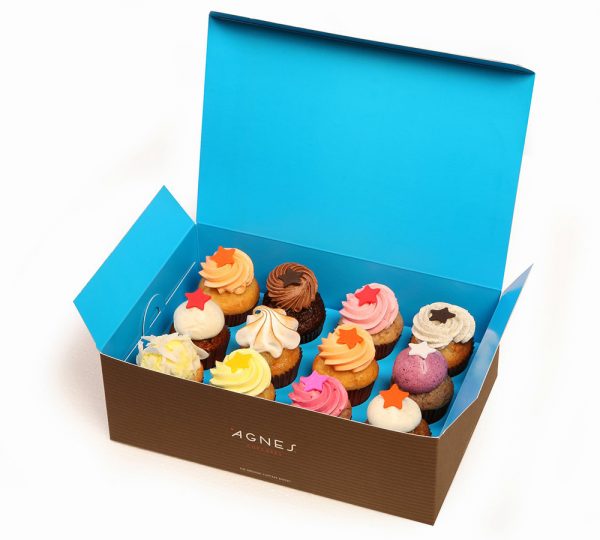 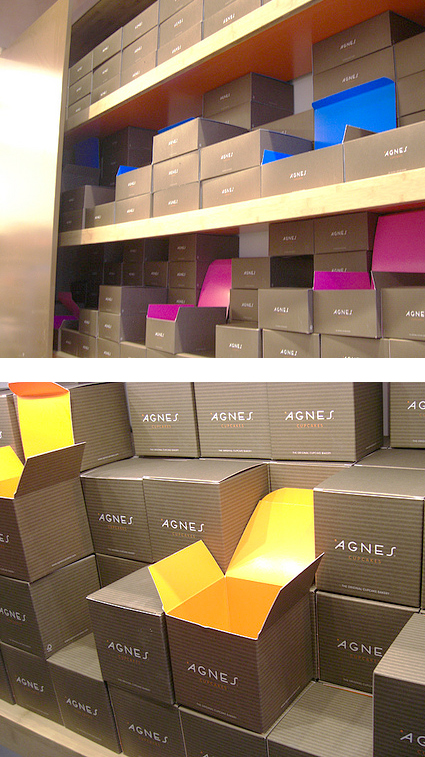 The outsides of the boxes possess a two-toned striped pattern with a matte finish, while the insides have contrasting bright, lacquered solid Pantone colours like orange and magenta. The design is created to be initially subtle and simplistic, with a powerful vibrancy experienced in the act of opening the box, which enhances the feeling of self-indulgence.

Exactly! That’s what I’m talking about — a startling contrast between package exterior and interior. A “surprise” package.

From the video below we learn that the founder of Agnes Cupcakes was not a woman named Agnes, but a man named Kristian Vangsgaard.

(Martin Kubert filmed this episode in 2010 for Venture Cup.)

Who then was Agnes?

According to a 2011 feature in Elle, the Agnes Cupcakes brand was named after a bull-terrier.

Most locals now know that the finest cupcake bakery, Agnes Cupcakes opened in downtown Copenhagen, and many of us, more often than we are willing to admit.

But it was probably very few who knew that the shop is named after Kim Grenaa‘s dog!

Kristian, who owns Agnes Cupcakes, had heard of Agnes and met the dog several times, and when he had to find a name for his shop, Kim Grenaa suggested without blushing that it should be named after Agnes.

Cute story. Cute Dog. But take it with a grain of salt. (We have a competing story for you to consider about the origin of the name…) 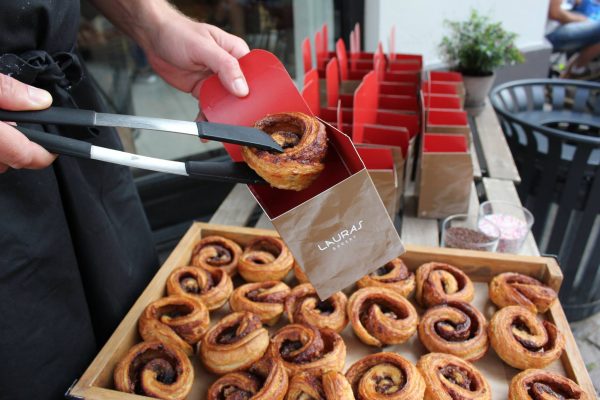 As an English speaker, my natural impulse is to put an apostrophe in “Laura’s.” As it turns out, that would be against the rules of Danish grammar. 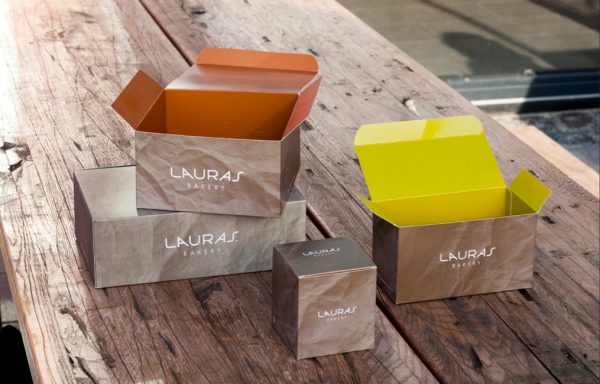 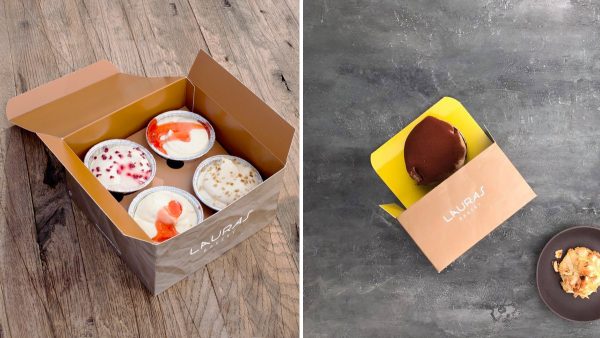 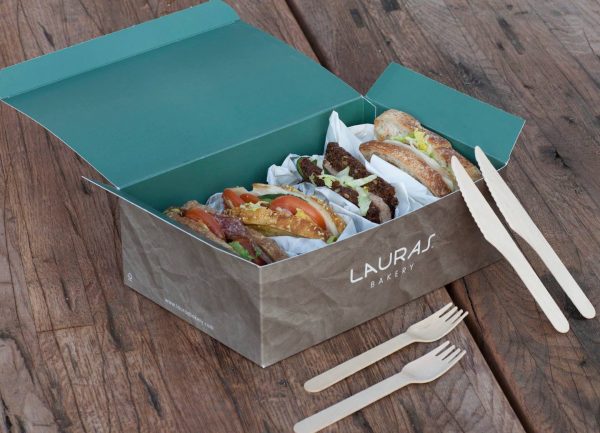 Johannes Torpe Studios, in their description of the “Visual Identity” portion of the project also reveals which “Laura” the brand was actually named after.

The earthy tones derived from baked bread which cover the outside of the packaging are complemented by a selection of contrasting colours on the inside. The brand identity is established within the same design family as Agnes Cupcakes. The name Lauras is inspired by a loved figure from an iconic Danish TV-series called Matador. Laura was the housekeeper of Mr and Mrs Varnæs and created the most delicious dinners for the prominent household.

Some have likened the Danish Matador TV-series to the British Upstairs Downstairs. I looked around for a photo of “Laura” from Matador, and found this one… 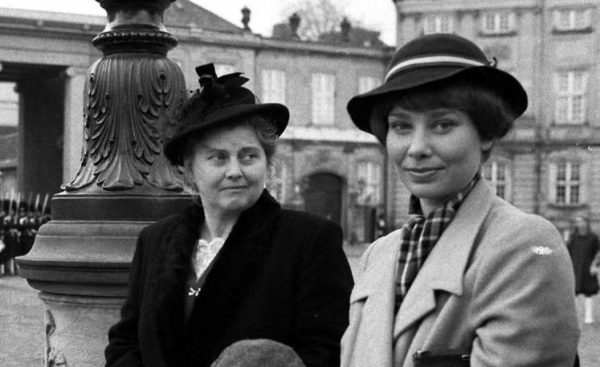 The character’s full name is Laura Larsine Sørensen and she is the one the left, played by Elin Reimer.

But who is that woman on the right? She is a character named Agnes Jensen, a maid on the show played by Kirsten Olesen.

Before we answer those questions, we must digress to acknowledge a 2011 public relations brouhaha.

It is the cash message from employers in the popular bakery Agnes Cupcakes and Laura’s Bakery in Copenhagen for the 30 employees, most of whom are young girls. These include several that are not yet 18 years old.

… Labor market researcher Henning Jørgensen from Aalborg University has seen a copy of the contracts.

“I’ve never seen anything like it. It is the first example I’ve seen of a slave contract in Denmark.”

In the article, Vangsgaard complained about his employees declaring that, “A third or more of the girls are wannabe reality TV stars.”

Widely quoted in the media, Vangsgaard would soon come to regret that remark. Suddenly, all of the press coverage was about the exploitative employment practices of Agnes Cupcakes. (Rather than their minimal boxes with the brightly colored interiors.) 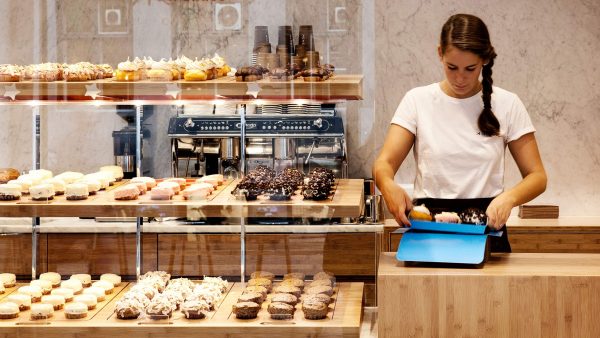 After several demonstrations in Copenhagen against Agnes Cupcakes stores, Vangsgaard capitulated and dropped the company’s punitive non-disclosure clause from its employment contract.

As for his harsh “reality TV stars” comment, he later said “It was a personal frustration that I expressed. But in the future I will probably keep any frustration to myself.”

Still, he had trouble finding investors for expansion and wound up selling Agnes Cupcakes to Morten Strunge.

A 2012 press release about this acquisition states:

We must not escape from the past, but instead show employees, customers and the public that we operate by completely different values ​​than the previous owners. And Agnes Cupcakes comes from the tough maid Agnes on Matador who end up going into business for herself with Mads Skjern. And it is very much the values ​​that will shape the “new” Agnes Cupcakes.

So there you have it: confirmation that Agnes Cupcakes (like Laura’s Bakery) was named after a fictional TV character.

Ultimately, Strunge wound up closing all of the stand-alone Agnes Cupcake shops, although the brand still exists. It was acquired in 2013 by Anne Marie Cramer of Solarex Gruppen.

At the turn of 2017 we changed the name to Agnes. If it makes you think of the famous Agnes Cupcakes, so it is good enough. We baked cakes for them, and in 2013 we acquired Agnes Cupcakes and Agnes Bakery. So it is here with us, you can still get your hands on the beautiful and delicious cakes.

See also: Plain Outside | Colorful Inside

1. In Milan Kundera’s 1988 novel, Immortality, sisters Agnes and Laura are two opposites of women, one quiet and reflective, the other unstable and dramatic. See: Danish translation.