This collection of 17 Harley Davidson Beer Cans formed this over the top air cleaner! I drove my motorcycle to Daytona Beach, Florida for Bike Week to get one can every year. … I cut out the top of the beer cans and pierced the bottom for breathing. Then used threaded rods to bolt the cans to the filter. AND IT SPINS..

I first heard this mocking brand name for Harley Davidson from my college roommate during my freshman year. (He rode a BMW motorcycle.) This would have been around 1974–1975 — a period in which the brand’s reputation was at an all-time low.

In 1969, American Machine and Foundry (AMF) bought the company, streamlined production, and slashed the workforce. This tactic resulted in a labor strike and lower-quality bikes. The bikes were expensive and inferior in performance, handling, and quality to Japanese motorcycles. Sales and quality declined, and the company almost went bankrupt. The “Harley-Davidson” name was mocked as “Hardly Ableson”, “Hardly Driveable,” and “Hogly Ferguson”, and the nickname “Hog” became pejorative.

In the mid eighties, however, the company began licensing its brand name to other products.

[In 1984] Harley started an aggressive licensing program that paid off big time in the years ahead. The first visible product of that effort was Harley-Davidson beer. … In later years, Harley licensed everything from basketball shoes to cigarettes.

It’s rare for beer and cigarettes to be name-brand roommates. Marlboro toyed with the idea of launching a Marlboro Beer brand to go with the their cigarettes, but never fully committed. 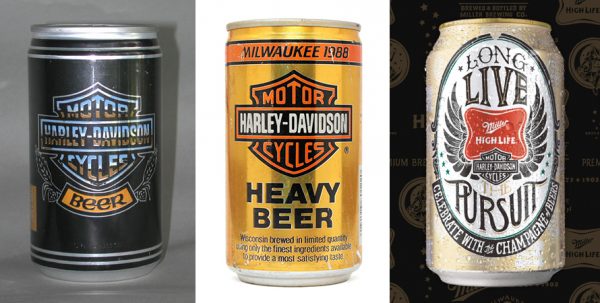 Beer: What if all those cans were Harley cans?

Over the years, the company has licensed the Haley Davidson brand name to various beer brewers, Pabst being the first.

What makes Harley-Davidson beer different this year is that the brew inside is unusually good, which is part of the gag. Clyde Fessler, the Harley marketing executive and Milwaukee-born beer drinker who created it, set out to make the 1987 brew ”an anti-light beer . . . Harley-Davidson Heavy Beer.”

The idea of a Harley beer was born during Bike Week five years ago as Fessler surveyed the beer cans littering ”Harley Heaven” at the chicane turn of the Daytona International Speedway: What if all those cans were Harley cans?

The idea was a natural. Not only do motorcyclists prefer beer to wine and liquor, but Harley-Davidson has a tight budget for advertising and leans heavily on promotions. ”The strongest thing we have is our name. …

One Daytona Beach merchant said she didn’t think many customers bought the beer for taste. ”I don’t know anyone who has drunk it,” said Cindy Driscoll, who runs the Beachside Beer Hut … with her husband Ed. She said many motorcyclists buy standard brands, including Budweiser, Miller Lite and Coors Light, to drink, but buy the Harley beer by the case to take as souvenirs. …

Fessler arranged with the Pabst Brewing Co. to make Harley beer the first two years. In 1986 and again this year, the beer was made by Joseph Huber Brewing Co., of Monroe, Wisc.

Maybe it’s true that Harley Davidson beers are more for collecting than for drinking. If Harley licenses its name to a beer that no one actually wants to drink, however, doesn’t that invite the sort of remarks that the brand has only recently overcome?

Hardly able to drink it

My dad’s favorite shop in town was the Grocery Outlet. It had noname stuff and end of runs and things that fell off the truck, etc. The quality was questionable, but the price was right. One time he found there (for less than 2 dollars a 6er) Harley Davidson brand beer. He bought it and gave it to my uncle (half jokingly) on Thanksgiving. No one drank it there, but my cousin ended up bringing it to school with him in Oregon. At a party he and friend thought they’d give it a try. The friend took a sip and said it was nasty. My cousin poured his in a glass and said it was cloudy with pieces of what looked like rusty metal in it. Even in a frat house, the other 4 were poured down the drain.

Eppie, The Worst Beer Your Ever Had, (from a discussion forum on RealBeer.com)

The video above (via: the Internet Archive) shows a trade film made “apparently, to show at Lorillard’s annual sales presentation. Recreates with humor, using actual salesmen as actors, the rollout of the Harley Davidson cigarette in Indiana.” 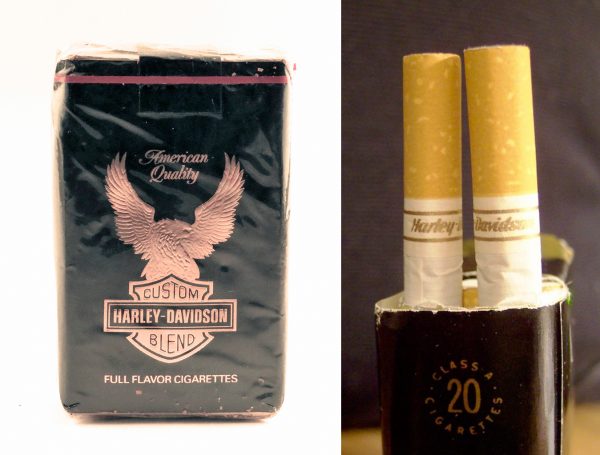 Cigarettes: “if you do smoke, it might as well be Harley’s”

In 1987 Harley extended its brand into the tobacco market:

Can a grinning couple on a Harley-Davidson knock the Marlboro Man off his high horse?

The folks at Lorillard Inc. sure hope so. That’s because Harley-Davidson isn’t just a motorcycle anymore. Now it’s also a cigarette.

Behind the racy new brand is Lorillard, the tobacco company that makes Newport and Kent brands. Now, it hopes to woo younger smokers by naming a cigarette after the high hog of motorcycles. But before spending an estimated $100 million to market it nationally, Lorillard has begun test-marketing Harley’s in Terre Haute, Ind.

“We’re not just going after motorcycle riders,” said Sara R. Ridgway, vice president of public relations at New York-based Lorillard. “We think we can compete with the Marlboro cowboy,” she said. …

Much like Marlboro, Harley is pushing image… “I can’t think of a better symbol for a cigarette,” said Irving Riemer, vice president of the American Cancer Society. “It says, for those people who are risk takers and daredevils, this cigarette is for you”

… “For once, motorcyclists will be seen in a positive light,” said Jeffrey Bleustein, vice president of parts and accessories at Harley-Davidson. “The riders will be clean-cut. It will look a lot like a Kodak ad.”

But not everyone at Harley-Davidson is thrilled with the new image.

In fact, some Harley-Davidson dealers bickered when they heard about it earlier this year at a dealers meeting in Baltimore. “Sure, there were some who thought it might be bad for our image,” said James Paterson, the company’s marketing director. “But we’re not encouraging anyone to smoke. We’re just saying, if you do smoke, it might as well be Harley’s.”

One local dealer, Oliver Shokouh, owner of Harley-Davidson of Glendale, said he has mixed feelings. “When I first saw it,” he said, “I wondered why Harley-Davidson would want its name on a cancer-causing product. But there are a lot of people who are willing to tattoo the Harley-Davidson logo to themselves. I suppose these same enthusiasts will buy a few packs.”

No doubt, there will be some ready-made customers, said E. L. Stillman, executive director of the Huntington Park-based Harley-Davidson Owners Assn. “Some people are so happy to see anything that says Harley-Davidson on it that they’ll smoke it even if it kills them.”

By 1997, however, the company had changed course.

Harley butted out of cigarette market amid fears over image

MILWAUKEE (AP) Harley-Davidson motorcycles may light up the roads, but the company extinguished an attempt to put the bike’s logo on cigarettes for fear of getting burned by anti-tobacco lawsuits. …

The Harley brand, a marketing effort to expand the motorcycle’s name, gained some fans among smokers in the few short years the cigarettes were on the shelves.

Among them was Lorraine Pachi, 67, of Cudahy, a member of the Harley Owners Group, a biker club. Though Harley cigarettes weren’t marketed in Wisconsin, Pachi had a trucker friend pick some up for her now and then from out of state, and she still keeps some packs with a gold and black Harley logo as collector’s items.

“When I smoked them among the other HOG members, it looked cool,” said Pachi, known as “Ma” in the club. “They’d say, ‘Wow, where did you get the Harley cigarettes?’ ”

While Harley butts were a hit with some smokers, the Milwaukee-based motorcycle maker came to regret its foray into the cigarette business. Court documents recently released on the Internet from tobacco lawsuits shed light on how the deal went up in smoke.

Lorillard and Harley wound up suing and countersuing. The feud ended with a settlement that allowed Lorillard to sell cigarettes under the Harley name until September 2001, though the tobacco company decided to drop the brand early and substitute Maverick cigarettes.

Harley butted out of cigarette market amid fears over image, The Journal Times, 1998

« A Helluva Handbasket
Maverick as Marlboro »