A recent post on Sustainable is Good blog described packaging for Method’s natural personal care collection that “… features an easily removable label allowing consumers to have the packaging blend in with their own home environment.”

Packaging was desiged by Method’s in-house design department, and Sustainable is Good goes on to quote Method’s Director of Marketing, Katie Molinari:

“We don’t believe that a logo needs to, or should be, a prominent feature in a home care product,” said Molinari.

“We design our products for the home and treat them as accessories to compliment someone’s personal style. We hope people will recognize Method products by their unique design rather than a logo or label.”

When the label is removed the packaging is only distinguishable as a Method product by an embossed “m” on the side of the bottle.

Reading about this reminded me of something: people used to hide their packaged products away. It wasn’t always the case that consumers would cheerfully leave branded product packaging out in plain sight. That was what pantries and cupboards were for.

There was a time, a product with a whopping-big brand logo was looked down upon. Something unsophisticated and uncouth. Like an artist who signs his name too big. Not upscale. (See Make My Logo Bigger Cream by Agency Fusion.)

(more pictures and more to read after the jump…)

Breakfast counter before & after makeover. Photos from Like Merchant Ships blog

From a discussion on “Old School Table Manners” from the Chow Hound message boards:

The one I remember… was not putting anything out in its package. That is, milk had to be poured into a milk pitcher, juice into a pitcher, butter put on a dish, etc. My husband thinks this is crazy but I still think a table looks much less appealing with a half-gallon of milk, 2-liter of soda or cereal box sitting out on it.
meg944, Oct 16, 2007

…And I totally agree with the poster who talked about no commercial containers on the table. My mother thought that was extremely vulgar. Most sauces and condiments were put into small containers, although ketchup, for some reason, was always left in the kitchen. You could take your plate in and pour (no plastic bottles back then!) the ketchup on, but you couldn’t bring the bottle into the dining room.
KevinB, Apr 17, 2008

This attitude, I believe, began to dissipate in the late fifties and
early sixties. New frozen “TV dinner” packaging made it acceptable to
eat directly from the compartmented tin cooking tray while watching
television.

There was once a time when respectable consumers would no more drink their beer from a beer bottle then they would drink wine from a wine bottle. Ads for beer and soda from the late 1940’s and early 1950’s usually show the advertised beverage in a glass. But increasing, the option of drinking directly from the bottle is offered. In the “Sociable” Pepsi ad (above center), the implication is that drinking from the bottle is acceptable, manly and hip, but that a using a glass is more lady-like. The Coke ad, however, shows a woman who feels comfortable drinking her soda directly from the bottle. (Perhaps because she’s alone and unobserved.)

Personally, I am a product of my times and have no compunction at all about drinking from a bottle or a can. It might also be an American thing. My Belgian friends always offer me a glass of beer and seem a bit crestfallen if—(disregarding the rules of beer connoisseurship)—I drink it directly from the bottle. 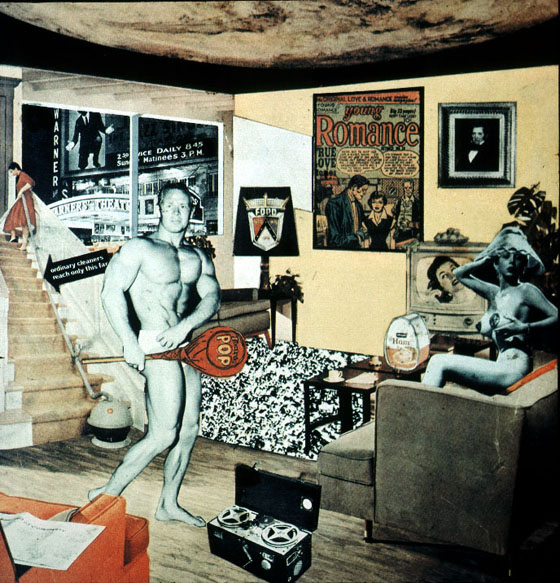 In 1956 Richard Hamilton created his seminal collage (above) with the lengthy, ad-speak title: Just What Is It that Makes Today’s Homes So Different, So Appealing? Showing an interior with cut out elements from magazine articles and advertising, including pictures of two packages. One, an oversized Tootsie-roll Pop (which Pop Art may or may not have been named after)—the other, a tin of Armour brand ham (a streamlined packaging shape designed by Raymond Loewy in 1944).

When Pop art emerged full force in the early sixties, it was like gay liberation for packaging. Out of the cupboards and into the kitchen. (…and the bathroom and the dining room and the bedroom and the living room, etc.) Brillo boxes and Campbell’s Soup cans decorated the apartments of wealthy collectors. Ironic, to be sure. But if product packaging was OK for the museums, what was there to be ashamed of in having it around the house?

Still, some manufacturers understood that for a package to continue advertising after it was purchased and brought into the home, was a little like preaching to the converted. There is certainly precedent for un-branded (or at least softly-branded) decorator packaging. Kleenex decorator boxes for tissue are a good example. Remove the top panel and most of the branding is removed (except for a smaller logo at the bottom.) 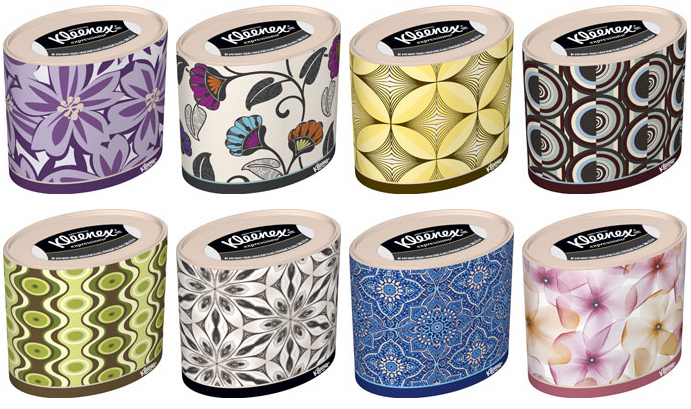 Another example of an early attempt to provide a less obviously commercial package for home use was the salad dressing cruet. 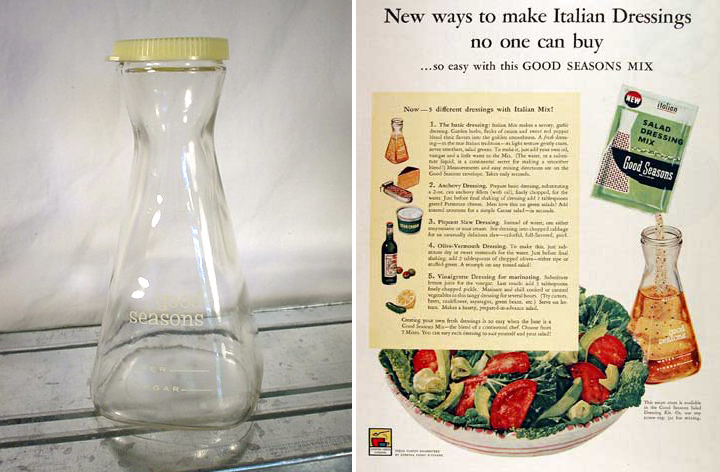 There was a related un-branding trend in the 1970’s and 80’s with generic brands packaging. Although the point of the generics was not to spare consumers unwanted advertising or visual pollution but to offer a lower-priced alternative to name brand products.

Logowear
It was some time in the 1980’s that I first began to notice a shift in the way product logos were being used. (We were entering the era of designer labels.)

What was once a functional emblem to identify the brand, suddenly became the whole point of the exercise. Huge logos (or repeat patterns of the logo) were now the most prominent feature of the product. As a trend, this was pretty emblematic of the times. On the one hand, ironic in a Warholesque way. On the other hand, calculating and opportunistic in a greed-is-good sort of way. For consumers of luxury, designer-brand products, the status aspect wasn’t a bit ironic. More like: if you’ve got it, flaunt it… (And if you don’t… then fake it.)

What was supposed to be aspirational branding turned out to be a bonanza for counterfeiters. Why wait and save up for status-enhancing products when the knock-offs can be had today?

And so it has come to pass that for several decades now, we have accepted and embraced “logowear” over more generic alternatives. It’s been this way for so long that today’s consumer sees nothing odd or counter-intuitive about paying for the privilege of wearing a manufacturer’s logo.

For some companies this was the pinnacle of branding success—to have created a brand that people identify with so strongly, that they want to wear it as a statement. (See: brand community)

Recently, however, there are signs that the pendulum may be swinging the other way. That even consumers, who may admire and identify with a company’s products, might prefer a bit less aggressive marketing in the privacy of their own homes. Sensory overload? The need for a calm, ad-free zone? (See de-branded Home)

During his years at Gucci, Mr. Ford used the GG logo as a launch pad for creating cachet, updating it and putting it on everything from shoes to handbags to dog beds.

Nowadays designers of every stripe high and low plaster logos on a broad array of merchandise, so that logos no longer carry the connoisseurship and cachet they once did. “I never thought logos were the way to sell products,” he says. Too often they are showy labels that don’t represent merchandise that is high quality. A logo is “only as valuable as the brand it represents,” Mr. Ford says. “People now are maybe more suspicious of that hollow product behind the logo.”

Still, he understands why many consumers are fixated on wearing logos: It demonstrates they belong to an elite group. “It’s just part of human nature,” he says.

And according to Paul Magill, former Vice President, Marketing, for IBM Global Services

Today, we face a crisis of branding. Not only is the game up on authenticity, but we have a new social context to contend with. The “No Logo” movement, and related anti-globalization, anti-Americanization movements constitute a major crisis for marketers today. The “Second Superpower” idea has emerged, in which America as the first superpower faces the challenge not of another country, but of a vast, international social movement whose goals are varied but center around resisting the cultural dominance of the US. The most valued brands by traditional measures (McDonald’s, Nike, Starbucks, Coke, etc.) are rapidly becoming the most hated brands.Traditional marketing theory has essentially nothing to say about this: a brand which meets the needs of its customers and which consistently delivers on its brand promise should do well. But the problem with Nike and Starbucks and the others is not breaking their brand promise with their direct customers. The problem is about the fit of their overall brand paradigm with the overall social context.

Five years later, “the most hated brands” seem to have weathered any pending cultural revolution, but there are still plenty of signs that Magill was right. At this point in time—(culturally speaking)—it’s not cool to love big companies. Even though an artist like Takashi Murakumi may seem to zealously embrace commercial branding (by including a Louis Vuitton boutique in the heart of his retrospective show) this approach seems out of step with his times. More like something Warhol might have done in the 1970’s. 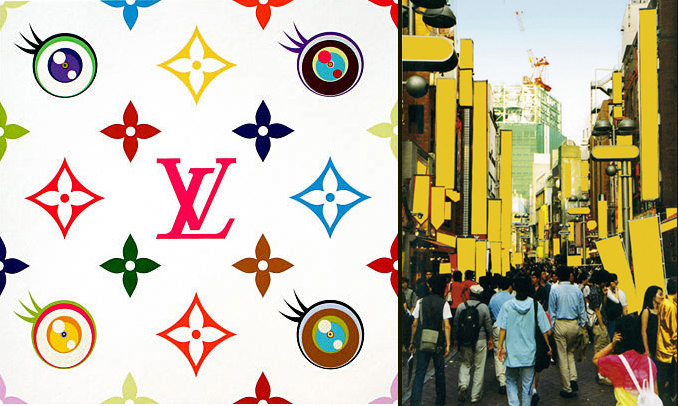 Two opposing artistic approaches to branding: On the left, a painting by Takashi Murakami from his current show (which includes a fully operational Louis Vuitton boutique); on the right, “Delete!,” a proposal by Christoph Steinbrener & Rainer Dempf for a temporary masking of all signs in Ginza.

If the trend is for consumers to turn away from transnational corporations, what products would they then invite into their homes? Do-it-yourself bath products and locally-grown food? Or will big companies repackage their products in order to appear sufficiently DIY and home-grown?

The idea of “cutting through the clutter” and “category disruption” is all well and good from the point of view of companies competing for attention. But there is some evidence that a cultural shift is taking place in which consumers are increasing attracted to the strong silent type.