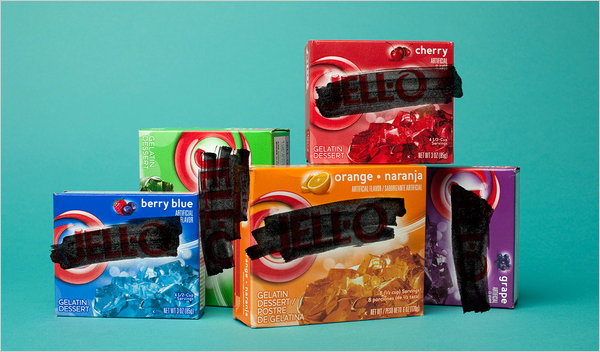 The concept isn’t new to me. I’ve just been calling it by its generic name: “genericized trademark.”

It’s a dilemma for manufacturers. Good to have your product be so successful that its trade name is the first word that comes to mind. Bad when the court decides that your product’s name has become a colloquial term and can now be used to describe all products in your category—including your competitors!

When this bad thing happens they have a word for that, as well: genericide. In his column on Sunday, about homemade gelatin desserts, Pete Wells seemed to be bending over backwards to avoid committing genericide. (Hence: the crossed out Jello-O logos in the beautiful photo-illustration, above.)

We do keep at least one kind of powder in the cabinets: Knox brand gelatin. This permits us to make what I would call Jell-O, if Kraft Foods would let me get away with it… If I were English, I could call the wiggly desserts I make with this powder “jelly,” but in my country, jelly goes on toast. I am stuck with calling them “gelatin,” which sounds as appetizing as a Band-Aid.

Which is a funny thing to say, since Band-Aid is, apparently, an appealing enough sounding name that—(like Jell-O)—it has had to shore up its defenses to avoid becoming a colloquial term. Cited on Wikipedia as an example of how to avoid genericide, Band-Aid revised their jingle to emphasize the brand specificity of their name. (Changing the lyrics from “I am stuck on Band-Aids, ’cause Band-Aid’s stuck on me” to “I am stuck on Band-Aid brand, ’cause Band-Aid’s stuck on me.”)

Meanwhile, I would agree with Wells, that “gelatin” sounds as appealing as an adhesive bandage.