From Gasoline Alley Antiques: a lunch box that looks like a loaf of sliced bread. (Available on their website for $400)

Or it would be if this were a bread package. The idea being: the outside of the package serves as a precise diagram of the contents, almost as if the package were transparent. Except that—(just as in the food photography for some unphotogenic frozen entrée)—there’s an opportunity to show a more idealized version of the contents than would be seen through an ordinary transparent package.

And because trompe l’oeil packaging is so fun, the consumer won’t mind being fooled.

(Bread Loaf Lunch Box also comes with a package-related thermos, after the fold…) 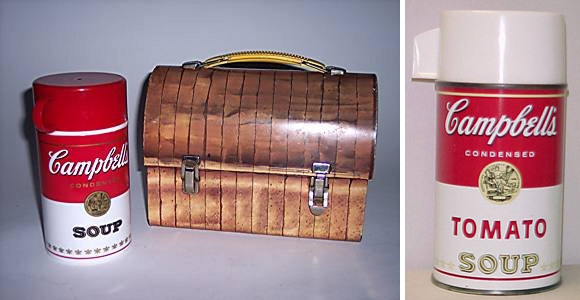 Lunch box & Thermos, made in 1968 by Aladdin Industries. (Left hand photo with the red-cup Thermos is via Worthpoint.)

2. Thermos® is one of those “brandnomers” we were just talking about.
Originally registered trademark of , it slipped into common usage and
lost its trademark protection in the U.S.