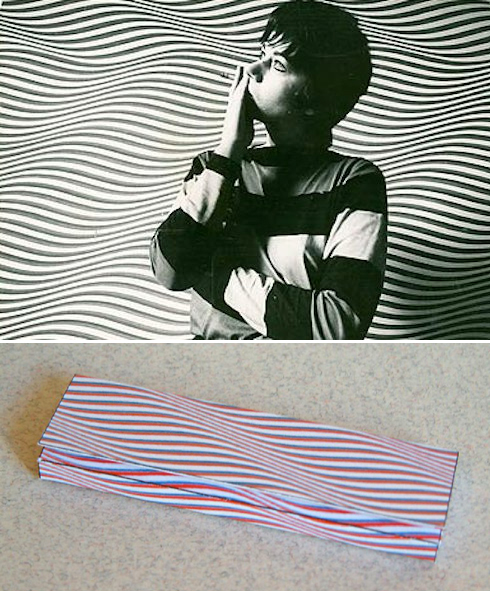 Top: a portion of a 1964 photo by David Newell Smith of Riley posing with a cigarette in front of one of her paintings in 1964; lower photo: a handmade rolling papers pack from OddSock’s Flickr Photostream—(the pattern is a reproduction of Riley’s, “Cataract”)

One of the packages we featured on Monday in “The Bridget Riley Look” was a pack of cigarettes, but it was in David Newell Smith’s photo of Bridget Riley (above right) that I first noticed that she, herself, was a smoker.

We’ve looked at photos of smoking celebrities before—(see: Arents Tobacco Collection)—but it’s funny how the cigarette in this photo nearly disappears into the lines of the painting behind her. With all the other associations one can draw from those wavy lines, here’s one more: smoking. Maybe she’s quit smoking since then. I don’t know.

“I once had dinner with Bridget Riley. I can’t remember much about the occasion—it was at the house of a prominent broadcaster, one firmly rooted in the arts establishment— except that Riley herself was like-ably dynamic and feisty, keen on hand-rolled cigarettes, and professed herself—as she often has in print—to be an anarchist.”

“Read between the lines:
Are Bridget Riley’s paintings really fine art?”
Will Self, The Independent, November 29, 2008

Of course, “rolling papers,” ostensibly sold for tobacco cigarettes, have a well-known “off-label” use. Similarly, psychedelic sixties culture found a use for Riley’s patterned paintings that she had not intended:

… their dizzying effect and their evocation of movement, coupled with their ultra-modern monochromatic coolness, her black and white paintings somehow articulated a kind of Space-Age psychedelia—concerns that could not, then or now, have been further from Bridget Riley’s thinking, character or approach to art-making. Twenty-five years later…  she said to me that, as regards the attempts to relate her art to the psychedelic experience: “I was surprised to be seen as a sort of representative of an aspect of the psychedelic culture. It was a collision between my intentions as an artist and the cultural context in which I found myself. I remember being told as though it was some sort of compliment that it was the greatest kick to go down and smoke in front of my painting…”

(More about Bridget Riley and smoking, after the fold…) 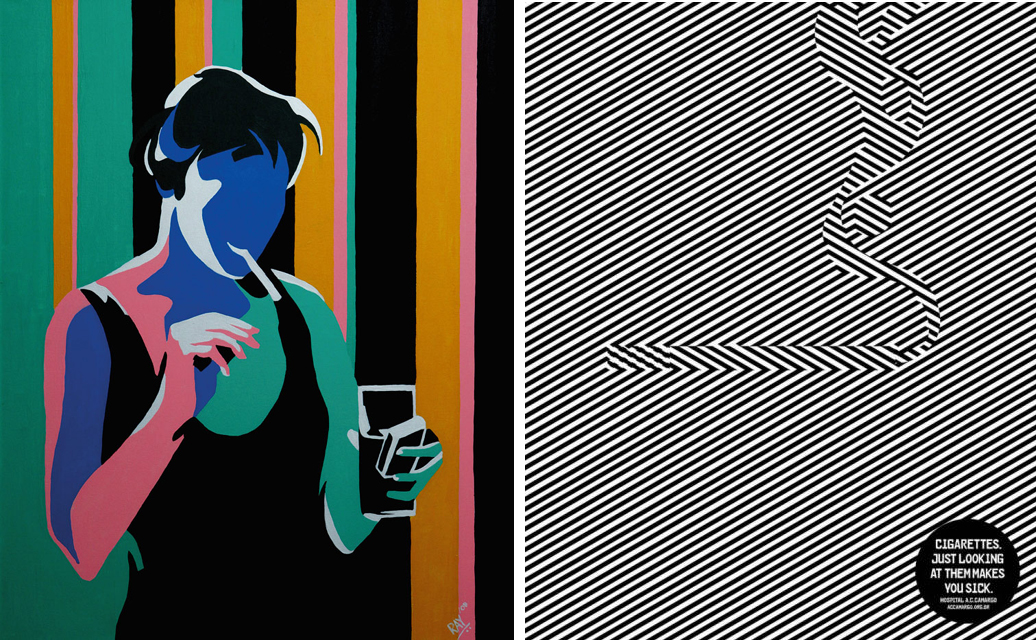 That Riley smoked, has not gone completely unnoticed. The painting on the left, entitled “Smoking Bridget” is by Devajyoti Ray, who shows her with what appears to be a commercial pack of cigarettes, rather than hand-rolled paraphernalia. (via: Artostyle)

On the right is an op-art-style anti-smoking poster that uses that same old joke about optical illusions making one feel sick. (via: Op-Art.co.uk)