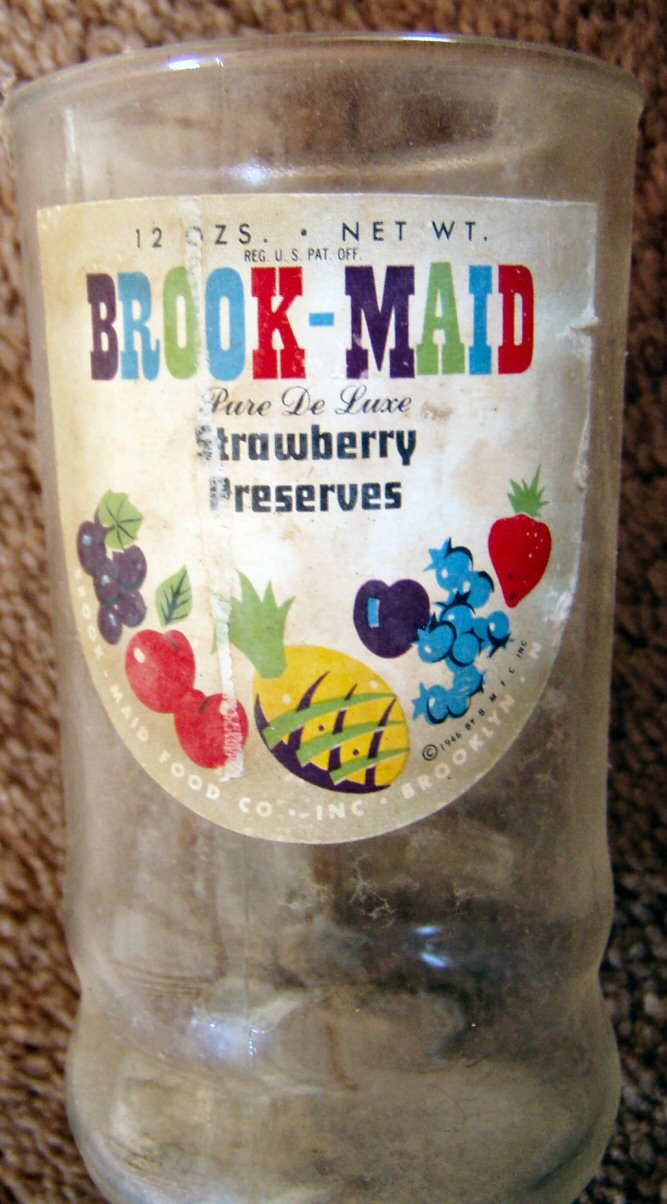 Based in Brooklyn, “Brook Maid Food Co.” used to make jelly and preserves. Another nice example of a multicolor brand logotype —(jar photo from Mankatt’s Flickr Photostream)— and yet this particular brand was cited more than once for misbranding.

Two views as to their product quality:

Brook-Maid has always been a firm believer in the selling power of quality products in attractive packages. Twice they have rated The Glass Packer’s front cover.

But from the Food and Drug administration:

These cases involved alleged preserves that were deficient in fruit, that contained an excess of sugar, and most of which also contained added pectin.

On or about March 5 and March 18, 1936, the United States attorney for the District of Connecticut, acting upon reports by the Secretary of Agriculture, filed in the district court libels praying seizure and condemnation of 7% cases of alleged preserves at Hartford, Conn., and 14 cases of alleged preserves at New Haven, Conn., and 140 jars of alleged preserves at Bridgeport, Conn., charging that the articles had been shipped in interstate commerce on or about October 8, 1934; August 20, September 13, and October 3, 1935; and January 15 and January 17, 1936, by Brook Maid Food Co. Inc., from Brooklyn. N. Y., and that they were adulterated and misbranded in violation of the Food and Drugs Act. The articles were variously labeled in part: “Brook-Maid Brand * * * Pure Preserves Strawberry… Brook-Maid Food Co., Brooklyn, N. Y.” …

The articles were alleged to be adulterated in that mixtures of fruit and sugar, most of which also contained added pectin, containing less fruit and more sugar than preserves should contain had been substituted for preserves; in that sugar and in most of the products also pectin had been mixed and packed with the articles so as to reduce or lower their quality; and In that the articles had been mixed in a manner whereby inferiority was concealed.

The articles were alleged to be misbranded in that the statements on the labels … “Pure Preserves Strawberry” … were false and misleading and tended to deceive and mislead the purchaser when applied to products resembling preserves, but which contained less fruit than preserves should contain.