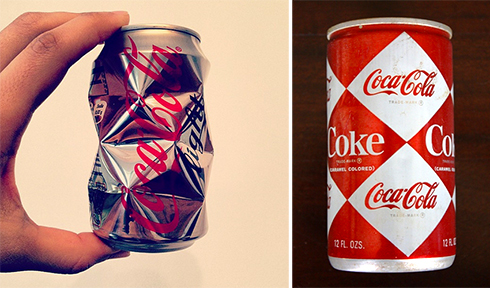 Jorge Ubeira has been bending soda cans into a geometric pattern that reminds me quite a bit of the 1966–1967 harlequin patterned coke cans. Don’t know if that’s his intention, but he’s been exploring the pattern in a big way, mostly with Coca-Cola Light cans. (See his Flickr & Instagram sites)

Also reminds me of Dzmitry Samal’s 2009 faceted soda can and how sometimes the physical form of a package can make a deeper impression than its surface decoration. Not saying that structural packaging always trumps graphic design, but there’s something more tangible and trustworthy about structural package design as opposed to surface package design. (See: Printed = Bad. Embossed = Good.)

(More of Ubeira’s can bending, after the fold…)