For part 2 of our “Canned Museum Beer” series, we bring you Virgil Marti‘s 1997 “Beer Can Library” wallpaper installation. 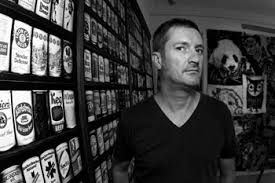 This is called Beer Can Library. It’s a four color screen print reproduction of my beer can collection from when I was a teenager.

… I started with a formal idea of the tradition of trompe l’oeil wallpapers where oftentimes it would be a library. Wallpaper that would look like shelves and books. You put it up and it makes it look like you have a great big library. But I was taking my collection of beer cans and applying that to that idea.

I liked that this piece could function as a sort of removed self portrait in a way. It wasn’t really my beer can collection. But it could have actually been any boy of my era’s beer can collection. There was something sort of personal and generic about it at the same time which is really interesting to me.

This is the entire print. It goes on for 33 feet before it starts over. It’s all alphabetized and it goes from domestic cans to European cans to oversized cans, and then it repeats again — and they are actual sized…

In addition to the intentions that Marti stipulated to above, he is also placing a more disreputable type of collection into a museum context. What makes beer can collections so disreputable?

[More images and further thoughts on Marti’s “Beer Can Library,” after the fold…]

When Willem de Kooning said of art dealer, Leo Castelli that “you could give that son-of-a-bitch two beer cans and he could sell them,” he used beer cans as a hyperbolic metaphor. Beer cans = the worst art ever.

This, of course, gave Jasper Johns his idea for Painted Bronze (Ale Cans) — a sculpture of “a couple of beer cans,” now in the collection of the Museum Ludwig in Cologne.

If de Kooning thought couple of beer cans were the opposite of art, what might he think of Marti’s extensive Beer Can Library?

Usually, the beer collections that we mention are not exhibited in museums. (Although, there is a Beer Can Museum.)

”Beer Can Library” in the front gallery is another wallpaper-style installation, this one with images of hundreds of beer cans meticulously lined up on shelves. The cans really exist. The artist and his father collected them over years as a shared project, a hard-to-find bond of mutual interest, and they are still stored in the basement of his parents’ home.

In one way, the beer-can wallpaper appears to be a droll comment on taste and tackiness. But he collected those cans as an adolescent in a bonding exercise with his aeronautical-engineer father. So the image might really be a celebration of the objects, however humble, that connect us and give us pleasure.Eils Lotozo, Art or design? Blurring the line Blurring boundaries between art, design
Philadelphia Inquirer

The thing about a huge collection of beer cans, that gives one pause is that it can be read a tangible record of (the collector’s) alcoholic consumption.

Teenagers as beer can collectors 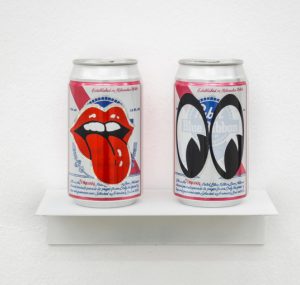 What did Marti mean when he stated (in the first quote at the top of this post) that the beer can collection was not really his? According to the quotes above, he and his father collecting the cans together.

I think what he meant was that he did not personally drink all those beers. (Because that would have been, you know, disreputable.) And yet he goes on to say that this “could have actually been any boy of my era’s beer can collection.”

The early work of Tim Gardner gives us a similar glimpse into the less curatorial basis for adolescent beer can collecting. 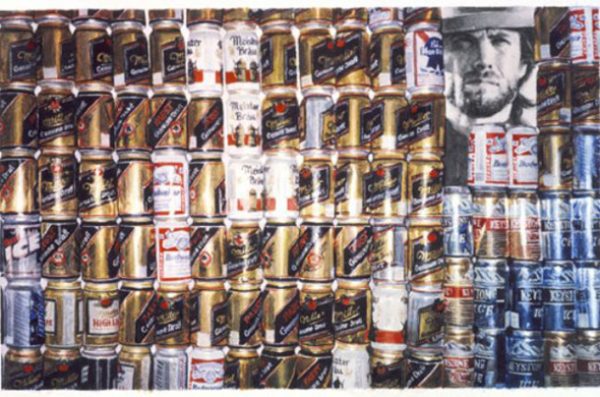 Which is not to suggest that all beer can collections are proof of alcoholism or teenage binge drinking. Plenty of non-alcoholic guys collect beer cans simply because they like the graphics on the cans.

The cans represent the vast collection that Marti and his father collected years ago when Marti was growing up near St. Louis, Missouri. “I try to find beauty in those things I’ve been told aren’t beautiful anymore,” Mr. Marti explained to the Philadelphia City Paper. He also admitted that he wanted to make an ironic comment on “yuppies who thought microbrews were the new wine.”

Duane Swierczynski, The Big Book o’ Beer:
Everything You Ever Wanted to Know About the Greatest Beverage on Earth 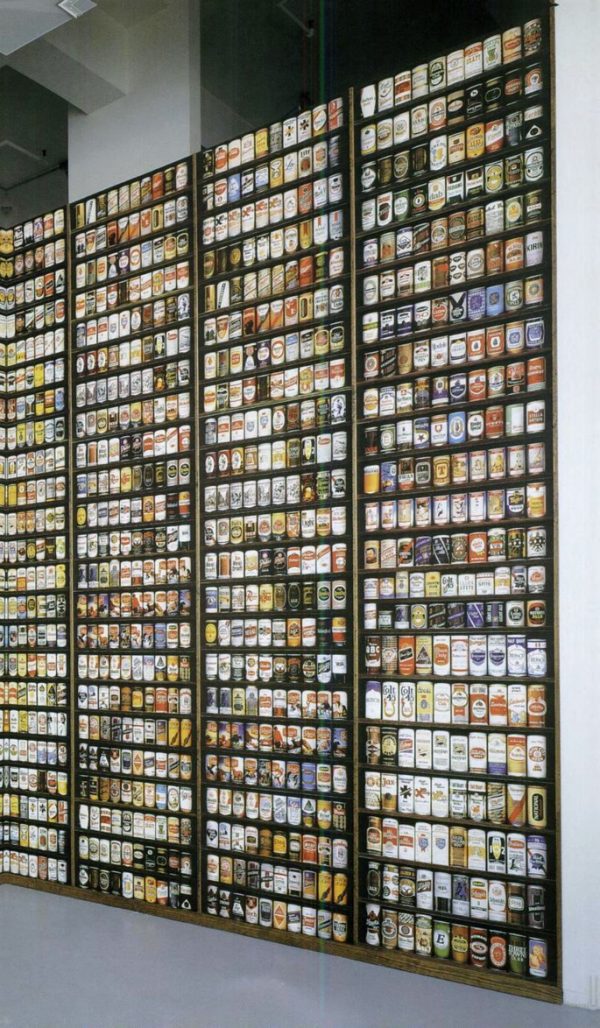 But even the soberest and most aesthetically astute collector may start to seem like a hoarder if his collection grows too large.

I was consciously thinking that I have this big collection of beer cans that some day I will have to store. If I made an image of them it would be a way to condense the collection and make it smaller. Then I could give prints away to people, but I would still have it for myself.

Virgil Marti, in a 2011 interview with Lauren Nye