From the Smithsonian’s National Museum of American History:

This unusual metal object, shaped like a small pitcher with a lid, becomes even more curious when the lid is raised and a sharp can opener is revealed in the lid’s underside. Called the “Tapster,” this device was made by Revere Copper and Brass, Inc., in Rome, New York, probably around 1934, after the repeal of Prohibition. Although it was never used extensively, the Tapster did offer consumers a somewhat refined way of serving canned beer: a can of beer is placed inside the device and, when the lid is closed, the opener pierces the can. The beer can then be poured out of the spout.

We’ve seen this type of device before: a package-related consumer product. On the one hand Revere’s Tapster was a can opener, a necessary accessory in the days of flat-top beer cans. If packaging were perfect, of course, nobody would invent products like this.

But it also had another package-related function: to conceal a beer can within a pitcher. What makes a can-concealing pitcher more refined? The answer depends on how 1930s consumers felt about beer cans on their tables. (See: Branding in your home)

Despite what the Smithsonian implies (“never used extensively“), Revere found plenty of customers for the Tapster in the late 1930s. It would be much more scarce on eBay, if it hadn’t sold well to begin with.

The museum also dates the Tapster at “around 1934, after the repeal of Prohibition.”

How do we know this for sure?

There’s a stamped trademark on the bottom of most Tapster opener/servers that says, “Patents Pending.”

I searched for any beer-related patents assigned to Revere Copper & Brass. That didn’t reveal anything.

I did, however, find two 1930s patents for devices that looked very similar.

One was Victor N. Hamilton’s patent for a “can perforating and contents pouring lid.” His patent makes claims for opening and pouring cans of condensed milk and syrup. No mention of beer.

The other was Nathan H. Buschman’s patent for a “serving device for cans.” Here, there are claims for opening and pouring beer cans. But still no mention of Revere Copper & Brass…

Was this one of Revere’s “patents pending?”

I searched online for some connection between Nathan H. Buschman and Revere. He lived in New York City. Revere had headquarters in Rome, NY.  I found no evidence that he ever worked for Revere.

But then I found this trademark that Buschman had registered in 1936:

This is the same Tapster logo that appears on Revere’s packaging. What does it prove? For one thing, it proves that Nathan A. Buschman owned the Tapster trademark for his “BASE METAL CAN HOLDING PITCHERS.” And where it says “The trade-mark has been used and applied to said goods in applicant’s business since January 21, 1936” — that’s our proof that nobody made or sold them until 1936.

Not surprisingly, that is also when the new invention received the most advertising and press.

Revere Copper and Brass. Inc., New York, has appointed J. M. Mathes, Inc.. of that city, to direct the advertising of The Tapster, a new opener and server for beer in cans. Class magazines and a New York Sunday paper will be used, as well as the trade press.

Tapster the official, the one-and-only server for the new and better beer-in-cans, is the very newest thing in up-to-the-minute shops. … Tapster is just as smart as it looks, and so easy and quick to use. Just slip in a can of beer, close the cover, and pour. Tapster’s beauty goes with your best table service, and Tapster’s ruggedness makes it a good companion anywhere. Look for Tapster on your shopping tour today . . . It’s so new your dealer may not have it yet … In that case, just send the coupon. 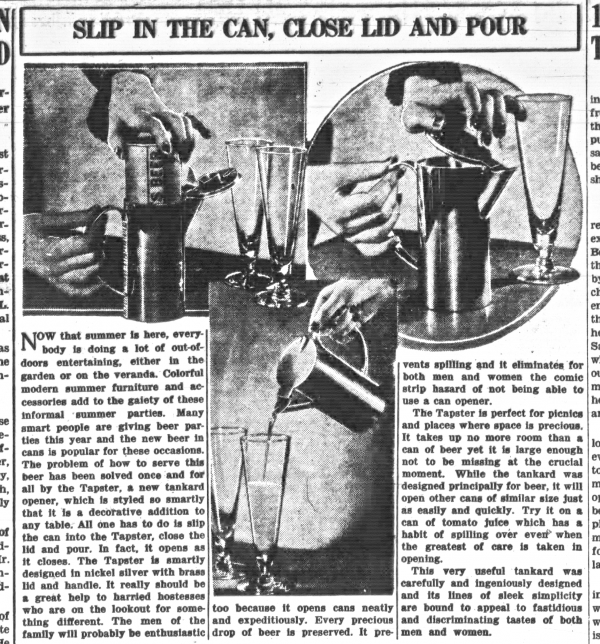 Tapster, an opener and server for beer in cans, is introduced by Revere Copper & Brass, Inc. Shaped like a tankard, the Tapster is of nickel silver, with stainless steel blade attached to the lid. Closing the lid punctures the can, and the beer is ready for pouring.

… the “Tapster,” which just fits a can of beer, opens it with a blade attached to the cover and provides a perfect way for pouring (Revere Copper & Brass, Inc.)

Tapster, the ingenious beer pitcher that also serves as a can-opener, product of Revere Copper & Brass, has a swell paradox for a slogan: “It opens as it shuts.”

Beer cans, of course, have evolved into something that probably would not fit or work well with a Tapster. Beer cans now come with their own built-in openers and fewer people feel the need, perhaps, to conceal their beer cans.

Still, since the Tapster is collectable breweriana, a few eBay sellers have thoughtfully paired their Tapsters with flat-top beer cans. (above right) 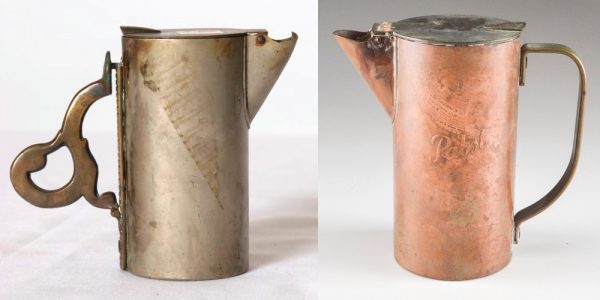 Revere made Tapsters with a variety of handle styles and appears to have also offered a logo imprinting option (via: EBETH)

One or two eBay sellers have offered the Tapster for sale with its original packaging. (photos on right)

According to one ebay seller, Tapsters were actually put to use in canning breweries…

We will be returning to this subject (of beer manufacturers allowing their employees to drink on the job) in a future post.

(As for Canned Museum Beer Week, this post concludes that series.)