Saville worked with Tate Design Studio on the packaging design, which is silver with brightly coloured geometric artwork.

The museum beer packaging is an extension of Saville’s color-coded brand identity for Tate Modern’s “Switch House” gallery in London. The beer take its name from the building—a former power station and was brewed by Fourpure Brewing.

I hadn’t realized that art museums were now selling beer as a consumable sort of brand collateral. Tate Modern, however, appears to having been doing this a while now.

The Tate’s exclusive range of beer will be labelled with art work inspired by the latest exhibitions held at the London galleries.

For the Switch house beer can, the designers used Saville’s abstracted diagram of the building on the front of the can, and then tucked the museum’s brand logotype tastefully out of sight at the back of the can.

We’ve seen this kind of “designer pack” before: a familiar commercial container, incongruously devoid of any (obvious) branding.

There was a time when consumers didn’t much like commercial packaging on their dinner tables. In recent years, of course, we’ve been conditioned to accept it more and more.

Yet, for those still wishing to control their intake of branding messages, a package with “art” as a label may seem preferable to one with a prominent brand logo. Naturally, an art museum is uniquely well-positioned to give its packaged products this aura of fine arts.

Museum gift shops have long been an outlet for housewares with artistic aspirations. But museum beer was new to me. Will logo-suppressed “fast-moving-consumer-goods” be the wave of the future for museums and non-profits?

More about “museum beer” after the fold… 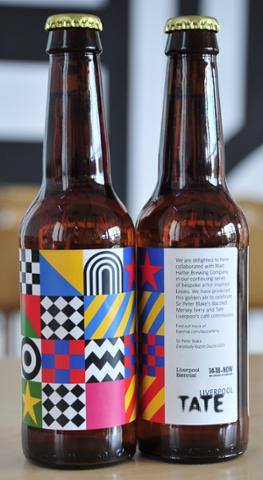 Earlier craft beers by Tate Modern have been bottled beers with printed labels.

The museum “collaborated” with Mad Hatter Brewing to make “Dazzle” Beer. Sir Peter Blake had designed his “Dazzled” Mersey Ferry and Museum Cafe for Tate Liverpool. The beer was another brand extension of Blake’s project.

Blake’s Dazzle design on the… ferry commemorated the centenary of World War One and was inspired by the work of ship designers who used the “dazzle” effect to try to avoid detection by the enemy.

The bright and twisty designs made it harder for hostile forces to track the range of allied ships.

(In 1955, package designer Milner Gray wrote about “dazzle painting” as it relates to packaging design.)

But even if Saville’s Switch House ale is not the first “museum beer” ever, it might just be the first canned museum beer.

We will therefore confine ourselves to canned museum beer for what I am now declaring to be “Canned Museum Beer Week.”