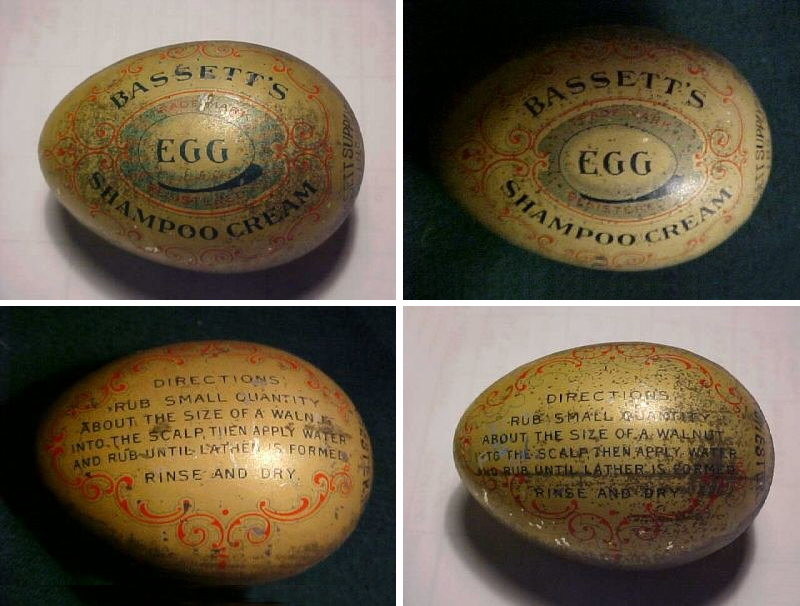 Unusual packaging for a shampoo, but the Bassett Supply Company of Rochester, NY may not have been the only company to use it.

There was also a “Marvelette” brand Egg Shampoo Cream using “a unique package in the form of an egg” on the market in 1910. Also based in Rochester. For all I know, Marvellette Laboratories may have just been a division of Bassett Supply Company. 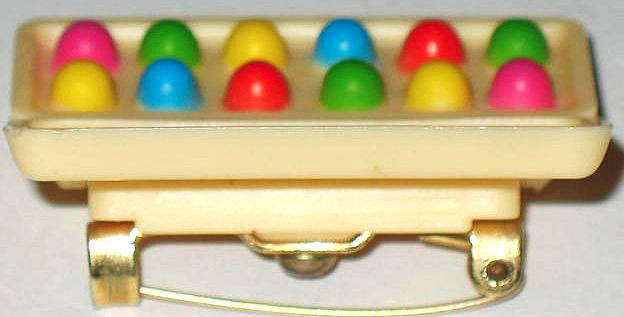 We provide this information as a public service for anyone who is in the market for package-related holiday jewelry.

Photos above, of the 1981 Hallmark Easter egg-carton brooch, are from Ruby Lane. What’s that got to do with the price of eggs? Nothing, in this case, since their listing is no longer online… but keep hunting below and our oddly specific buyer’s guide may prove helpful to your search. 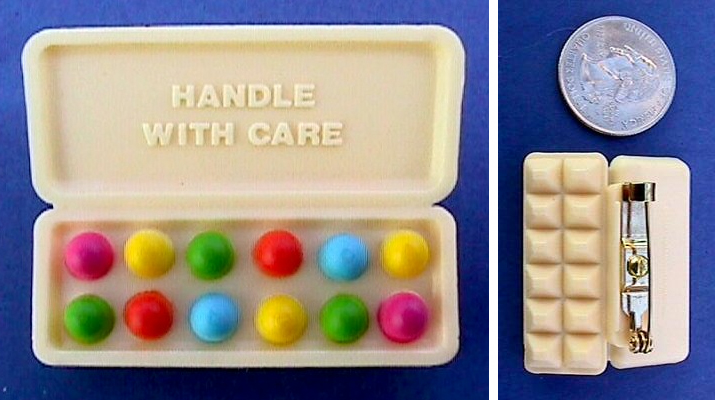 Since today is simultaneously Earth Day and Good Friday, I was looking for a way to somehow connect the earth and (Easter) eggs.

If you search online for “egg-shaped earth,” you’ll find lots of stock photos, mostly of cracked egg-shaped earths meant, I suppose, to symbolize the fragility of life on our planet. (Some even have their yokes spilling out.)

Not wanting to add anything to this already polluted metaphor (planet earth with botchulism?) it was more interesting to me to learn that there is a whole “egg-shaped earth controversy” surrounding a particular translation of the Qur'an. Hence, the video above.

Not everyone is buying it, however. Scientists insist:

The Earth is not quite spherical, due to what is know as “rotational flattening.” It’s not egg-shaped, either, it’s shaped more like a pumpkin.

Earth: Round or Egg-Shaped, Newton Ask a Scientist

Clearly, we’ll have to revisit this topic on Halloween.

If the “long egg” from our previous post, was a deliberate deformation of eggs that consumers, for the most part, were never meant to be aware of—(the whole point, being to create optimal and natural looking egg slices)—there was also an invention, introduced in the 1970s that invited consumers to participate in deforming the egg’s natural shape. The preferred embodiment of this concept? Cube-shaped egg makers.

A good egg, concluded a former knitwear manufacturer in Miami, is a square egg. At least when it is hard-boiled and prone in its natural shape to roll across a plate. Thus Stan Pargman set up the Square Egg Co. to make a clear acrylic contraption that encases a cooked, peeled egg and, after ten minutes in a refrigerator, releases it reshaped. Is the world ready for it? Apparently Los Angeles is. When 1,000 of the gadgets went on sale in May Co. department stores there last month, they were snapped up in one day. A reorder of 5,000 went almost as quickly. The buyers did not seem to care that they could immobilize wandering egg-shaped eggs simply by cutting them in half —and still get a square meal.

More of a novelty item, than a serious effort to solve “the problem” of hard boiled eggs rolling around on plates. And although The Square Egg Company’s owner cites this as his reason for making the product, one must bear in mind that he also has stated elsewhere, that square eggs went well with contemporary furniture.

Reading the 1970s stories about “The Square Egg Maker,” you might think that Stan Pargman invented the device. But you’d be wrong. It was Masashi Nakagawa.

In his patent, Nakagawa explains that the problem he sought to solve with his “Apparatus for Deforming Boiled Egg” was the problem of creating ornamental boiled eggs. “It is very troublesome and time-consuming to change the original natural shape by cutting it with a knife…” he writes, stating that his invention’s true raison d’être was “…to provide an apparatus and a method for changing a whole boiled egg into an aesthetic cubic shape.”

END_OF_DOCUMENT_TOKEN_TO_BE_REPLACED 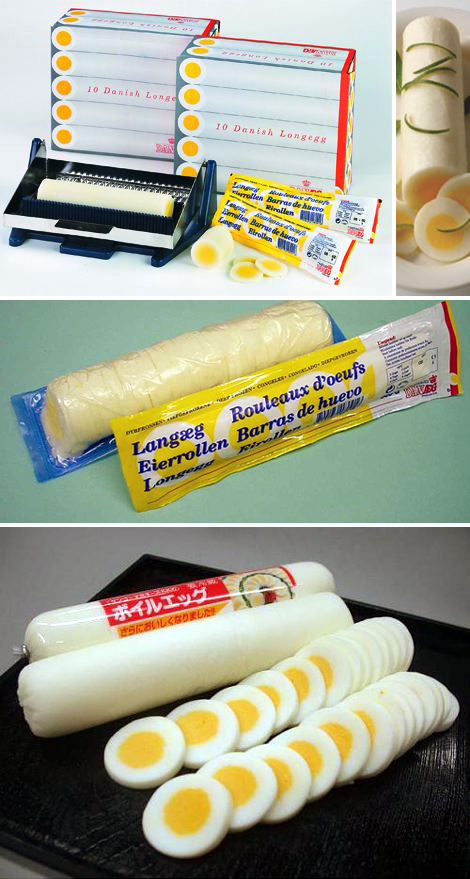 Not many photos of “long egg” packaging to be found online. Probably because it’s more of a “food service” item than a consumer product. (At least, here, in the U.S.)

Long eggs seem to fall into that category of foodstuffs that are strenuously re-engineered in order to solve fairly trivial problems. Watermelons that roll around and won’t stack efficiently… Hard-boiled eggs that yield inconsistent amounts of yolk when sliced.

Thinking that “the egg” is a symbol of perfect packaging, is maybe just a failure of imagination. Like the fried-egg bottle, the “long egg” makes us a little less certain about what “egg-shaped” even means.

One graphic design note about the 10-pack cartons (in the top photo with the long egg slicer): I like the way they’ve organized the product illustrations on the box to be almost a diagram of the contents, arranged inside. Also, I like the cubist perspective of the round cross sections showing in the side views.

(A long-egg-related patent, and a long egg worker, after the fold…)