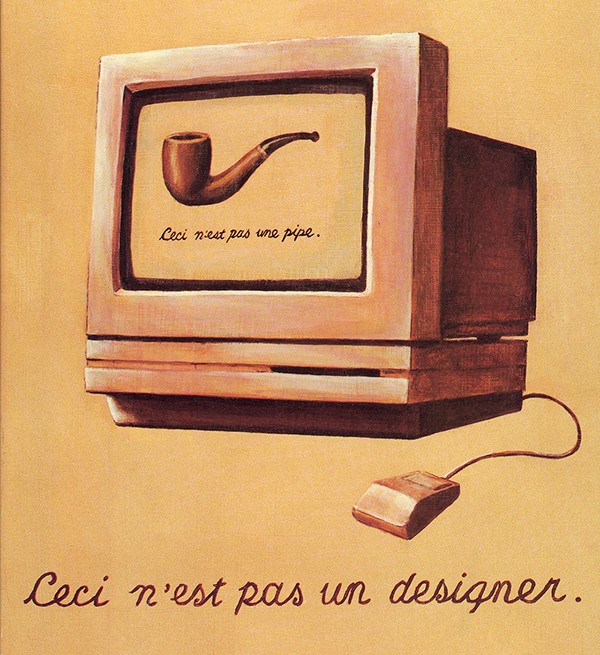 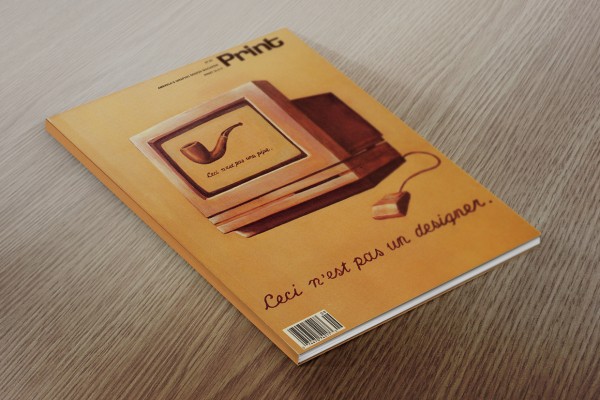 Good one — Howard Schiller’s design for the cover of Print Magazine’s 1991 Sept/Oct issue.

In March 1985, Print published its first story about René Magritte as an advertising illustrator. Georges Roque wrote, “The great surrealist hated making ads—he did so only to survive. Ironically, he is a potent source of inspiration for contemporary advertising.” As such, Magritte’s work was frequently used as the basis of parody and satire by contemporary illustrators. This cover, which sampled Magritte’s “The Treachery of Images” and coincided with the nascent part of the computer-design revolution, made the point that readers of the magazine were the drivers of computers, not the driven.

Print 75: The Best Covers and Articles from the Archives of Print Magazine
Edited by Steven Heller

The trend that Heller cites above (of Magritte’s influence on advertising) continues to this day. It’s certainly present in the declarative branding statements we’ve noted on recent packaging — particularly when those  statements are negative. To say what something is not (rather than what it is) may not be the most direct approach, but it raises questions.

Why do we need to be told that a computer is not a designer?

So in 1991 the Mac was just entering the graphic design scene. We actually called it “Desk Top Publishing” back then. Well, coming out of college it was scary that anyone could now design something. That fear came out in my submission to Print Magazine as part of their annual student cover competition.

Nowadays most designers accept that, to do what they do for a living, they must depend on computers. Automation marches on, but, despite some interesting advances in artificial intelligence, it hasn’t quite gotten to the point where our computers can do this creative work automatically. (Although every designer will, at some point, encounter a client who seems to think so.)

« Packaged (past tense): the Linc-o-lin hand cream bottle
“This is not a negative brand statement” »