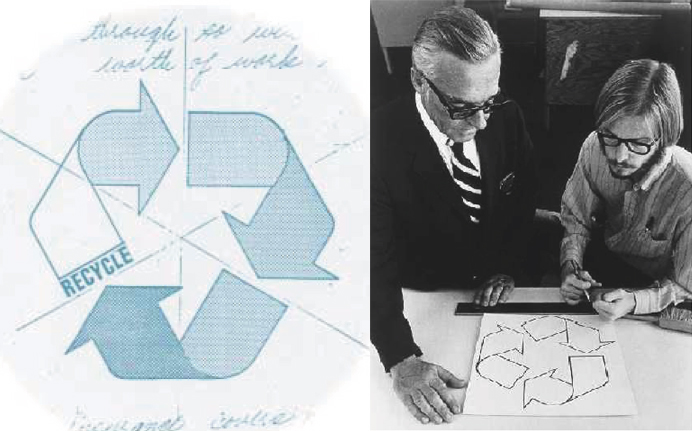 Left: An early sketch by Gary Anderson on left; Right: Anderson & his winning design with Container Corporation of America’s, Hans Buehler in 1970

In 1970, when I was in 10th grade there was a contest, (for high school and college students) which I remember entering, to design a recycling symbol. (A contest, sponsored by the Container Corporation of America.) My family had just moved to Jeffersontown, Kentucky—a suburb of Louisville—and I had claimed a shed in the back yard as ‘my room.’ It was in this shed that I remember spending about 15 minutes drawing my logo entry for this contest with a black felt tip pen. Although conceptually similar to the winning logo by Gary Anderson—(both logos feature a loop of 3 chasing arrows)—my entry was nowhere near as cool. My arrows looked sort of like 3 shmoos chasing each other. His arrows looked like paper gently folding over. (Which made more sense, since paper is generally more recyclable than shmoos.) Better yet, his symbol, with one of its three arrows folded over the other way, made a classic Möbius strip (with one half-twist).

Anderson’s design was originally as you see it above, with one arrow at the base. Container Corporation rotated the design 180° which is how you usually see it today. They also tried to trademark it, but gave up after being challenged, so the logo wound up in the public domain and there are now lots of different versions of it.

« Elizabeth Royte on Packaged Water
Roll Out the Ersatz Barrel »