As poster child for the very idea of “branding,” Coca-Cola has, for a long time, been used to comment on a great many topics, some of which the company (itself) might prefer not to comment on.

Darren Lago’s 2011 sculpture, “Coke45” is one of a series of sculptures he made deliberately conflating “Coke” cola with “Colt” firearms.

A convenient and pithy way to summarize America, the phrase “Coca-cola and guns” shows up surprisingly often. Usually the implication is that these two products represent America’s chief exports.

… it is high time that we began to match the Soviet cultural offensive in scope and imagination, in order to combat the unfortunately widespread notion (sedulously cultivated by Soviet propagandists) that we are the twentieth-century barbarians with nothing to export to the outside world but plumbing fixtures, Coca Cola and guns (the last of which are not as good as those manufactured in Czechoslovakia and the Soviet Union).

After finding a large empty continent (except for the 6 million American Indians who mysteriously vanished) and taming it by the sheer dint of their staggering entrepreneurship and Protestant work ethic, Americans moved on to save Europe by selling them Coca-Cola and guns and warships during the 1940s.

“Mclaren” commenting on a blog post entitled:
Ask and You Shall Receive: Counter to Countering Terrorism Edition
Balloon Juice, November 17, 2015

Being a chief export may not seem to be anything a company should want to disavow, but being paired with the arms industry does create a certain dissonance for the brand that once pledged to “teach the world to sing in perfect harmony.”

Artists and political scholars may use the idea of combining Coke and firearms rhetorically, but it also happens to be a real thing. 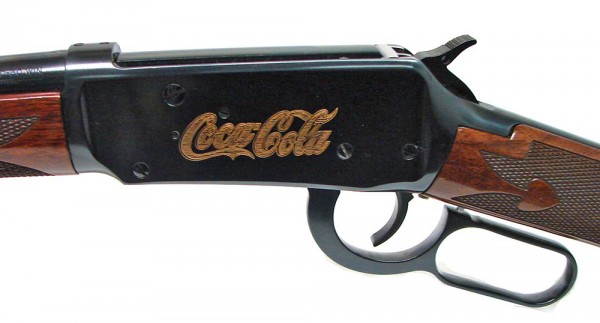 The story of how Coca-Cola’s logo wound up on 1 to 2 thousand, limited-edition Winchester rifles (and their packaging) follows, after the fold… 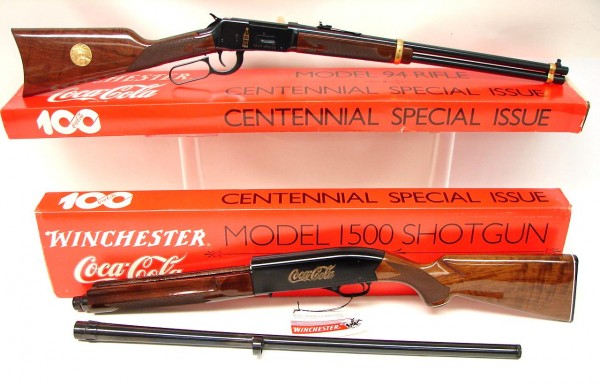 Originally intended as a limited edition of 2,500, the order was apparently cancelled before all of the guns were completed. The number in existence is believed to be less than 2000. Their scarcity makes them more valuable and if the rifle hasn’t (yet) been fired even more so. In some accounts a Coca-Cola executive was fired, but I haven’t been able to confirm whether this is fact or rumor….

Produced in 1986 as part of an order of 2500 sets, actual production fell short of 2000, due to cancellation by Coca-Cola. The guns were warehoused after cancellation, and later distributed to Coca-Cola executives and employees.

Description : 2500 of these Limited edition Winchester 1500 XTR 12 gauge, 28″ barrel, 2 3/4″ chamber semi-auto shotguns were ordered by Coca Cola in 1986 as gifts for their centennial celebration, along with 2500 30-30 lever action rifles. Coke changed their mind, cancelled the order before production completed, and later sold the guns that had already been manufactured to employees or gifted them to VIPs.

Actually the Coca-Cola Winchesters were given to certain exec’s of the company’s without the permission of the Coca-Cola Company. Once The Company found out about it they ordered it stopped. There were supposed to be 2000 made and given out, however no one really knows how many were actually made and released. So the value lies in the collector.

It is our understanding that these sets were ordered by a Coke VP to be given away at a Coke banquet. He ordered 2500 sets. During production of these sets a higher VP in the organization found out about the order and since Coke is very protective of its image the production was stopped., The VP that placed the initial order was fired and it is uncertain as to how many sets were actually made and this set is 1441 of 2500. The part of the order that was finished was later on sold to Coke employees only. The set consists of a 30/30 Winchester and a Model 1500 12 Gauge Shotgun. 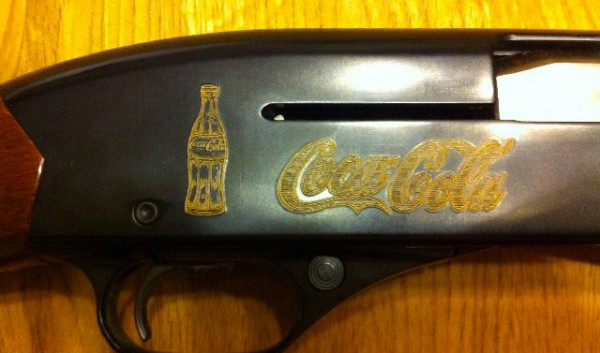 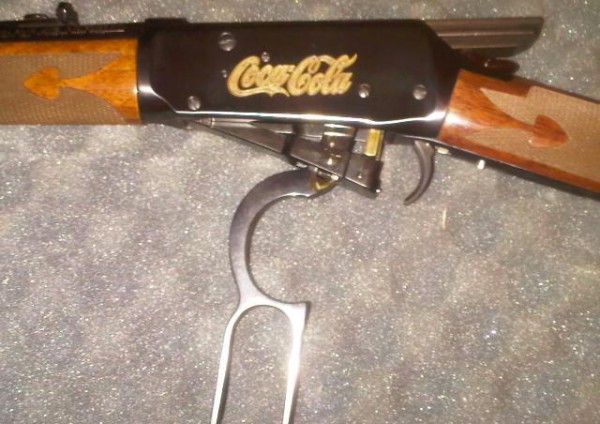 While it might have seemed obvious to Coca-Cola’s public-relations department in 1986 that a brand extension into firearms was not a good marketing move, the pitfalls in today’s America are even more problematic.

Just as congress appears to be largely intimidated by the NRA, so too is any corporation that might signal support for gun regulation.

2nd Vote give Coca-Cola a low 1.6 score on its “Conservative Shopper App” complaining of it’s support for gun control…

The Coca-Cola Company is listed as a corporate donor of the liberal think tank Center for American Progress. The Center of American Progress has proposed sweeping new restrictions on guns and is in favor of stronger gun control.

Thank you for sharing your concern stemming from our participation in last summer’s Aspen Ideas Festival.

For background, each sponsor of the Festival is offered the chance to underwrite one evening as a part of overall sponsorship benefits. The evening that PepsiCo put our name on was an event in which journalist Andrea Mitchell interviewed Gabrielle Giffords and Mark Kelly about their lives since Ms. Gifford’s shooting. Other than to have our logo and name attached to that particular evening session, we have no relationship to Ms. Giffords or to her organization, Americans for Responsible Solutions.

I can further share that PepsiCo has never supported groups that either advocate gun control or oppose hunting.

I hope this information is helpful. Thanks again for taking the time to contact us.

The two illustrations above each use the same idea as in Darren Lagos sculpture (shown at the top of the page).

The one on the left is from a Mother Jones article, entitled, “Which is More Evil: Coke or Pepsi?” and the one on the right is from the 2009 boycott in Guatemala, mentioned below…

Two of its bottlers hired a Colombian paramilitary group to murder union organizers, according to a 2001 lawsuit filed in the US by the United Steelworkers union. The case was dismissed in 2009, but these and similar allegations in Guatemala have sparked boycotts and street protests. Coke denies the claims.

The implication being that, while the Coke-bottle-guns are imaginary, real guns may have been used on behalf the company’s international union busting.

On a lighter note is Joanne Hudson’s 10 minute play entitled “Pop Art” in which “Husbands and wives examine their marriages at a dinner party while arguing over Coca-Cola and guns.”

MAN
I have a gun.

WOMAN
I have some frozen pizza’s in the fridge. They’re Tofutti, non dairy, vegan, whatever.

WOMAN
I heard you the first time. Am I supposed to be surprised by that?

MAN
No. Don’t you want to know where I got it?

WOMAN
Down the street?

MAN
Yeah. They’re giving them away down the street.

WOMAN
Yeah, I saw them when I came out of the grocery store. They come with a six-pack of Coke?

WOMAN
So you actually bought a six-pack of Coke?

MAN
Just for the free gun.

WOMAN
What are you going to do with the Coke?

MAN
I’ll throw it out, okay?

MAN
What would you do if I drank it?

WOMAN
I don’t know, we’d have to seriously discuss our relationship.

Granted, the fact that the wife finds a six-pack of Coke more objectionable than a gun might not be so funny to Coca-Cola. (Although being the butt of a joke is probably less damaging for the brand than being accused of murder.) 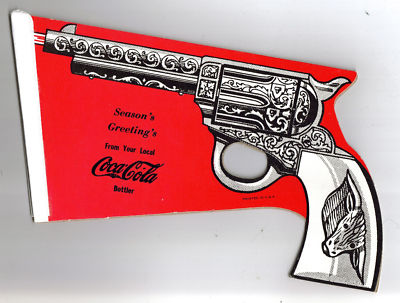