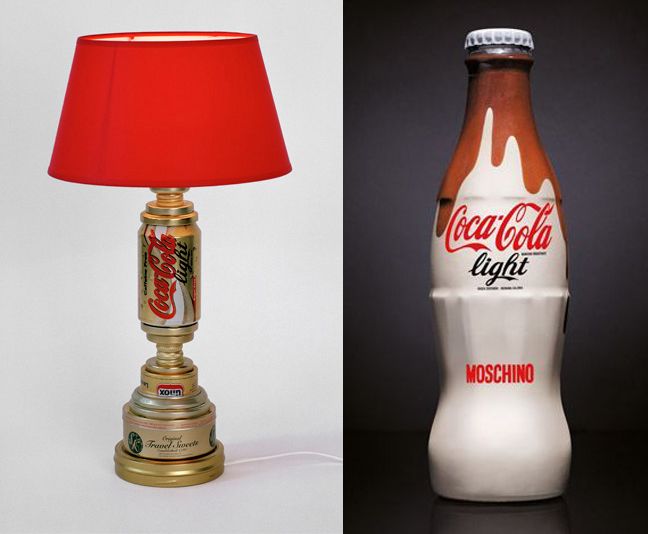 Determined to limit myself to just one example of the “limited edition” designer series, I’ve chosen this overflowing design (on right) by Rosella Jardini for Moschino. One of eight Italian female fashion designers who designed Coke Light bootles to be auctioned at the “Tribute to Fashion Show” in Milian. (Proceeds were to benefit the victims of the earthquake in Abruzzo.)

In photography a “light spill” is something that photographers usually aim to avoid. In packaging, a depiction of a product—even a “light” product—spilling down the sides of a package is an interesting mixed blessing. Food may ooze and drip in a sensuous manner, but how appealing is a sticky package? (See: Parsing Drips & Droplets)

Regarding the double meaning of “light” — Coca-Cola is not unaware of this pun. Check out their 2010 Winter Olympics promotional bottles…

(Another video, after the fold…)

The “glow” bottles are actually battery-powered, bottle-shaped, souvenir lights and not electroluminescent bottles, containing Coke. Numbered like fine art prints, they have inevitably turned up for sale on eBay:

This listing is for a rare 2010 VANCOUVER OLYMPIC illuminated glow bottle! This was designed exclusively for the Vancouver 2010 Olympic Winter Games, and were only available at the Coca-Cola Pavilion in Vancouver, at LiveCity Yaletown.

PLEASE NOTE: The general public had to wait in a line-up for hours to get into this pavilion. These “Glow Bottles” are made of recyclable plastics and 30% plant material. When you exchanged the aluminum bottle that they give you to drink (free) at the end of the tour for a “Glow Bottle”, you were thereby participating in Coca-Cola’s Olympic Sustainability Plan.

These would only be given out after you play at least 1 of 4 activities inside the pavilion, whereby you would get a small sticker on the bottom of your aluminum bottle. In addition, you would only be given a glow bottle after 6pm, when it is nice and dark outside (to enhance the visibility of the glow bottle). Otherwise, you would simply be allowed to keep the aluminum bottle that they give you to drink out of.

This colored bottle is of the rarest series, limited to only 12,000! The more common red “plant bottle” is a 50,000 limited edition series. This is 1 of only 2 that I have! My other one will be kept in my personal collection. Please do not confuse these with the Torch Relay glow bottles! Those are of a series of 250,000, and handed out across Canada with the Torch Relay.

These are a different design!