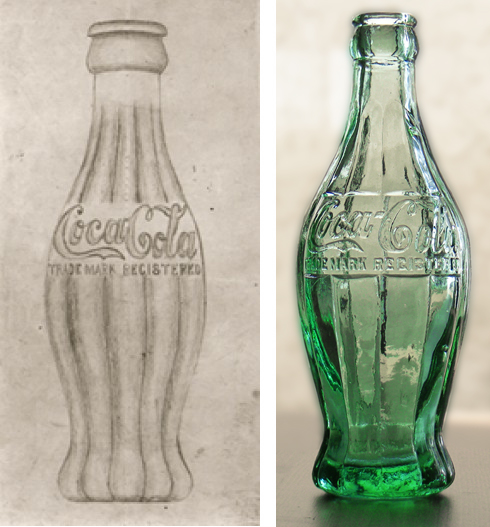 The bottle design patent we showed a while back from 1937 was not the earliest version of the famous contoured Coke bottle. This one is.

If the prototype bottle on the right from 1915 had just been stable enough for conveyor belts, there might have been very different implications in saying that someone had “a Coke bottle figure.”

In 1915, Harold Hirsch, a lawyer for the Coca-Cola Company, came up with a plan to launch a national competition in which bottle manufactures across the country would be asked to design a distinctive bottle — a bottle which a person could recognize even if they felt it in the dark, and so shaped that, even if broken, a person could tell at a glance what it was.

The bottle manufacturer that won this competition was the Root Glass Company of Terre Haute, Indiana. Inspired by a picture of a cocoa pod which was found in an encyclopedia at the Emeline Fairbanks Memorial Library, Earl R. Dean made a pencil sketch of the pod. From this sketch, Dean designed the contour bottle prototype. The prototype never made it to production since its middle diameter was larger than its base. According to Dean, this would make it unstable on the conveyor belts. Dean then equalized the middle and bottom diameters and the Contour Coca-Cola Bottle was born.

The bottle’s design was patented, but with plant superintendent, Alexander Samuelson listed as the inventor/designer, rather than Earl R. Dean, the bottle molding room supervisor who actually designed it. (Such is the fate of those who do work-for-hire.)

As a reward for his efforts, Dean was offered a choice between a $500 bonus or a lifetime job at Root Glass. He chose the lifetime job and kept it until the Owens-Illinois Glass Company bought out the Root Glass Company in the mid 1930s. Dean went on to work in other Midwestern glass factories.

(The patent appears, after the fold…)