Well, lawmakers in Congress will sometimes call proposed legislation a “package.” (As in: “Senate approves spending package on debt.”)

But aside from that usage of the term, you don’t expect to hear a lot of debate about packaging in the halls of congress. And you certainly don’t expect to see many package designers called upon to testify before Congress.

For Day 7 of our extended “Robert Sidney Dickens Week,” we’re going back in time (to Washington) with Sid Dickens.

As I mentioned at the end of the previous post, Dickens is one package designer who has testified before Congress. He appeared before Senator Hart’s 1961 “Subcommittee on Antitrust and Monopoly of the Committee on the Judiciary.” He testified about package design in a hearing on “Packaging and labeling practices.”

But, in a way, Dickens had already “testified” before Congress a decade earlier in a 1950 “Subcommittee of the Committee on Appropriations.”

(More about all this, after the fold…) 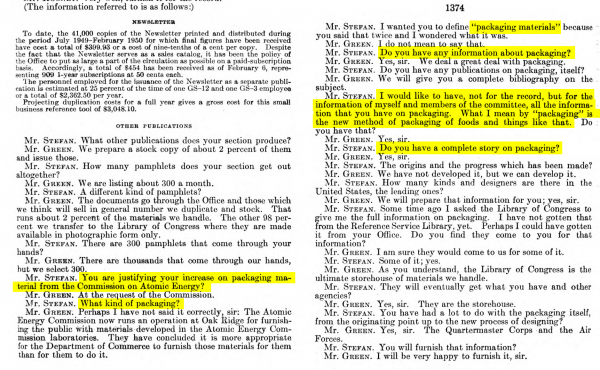 Stefan appears to have become interested in the subject during the testimony of John C. Green (Office of Technical Services, Department of Commerce) who mentioned a hypothetically “much superior packing material for industrial pumps.”

This piqued his interest in package design. So much so, that he later read an article by Robert Sidney Dickens (“The Story of Packaging”) into the Congressional Record. In its entirety.

The growing importance of package design was reflected recently in Congress when … “The Story of Packaging,” written by Robert Sidney Dickens, pioneering member of the package design profession and president of Dickens, Inc., Chicago industrial and package designers… was read verbatim by Rep Stefan to the House and entered into the Congressional Record.

This was a remarkable coup for Dickens. He starts out writing a general history of packaging. By the end of article, however, Dickens is clearly plugging his own new “package design center,” slated to open later that year.

(You can read “The Story of Packaging” in its entirety, by clicking on the photo above.) 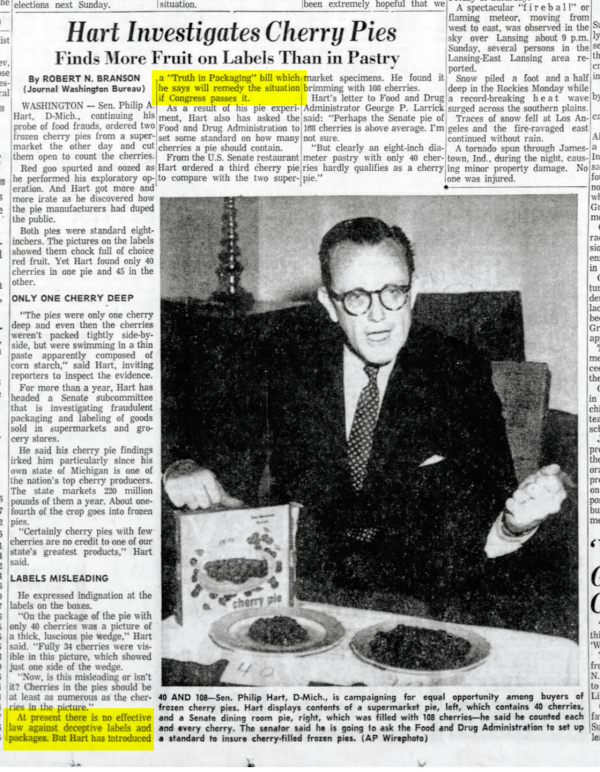 Senator Hart and his subcommittee are to be commended for the important investigation they are now conducting into packaging and labeling practices.

In 1961 Senator Philip A. Hart launched a congressional investigation into deceptive packaging practices. He reportedly noticed two examples that brought this problem to his attention.

First, he noticed that his family’s Shredded Wheat cereal box had become slimmer. The box’s front panel was still the same the same size, but the package’s contents had been quietly reduced.

The second instance was when Hart noticed a huge discrepancy between a product photo on the outside of a frozen cherry pie box and the product contained inside.

Hart sponsored the “Fair Packaging and Labeling Act.” The press preferred to call it the “Truth in Packaging” bill.  And a lot of the press coverage made fun of it.

Robert Sidney Dickens was one of the industry experts who testified before Hart’s subcommittee. He was in good company. Saul Bass and Louis Cheskin also testified in these hearing. 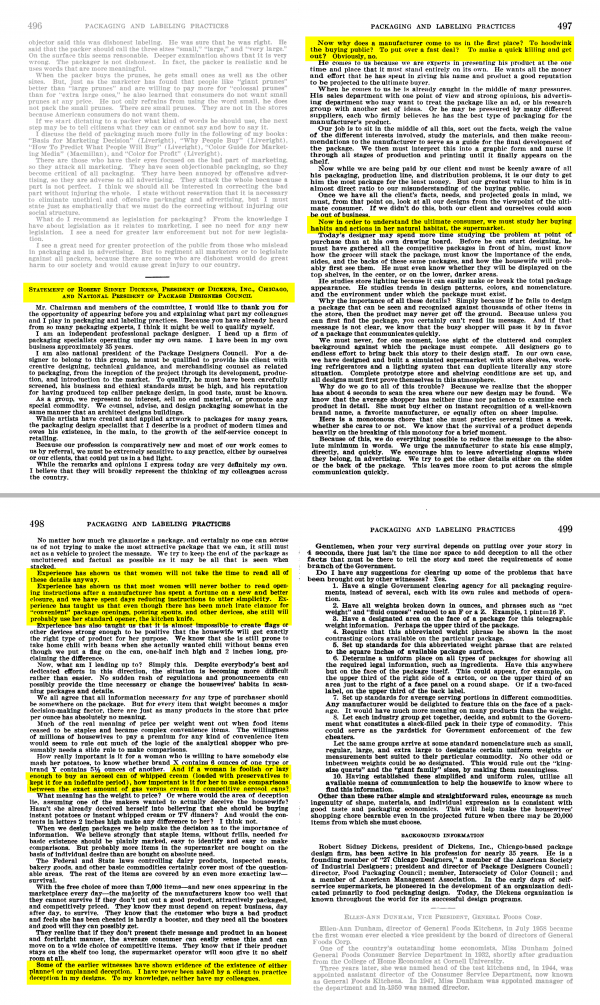 Dickens read a prepared statement in which established his own expertise in the “comparatively new” profession of package design. (You can read his statement by clicking on the photo above.)

He also exhibited quite a bit of the gender bias, typical of those years. He asserts, for example, that to understand the consumer, the package design “must study her buying habits in her natural habitat, the supermarket.”

Dickens, however, was not alone in citing female consumers as a difficult to fathom subspecies. Senator Hart got into a back and forth with a Vice President from Scott Paper about “the women of America.” 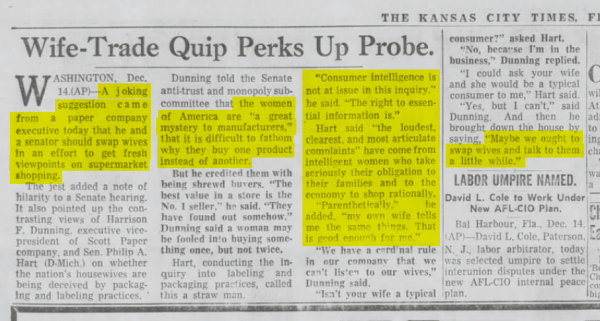 Hart took the high road declaring that “Consumer intelligence is not at issue in this inquiry. The right to essential information is.”  And that “intelligent women” have made “the loudest, clearest and most articulate complaints.” (He also added, “my own wife tells me the same things. That is good enough for me.”) 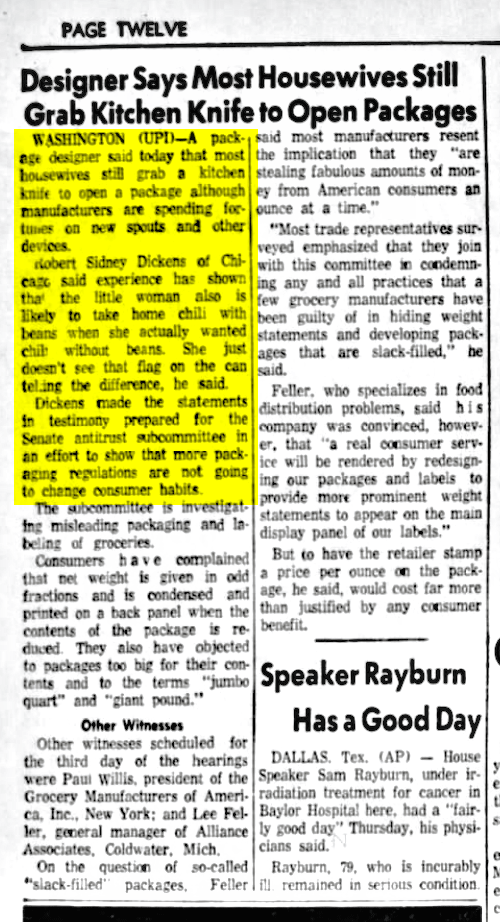 Dickens, by contrast, declared that housewives (including his own wife) will grab a kitchen knife to open a package, rather than to read the instructions.

It’s interesting to note that both Senator Hart and package designer, Sidney Dickens had wives who were not exactly “housewives.”

And such remarks may have endeared him to manufacturing clients, hoping to quash the Truth in Packaging bill. 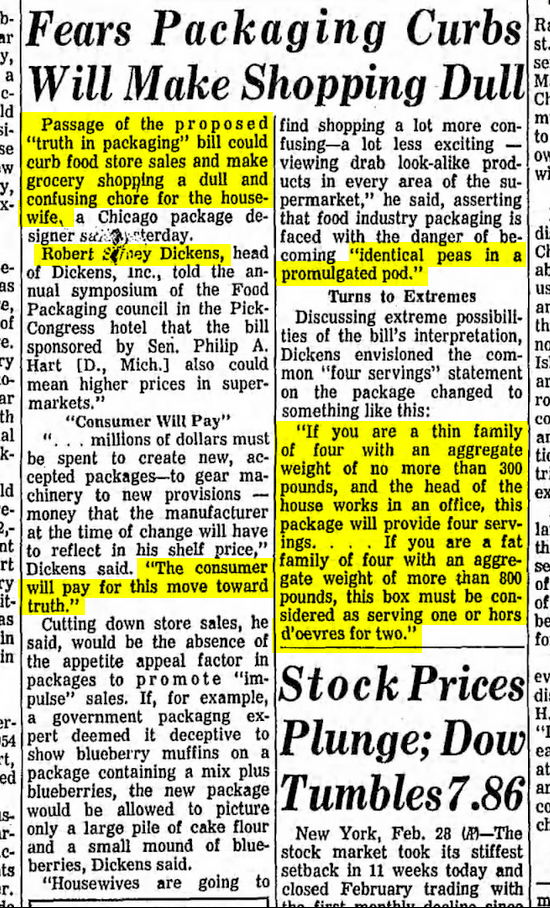 And yet Dickens also capitulated at times, expressing support for a standardized way of communicating important product information. He did this during his 1961 testimony… 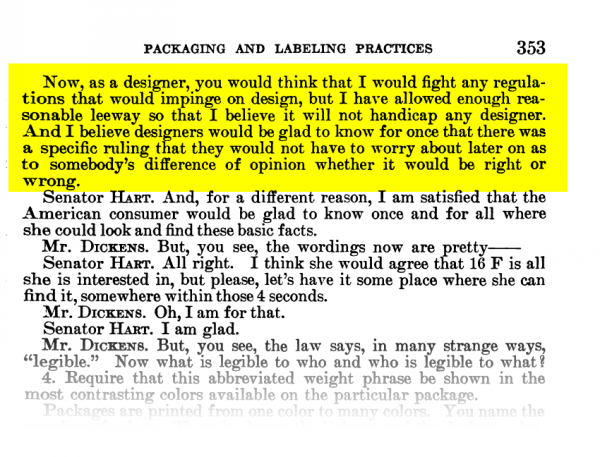 Hart Bill: a ‘veto’ by packagers

The marathon “Fair Packaging & Labeling Act” still is being debated in the U.S. House of Representatives as Modern Packaging goes to press. The prospect of it becoming law this year is uncertain, especially in view of a surprise move by House opponents tabling the measure. This action could kill any chance of Federal packaging legislation, at least until 1967.

But there’s nothing equivocal about industry opinions of this so-called “Truth in Packaging” bill recently passed by the Senate. In a heavy response to a nationwide mail-questionnaire survey by Modern Packaging, consumer-goods packagers and industry associations are virtually unanimous in attacking the measure as unwarranted Federal control of private enterprise …

… Veteran designer Robert Sidney Dickens has this warning: “We view this bill as the foot in the door. The foot gets bigger and the door opens wider; therein lies the danger.” He echoes the feelings of packager respondents by adding that, “in virtually all cases, present laws cover what the Hart Bill re-covers.”

Despite the opposition, Congress ultimately passed the Fair Packaging and Labeling Act and it was signed into law by President Lyndon B. Johnson that same year.

And by 1969, Robert Lee Dickens, is echoing his father Sidney’s earlier position, and praises the Truth in Packaging laws for having “given us rules instead of guesses.”