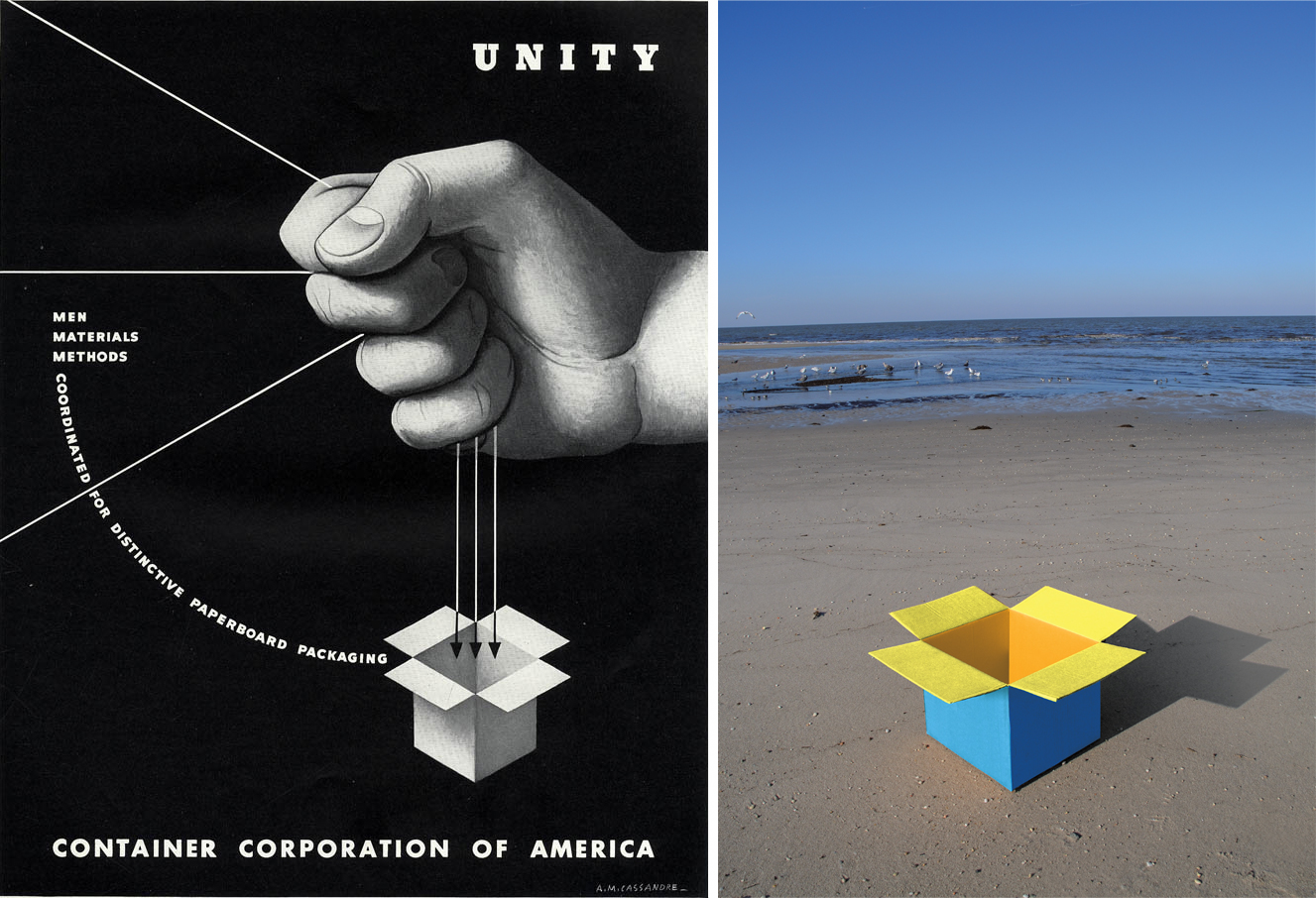 The pairs of images in this “Similarities” set are similar visually in one way or another. They are presented without judgment as to the motives of their creators. The viewers of the pieces can form their own opinion(s) about what they see.

Some are “accidents”: The creator of the similar piece had no knowledge of the original.

Some are “re-contextualized”: Obscure imagery from long forgotten sources was used.

Some are “inspired”: They are either obviously or vaguely similar to one another.

Some are “homages”: In order to pay homage to an existing piece, the original design should be widely known.

Some are “appropriated”: They contain—as the primary image on their piece—the original (and usually, but not always, uncredited) visual source.

I like this separated-at-birth sort of thing and I do something similar here—although, usually when I show a pair of images together on boxvox, it’s because of a shared underlying concept rather than a similar layout.

Caruthers very charitably presents his Similarities “without judgment.” But really, even when we aspire to take the higher (non-judgmental) ground, the question of precedence and originality is still very much on our minds.

Reading over his list of motives, the least problematic (in my view) are the “accidental” similarities. For this explanation to be plausible, however, the similar examples must represent either (A) a pretty obvious idea or (B) a “great minds think alike” situation. Which brings us to my second recent discovery:

2. Container Corporation of America’s 1938 logo —(if the box below the fist in the black & white ad from Fortune Magazine can be considered their logo)— looks an awful lot like our Beach Packaging Design logo, (also used sideways for this blog).

Are the comparisons made here on boxvox odius? Is it karma that I should now have to ask myself whether our logo is just a really obvious idea or one of those a “great minds think alike” situations?

I like the simple geometry of this kind of isometric perspective, but clearly I’m not the only one to ever notice that a regular hexagon can represent a box (and that two equilateral triangle can represent the inside of an open box). And, like many other package-related companies, our logo is one of those package-containing, pictorial logos. All of this goes (obviously) in column A.

As for column B, since the similarities here are accidental, and we had no prior knowledge of this particular CCA ad from Fortune magazine—and given that CCA was well known for hiring the most genius graphic designers (Paul Rand, Saul Bass, etc.)—I don’t think the coincidence reflects too poorly on us.

The black & white “Unity” ad, above, was by Adolphe Mouron Cassandre. Would I sound too much like Wile E. Coyote, (delusional) super-genius, if I were to suggest that this was a great-minds-think-alike situation?

The photograph of the box on the beach was taken for the 2008 Beach Packaging Design holiday card—the idea being to put our logo into a real world, wintertime beach context.

It was a windy, cold day on a beach in NJ. No snow, but so cold it was painful. And so windy that, when we set the box down on the beach, it immediately began rolling toward the water.

Not wanting the box to get wet, I raced after it and pretty much fell into the water. This made me very, very cold, but I did manage to save the box. Undaunted, I found a heavy rock to put in the box. Which kept it in place while Debby (who still had the full use of her fingertips) took the photo.