Robert Sidney Dickens founded the Dickens Design Group in 1931. An early specialist in package design, Dickens’ Chicago-based firm designed these two logos for packaging-related companies. He was also the guy who later designed the original “TaB” logo for Coca Cola.

Lately I’ve been researching Dickens and his work and have found a lot of interesting stuff. (At least: it’s interesting to me.)  I found too much to include it all in one post, so I’ll be doling it out in bits and pieces.

Let’s call this “Robert Sidney Dickens Week” with the understanding that it may take me a month or more to actually roll it all out. Please bear with me.

Barbara Baer Capitman included both of the logos above in her 1976 survey of American Trademark Designs. (She also included 18 other logos by Dickens Design Group.)

The packaging part of these 2 logos will be obvious, but “Where’s the crime?” you ask.

Asked and answered, after the fold…

Pax-Fax, Inc. was the Dickens Design Group’s own “packaging research branch.” They designed its logo in 1950.

Like “box vox” they gave their research company a self-rhyming brand name. It sounds like Latin, but they clearly intended for “Pax Fax” to mean “packs facts” (i.e.: facts about packaging).

In between “PAX” and “FAX” Dickens inserted a symbol which simultaneously resembles both an eye and a pair of precision calibers. Within the eye (or the calibers depending on your point of view) he put a box diagram with a series of dots running from left to right. You might think it was a symbol for a fax machine, except that Dickens designed this logo in 1950 before such machines even existed.

Not much information survives about the company’s work, except for one (petty) crime-related packaging fact.

…a survey by Pax Fax Inc. … found that, regardless of value, merchandise in small packages was more often pilfered than the same merchandise wrapped in or glued to large packages.

Other supermarket “tricks” of pilferers include filling the deceptively large boxes of soap flakes or cereal to the brim from other boxes, and switching caps (on which prices are stamped) of small bottles of hand lotion or shampoo to large bottles having the same size cap. Dave Chapman, a leading packager says, “The philosophy of self-service and open-rack merchandising is predicated on the increase in sales appeal by removing the inhibitants between the consumer and the product. The closer we get the consumer to the product, the higher the chance he will buy.”

The higher the chance, too, that he will steal. 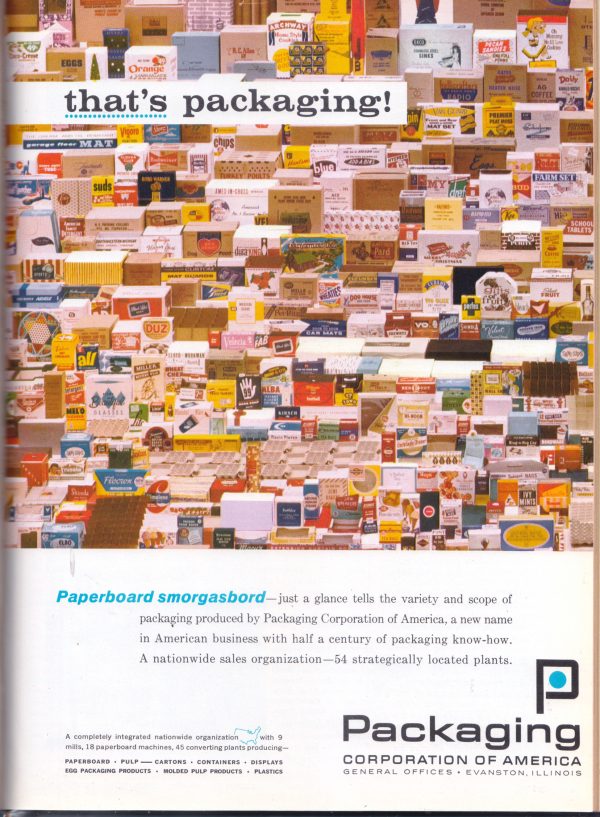 Packaging Corp. of America has adopted a bold new emblem, one version of which is shown above, as its signature. The large “P” with a dot in the center is designed, the company says to “give a feeling of strength, size and stability,” but with a connotation of flexibility and growth potential.

The new logo emphasizes the word “packaging,” to integrate with the phrase “That’s packaging!” which appears in all the company’s corporate advertisements.

In her book, Barbara Baer Capitman tellus that Dickens Design Group designed the logo in 1963.

But seeing how Industrial Marketing magazine was writing about the “bold new emblem” in 1962, we began to doubt the accuracy of the 1963 creation date.

Indeed, the trademark registration below confirms that its “first use” was in 1962. 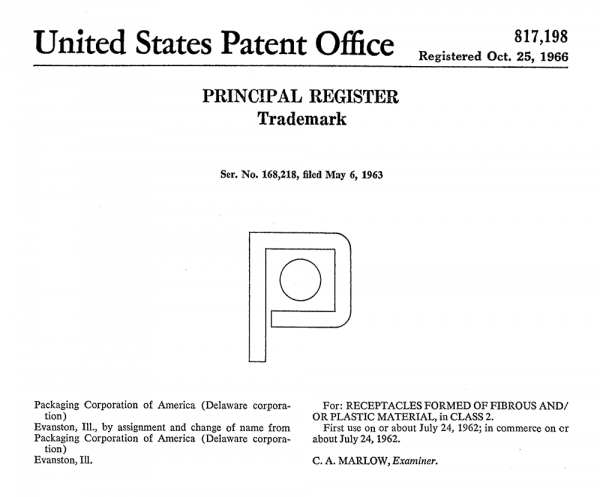 Looking for further examples of PCA’s catch phrase, I found a few artifacts on eBay and elsewhere showing its usage.

They included it on the 1965 sign. (from PCA’s history webpage) 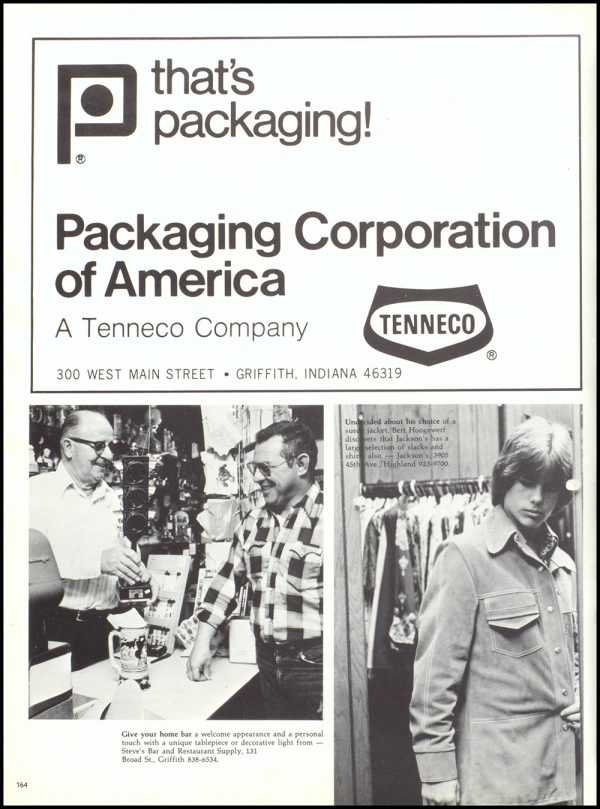 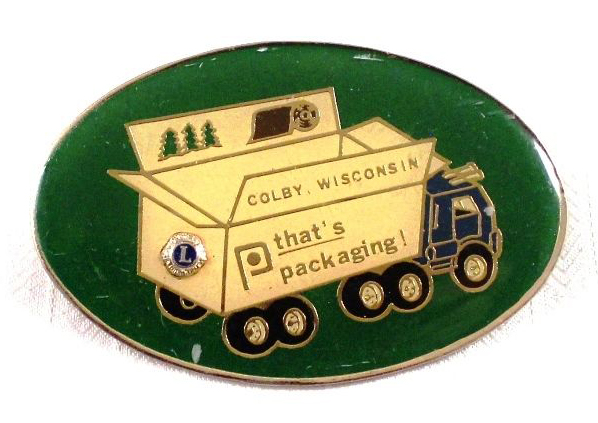 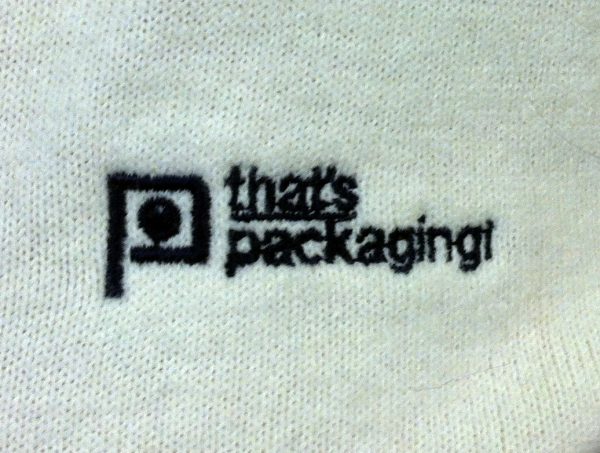 In addition to those examples, we also found the embroidered version of the logo on a sweater mentioned in a 2015 Packaging Corporation of America blog post:

Kathy has been a PCA employee for 42 years.

Kathy had this sweater packed away since her early days with PCA when our logo was the letter “P” and our tagline was “that’s packaging!”

Our logo and tagline may have gone through some reincarnations over the years, but PCA still represents the same ideals: People. Customers. Trust.

And on that note, let us now turn to the 1976 indictment of Packaging Corporation of America (along with 22 other manufacturers of folding cartons) for price fixing. 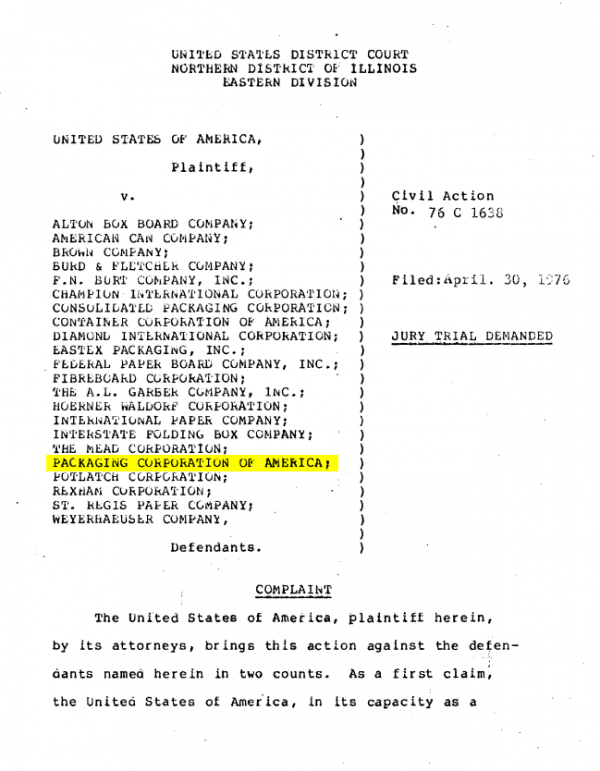 Crime and Packaging Corporation of America

A Federal grand jury today charged 23 manufacturers of folding paperboard boxes… with engaging in a criminal conspiracy to fix prices.

… The result of the price fixing conspiracy, according to the indictment, has been to keep the prices of folding paperboard boxes higher than they otherwise would be and more stable.

Now, we don’t want to single out PAC unfairly. They were, after all, in ‘good’ company since all the leading companies were part of the conspiracy.

I do, however, feel sort of bad for Alton Box. Their name appeared first in the alphabetized list of defendants. Because of that, history has named the case: U.S. v. Alton Box Board Company, et al.

… all but one of the corporate executives pleaded guilty; later some tried to change their pleas to nolo contendere, an effort that was vigorously opposed by the government.

These defendants were not engaged in a short-term violation based on sudden market pressures; price-fixing was their way of doing business. The participants demonstrated a knowing, blatant disregard for antitrust laws. One grand jury witness testified that during a six-year period he personally engaged in thousands of price-fixing transactions with competitors which were illegal. … The thousands upon thousands of exchanges of prices with competitors, the dozens of meetings with competitors were done with a single purpose and design—to eliminate price competition in this industry.

More recently, former customers brought a class-action, antitrust lawsuit against Packaging Corporation of America and 8 other manufacturers. (Although, this time they actually named the case after PCA.)

Packaging Corporation of America (“PCA”) has agreed to pay $17,600,000 and to provide certain other consideration to settle the case. PCA denies any liability.