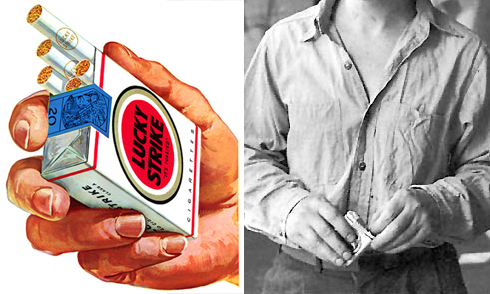 And long as we’re cataloging the vices and brand choices of the late Willem de Kooning… The detail (above right) from Rudy Burkhardt’s 1950 photograph—“Willem de Kooning (with cigarettes)”—shows that the brand of cigarettes that de Kooning smoked was “Lucky Strike.”

Photographer Rudy Burkhardt, who Willem introduced to Elaine, later recalled that “Bill was incredibly in love with her, but she didn’t treat him very well at the beginning .. She would lean back on the couch and say, ‘Bill. Cigarette.’ And he would leap to get it.” 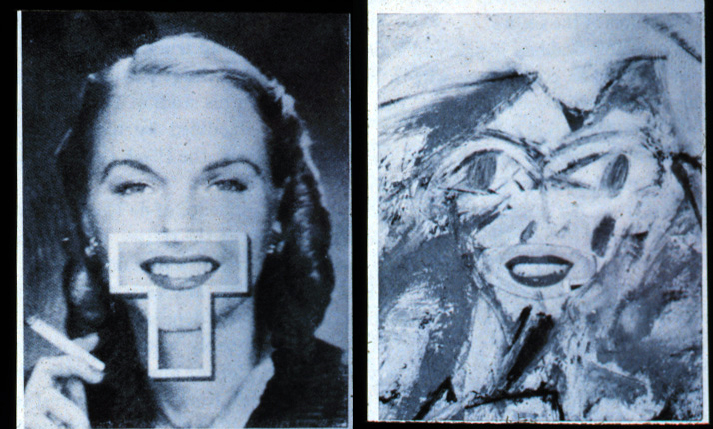 “I cut out a lot of mouths. First of all I thought everything ought to have a mouth. Maybe it was like a pun. Maybe it’s sexual. But whatever it is, I used to cut out a lot of mouths and then I painted those figures and then I put the mouth more or less in the place where it was supposed to be. It always turned out to be very beautiful and it helped me immensely to have this real thing.”

“Richard Shiff points out Ihat Hess [Thomas B. Hess] erroneously identified the the T-zone ad as being for Lucky Strike, when in fact this imagery accompanied Camel cigarettes.” 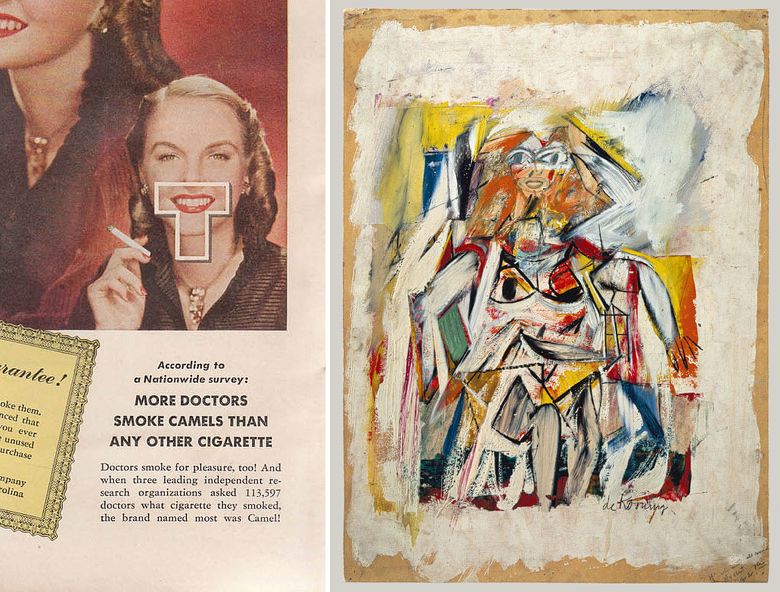 Most likely this misidentification was because Hess knew that de Kooning smoked Luckies and somehow assumed that the artist’s choice of source material would coincide with his brand choice.

(One more de Kooning / cigarette-related artwork, after the fold…) 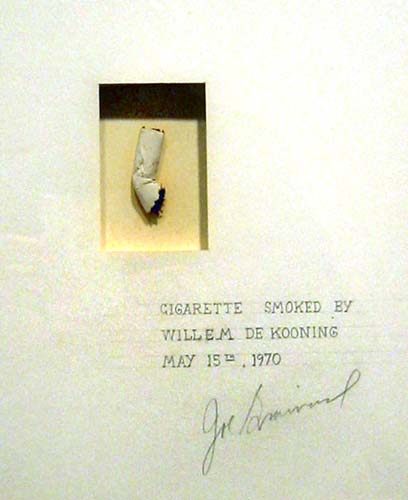 Similar to the fetishistic nature of Rauschenberg’s Erased de Kooning, Joe Brainard was also in awe of certain art-world celebrities…

As soon as the visitors departed, Joe rushed to de Kooning’s ashtray and rescued a butt, which he later glued to a piece of mat board, titling it “Cigarette Smoked by Willem de Kooning” and dating it May 15, 1970. Later he gave this objet trouve to Joe LeSueur. Over the years the butt’s nicotinic acid has gently suffused itself into the area around it, as if creating a halo around a relic.

Joe: a memoir of Joe Brainard, by Ron Padgett