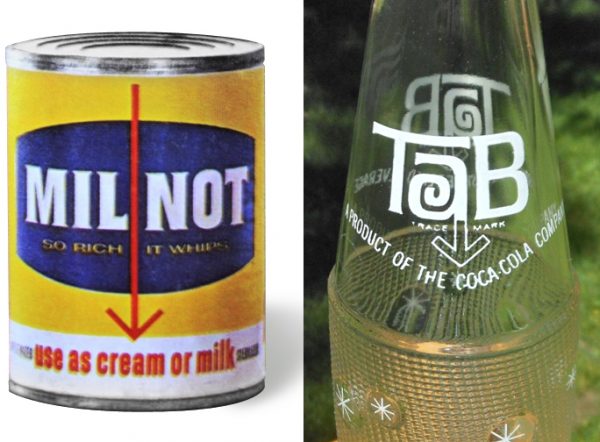 For day 3 of our Robert-Sidney-Dickens–Week, we bring you 2 package logos that he designed, both with downward-pointing arrows. In each case, he used the arrow to highlight a tagline or product feature below. And in each case, someone later decided to simplify the trademark and remove the arrow.

The Milnot brand was new to us, but I’ve found newspaper ads dating back to 1957 showing the Milnot milk can with the arrow bisecting the brand name. So I figure Dickens must have designed this version of the logo around 1957.

The TaB logo, we know Dickens designed in 1963.

Plenty of designers have used arrows to direct visual attention. But Dickens made the unusual choice of using downward-pointing arrows. Twice. Some might argue that this a negative direction — a “downer” for the brand. But (to those people) I would just point out to the positive virtues of a brand being “down to earth.” 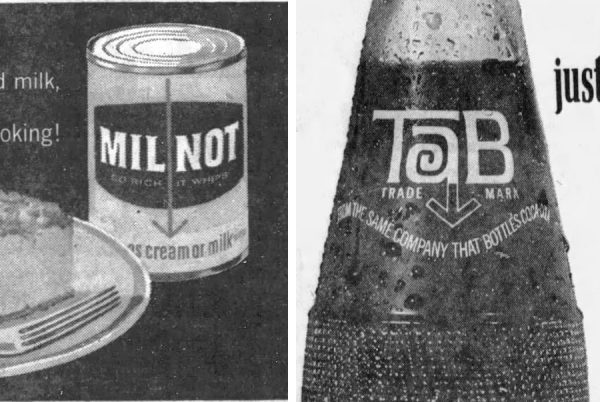 Meanwhile, what are the messages that these downward-pointing arrows actually point to?

Milnot started out by highlighting the product’s use: “use as cream or milk.” TaB, on the other hand, made Coca-Cola’s brand equity a selling point: “FROM THE SAME COMPANY THAT BOTTLES COCA-COLA.”

We point out a few other things about each brand, after the fold… 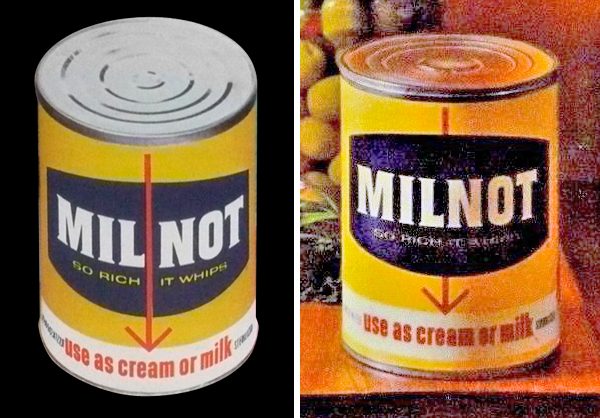 Personally, I like the prominence of the red arrow in Dickens’ original 1957 design. I like the way it bisects the entire can, directing so much emphasis to the red type at the bottom of the label. But you’d be right to point out that it does interfere with the brand name, requiring an unusually large kerning space to accommodate the arrow’s path.

By 1964 the designer had pushed to the arrow to the background and given the logotype a more legible spacing. 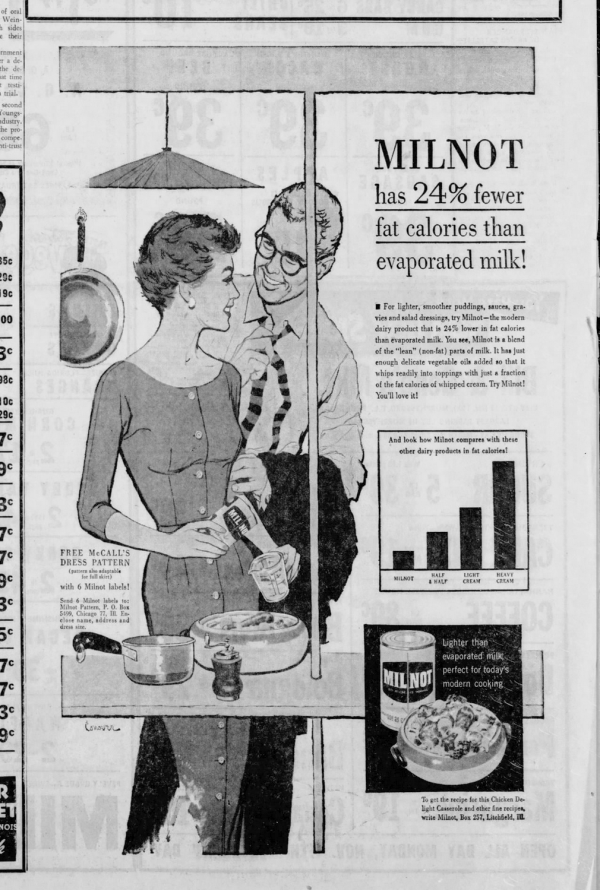 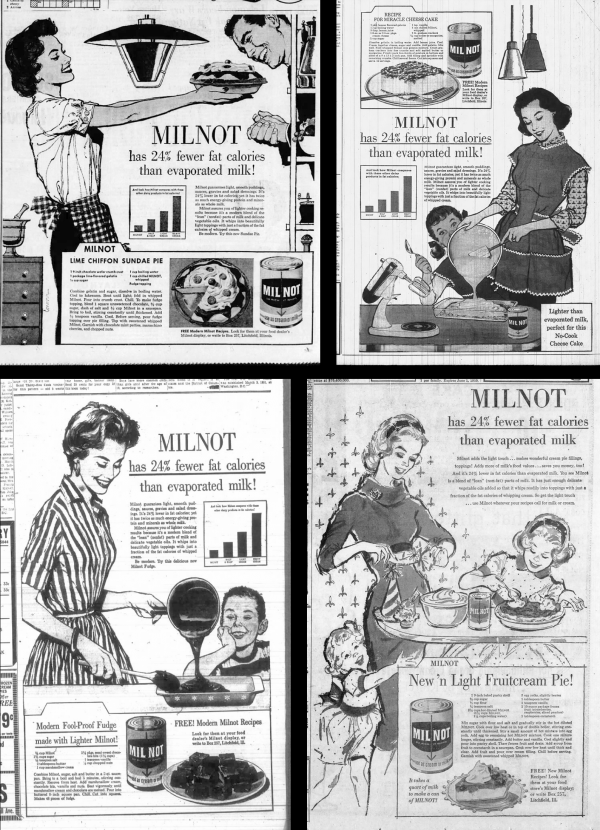 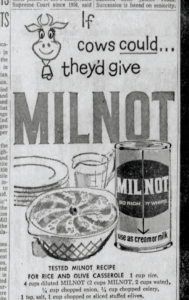 Even though some of the arrows are printed too dark on the newsprint to distinguish from the background, we can tell that these ads depict the arrow-in-the-foreground version of the label. The extra space between the “MIL” and the “NOT” is undeniable.

In addition to the Marilyn Conover (happy-homemaker-ish) campaign, there was also the mascot cow’s message, first introduced in 1961: “If cows could… they’d give MILNOT.”

The 1961 ad on the right might be an overlap of both campaigns. This was the year that they first starting using the “cow” slogan, and the style of the illustration below seems in keeping with Conover’s looser style in the 1960s. 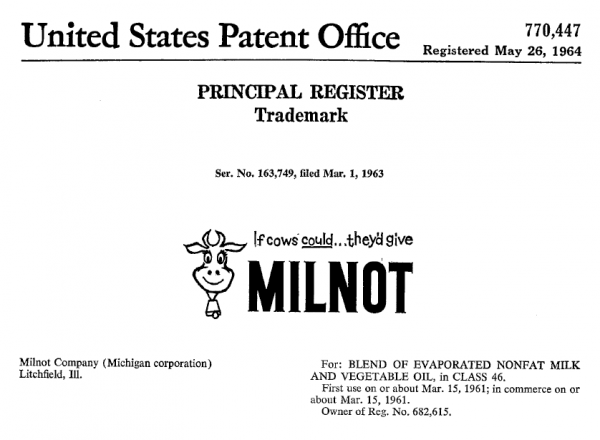 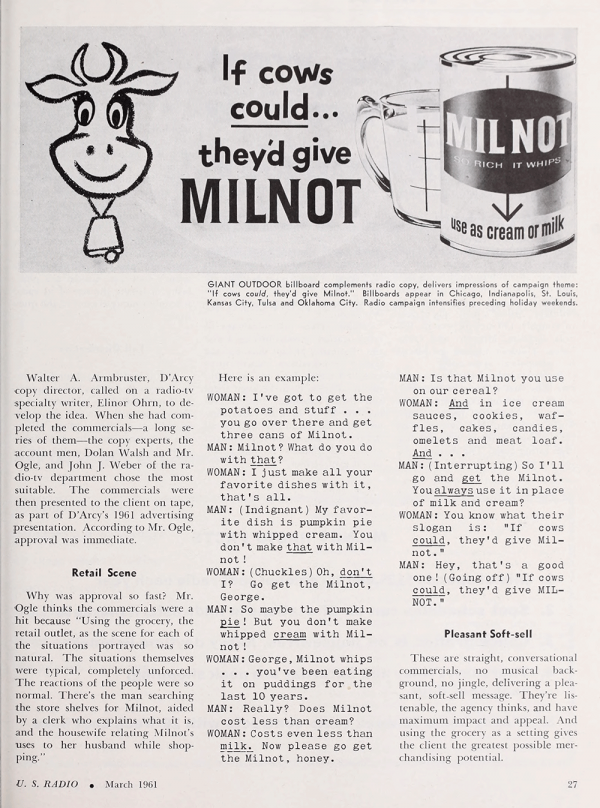 Walter A. Armbruster, as copy director at the D’Arcy advertising agency, wrote the new slogan.

By 1961, the agency had decided to go ahead with more radio, especially in non-metropolitan centers. Purpose was to broaden the reach, drum in the slogan, “If cows could, they’d give Milnot.”

On the right and below are two versions of the Milnot cow newspaper ad.

The vertical ad on the right was published in 1963 and shows the label with the arrow still in the foreground. (Again, we know this because of the letter spacing.)

The horizontal ad below was published the following year in 1964. Here they used the arrow-in the-background version of the label. 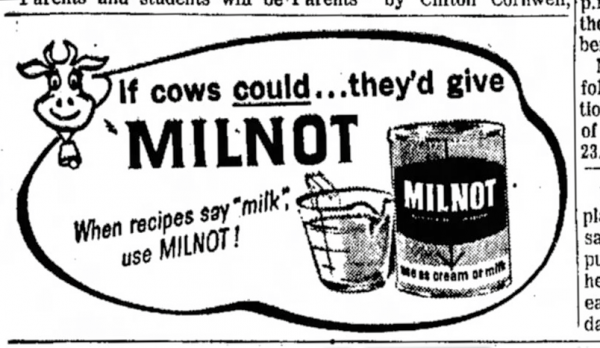 Based on that evidence, we figure Dickens made the change in 1964.

In 1968 Milnot launched a new print ad campaign, characterizing its product as “The DO-IT-ALL.”

By this time the Dickens Design Group had become well-versed in this 60’s style hand lettering. I’m not sure whether Dickens had a hand in the advertising, but it looks like their work.

They continued to use the still-classic label with the arrow, now in the background.

Note how, in the 1968 newspaper ad below, they also continued using the “cow” mascot and slogan… 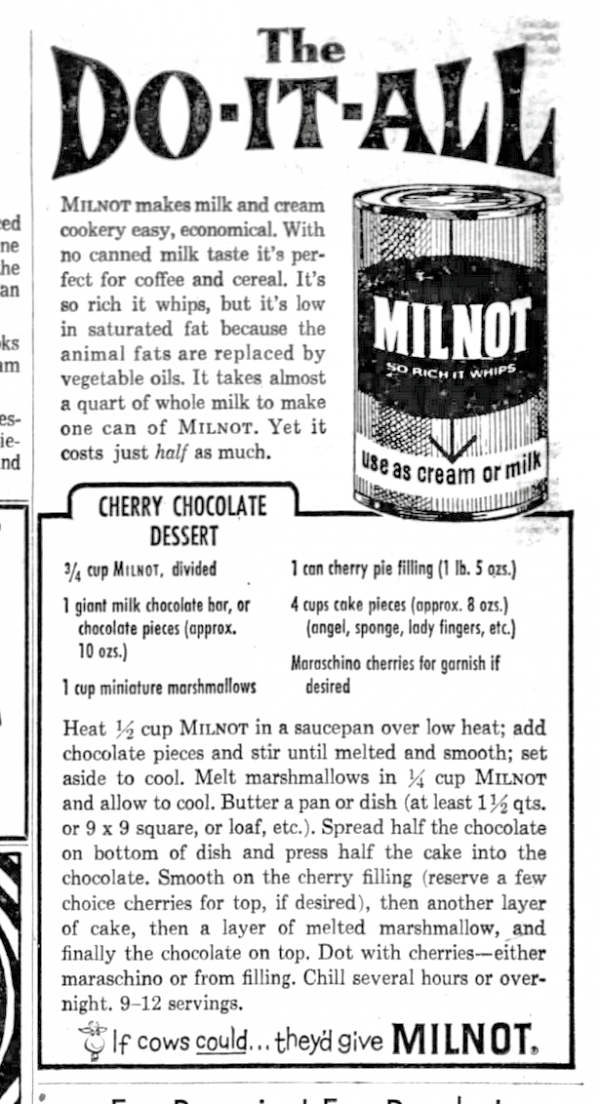 In addition to those, Milnot also published some full page newspaper ads as part of the same campaign. If the reproduction quality of the photographs seems noticeably better, I think I know why… 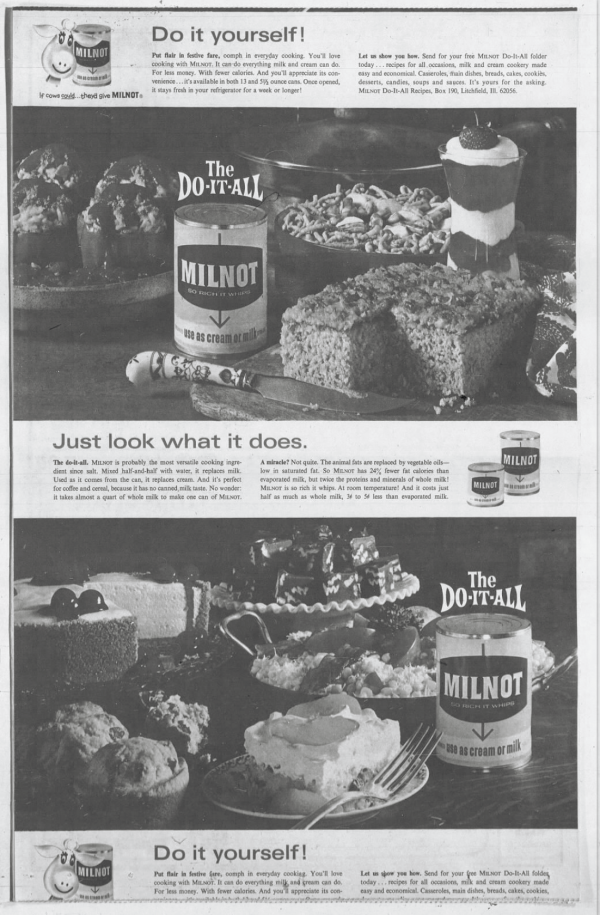 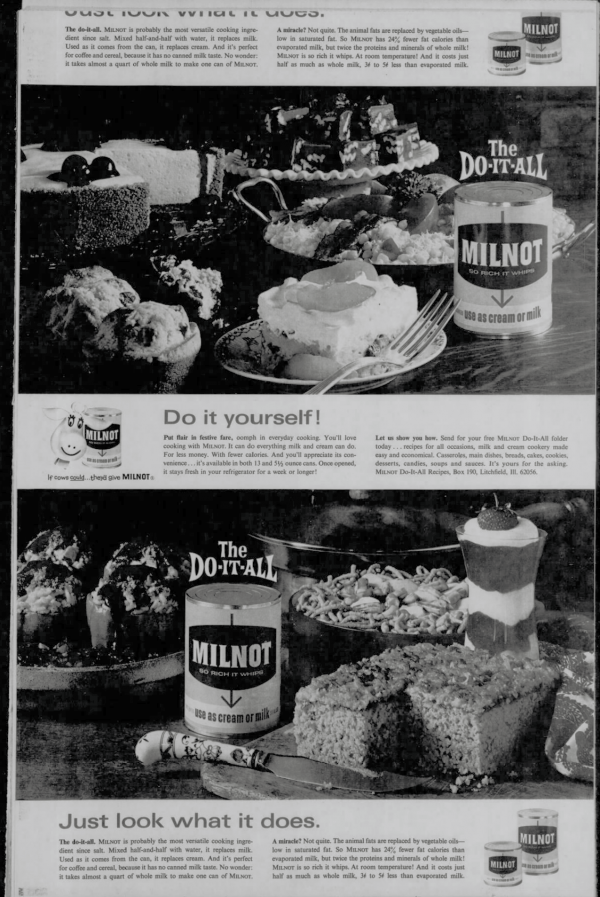 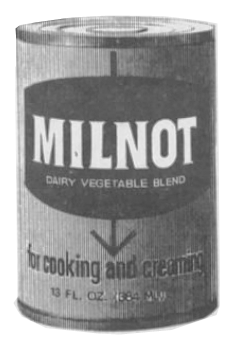 You may notice that portions of the ads repeat and are even cut off at the top or bottom. Why is this? Because they printed these ads separately on a continuous roll, later cutting them up and inserting them in a number of national newspapers. For all I know, they might have even printed these in color.

We’ve seen this before. They designed the ad as a repeating pattern so that any tabloid size piece would include all of the ad’s sections at least once. (See: also 1958 Reynolds Wrap insert ads)

In 1980, as many consumers were trying to avoid high cholesterol foods, Milnot made two changes to their front label. They changed the tagline under “MILNOT” from “SO RICH IT WHIPS” to “DAIRY VEGETABLE BLEND.” And they changed the arrow’s message from “use as cream or milk” to “for cooking and creaming.” 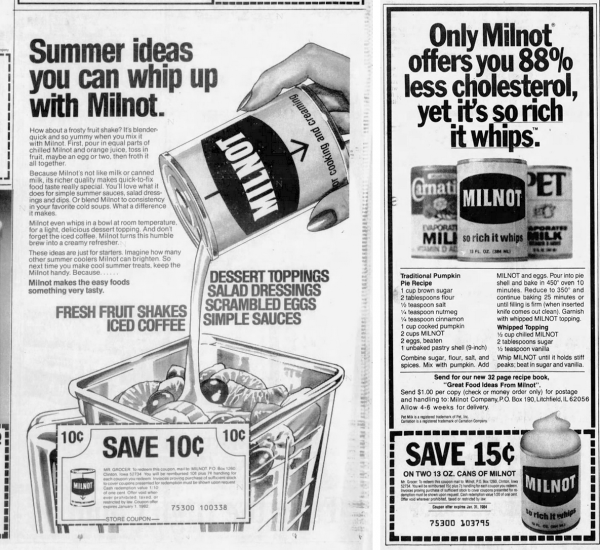 Milnot continued to use the arrow-in-the background layout up until 1982, but by October of 1983, they had removed the downward-pointing arrow entirely.

Just as he did with the Milnot milk label, Dickens used his downward-pointing arrow in the TaB logo to highlight a message below. But where the Milnot company mostly stuck with the same message, the Coca-Cola company frequently changed the wording and the message of TaB arrow’s tagline.

The design was commissioned to Robert Sidney Dickens Inc. of Chicago. For the logo, the initial decision was to have all uppercase block letters. However, Dickens felt that exaggerating the “T” would make the name more memorable, so the “A” was lowercased to fit in the new design, but was given a swirl and a downward pointing arrow to keep it from being lost.

While I can see how his inclusion of an arrow in the TaB trademark gives it a “way-finding” aspect, I don’t really see how it keeps the logo “from being lost.”  You could just as easily say that the arrow diverts attention away from the logo. As if to say, “Hey, look down there!”

And, indeed, the logo and its arrow had some detractors.

Here is how they went about designing a trademark for TAB in 196o… The designers started with classic block capital letters. Then they changed the “a” to lower case to achieve informality. And then they extended the “T” to make the trademark easy to remember. …a twist-around ‘a’ was employed to draw attention to the name and make it further easy to remember. An arrow was used to point down on the bottle to the slogan. (And how many of us, to this day, know what that slogan is? ) 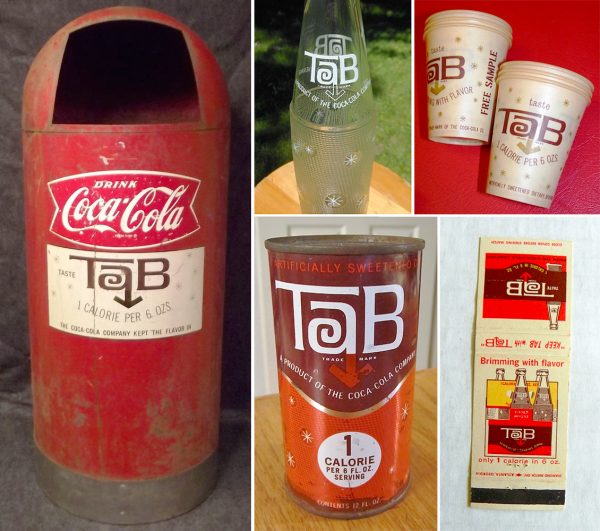 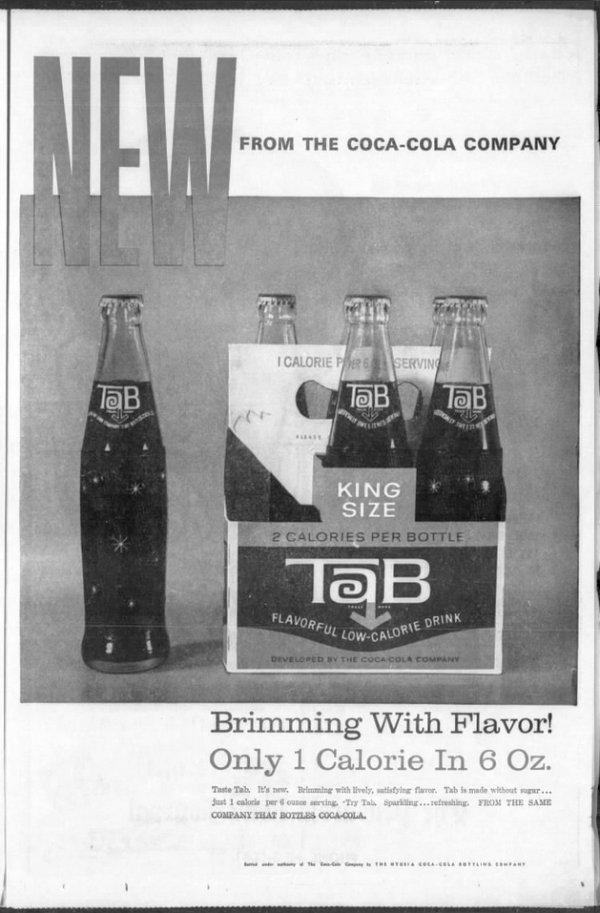 Judging from the TaB’s newspaper advertising, the company continued using the TaB trademark with the arrow up until late 1969.

New TaB (with no arrow and no cyclamates)

Just as Milnot milk removed their arrow (right around the time they began highlighting their low cholesterol product claim), TaB remove their arrow when they removed cyclamates from their product.

I ask you, are arrows inherently unhealthful? 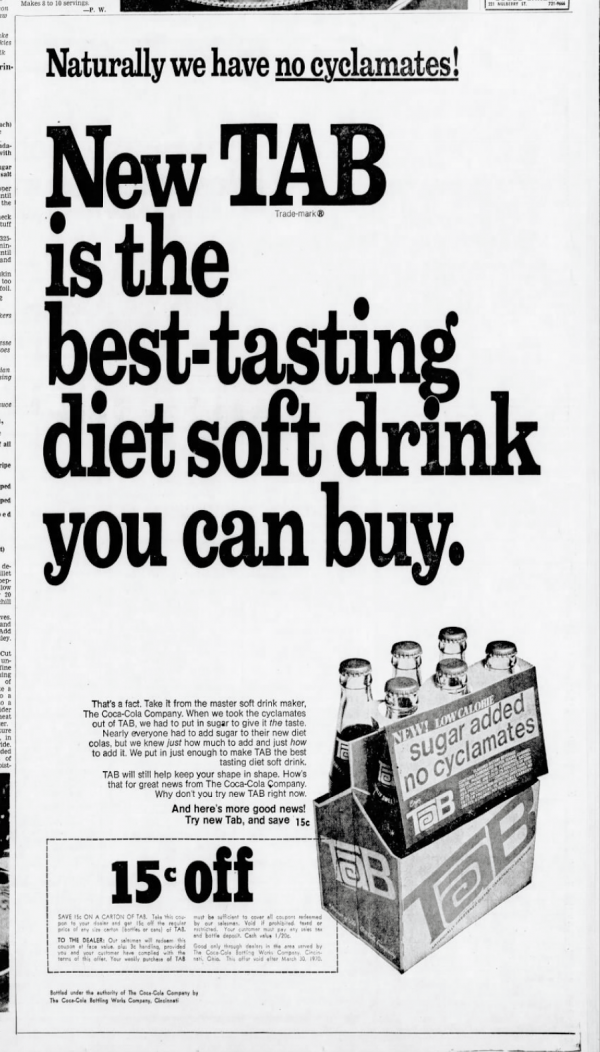 Funny thing is, TaB actually applied to register an alternate, no-arrow version of Dickens’ logo design way back in 1963 — at the same time as the arrow-version. 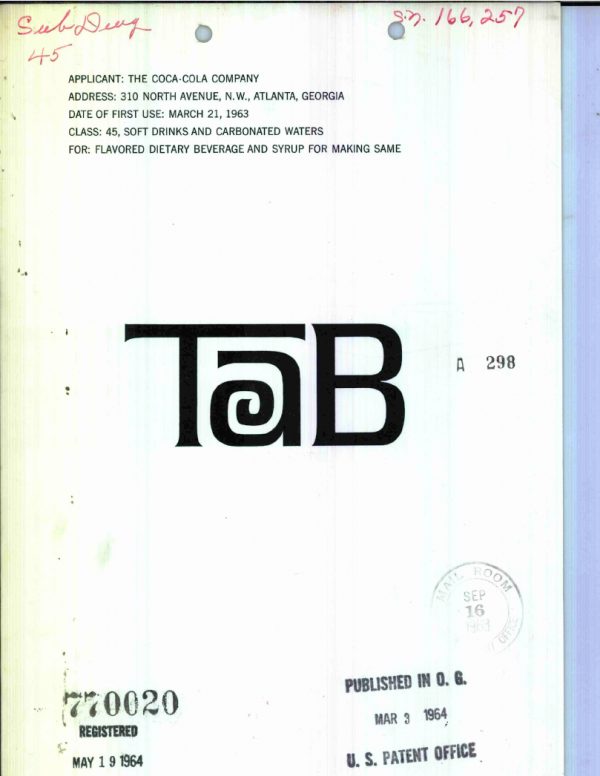 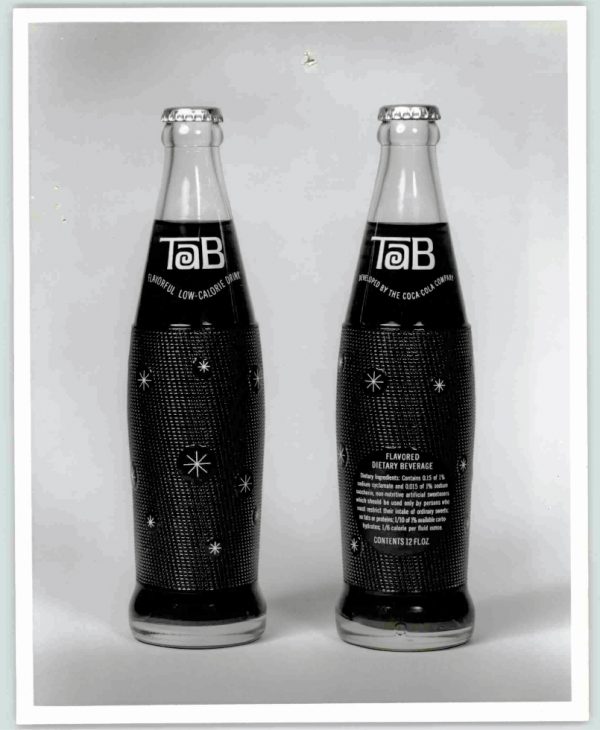 It’s not clear whether these no-arrow bottles were ever widely produced. Although there are other examples of early Tab logos without the arrow, most of the pre-1970 TaB ads include the arrow version. 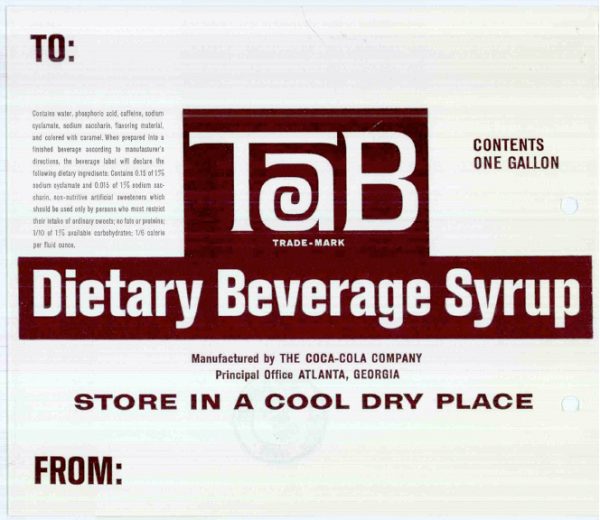 Although, I must admit, I like this version also.