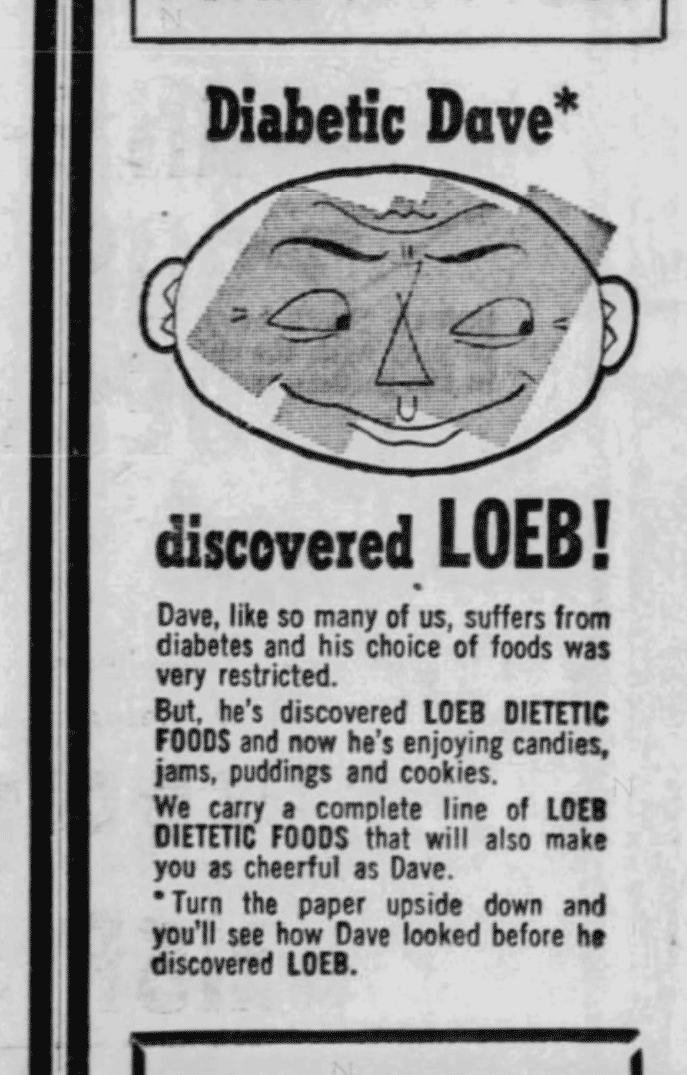 While researching the previous post, I happened to find another of these goofy, optical-illusion illustrations. Loeb Dietetic Foods published it an a series of newspaper ad that ran from 1954 to 1962.

Typically, a “topsy-turvy” face relies heavily on facial hair. Eyebrows become mustache. A full head of hair becomes a beard. They draw the mouths to also serve as forehead lines, furrowed brows and the like. The eyes, they place conveniently in their correct anatomical positions. (This way they, at least, remain eyes, although they might wind up looking in a different direction when rotated.)

Turn that (Diabetic) Frown Upside Down

Eugene Loeb incorporated his NYC-based Loeb’s Diabetic Food Bakery in 1913. The company changed its name to Loeb Dietetic Foods, in 1929. They did this to comply with new U.S. food regulations disallowing the use of the word “diabetic” in product names. Clearly this did not stop them from mentioning diabetes in their ads. And, indeed, their products were often sold in pharmacies and advertised alongside of insulin and syringes.

In the mid-1950s (like other companies that have used this “topsy-turvy” device) Loeb sought to make their “Diabetic Dave” mascot into a fun, transformative symbol of product satisfaction.

Dave, like so many of us, suffers from diabetes and his choice of foods is very restricted.

Turn the paper upside down and you’ll see how Dave looked before he discovered LOEB.

Personally, I feel that the “unhappy” version of Diabetic Dave is less successful as a face. We’re supposed to see a character that looks a bit like a tanned, mustachioed Stewie Griffin.

But it’s hard not to just see the original “happy” face upside-down. The smiling mouth and triangular nose do not work well as alternate facial features. In my opinion.

Of course, this kind of illusion is not easy to pull off. Like ambigrams, very few of these dual faces are ever equally legible. (See also: Ambigram Branding)

Who created the “Diabetic Dave” illustration? I haven’t been able to figure that one out, but I did find one other illustration that I suspect was drawn by the same artist… 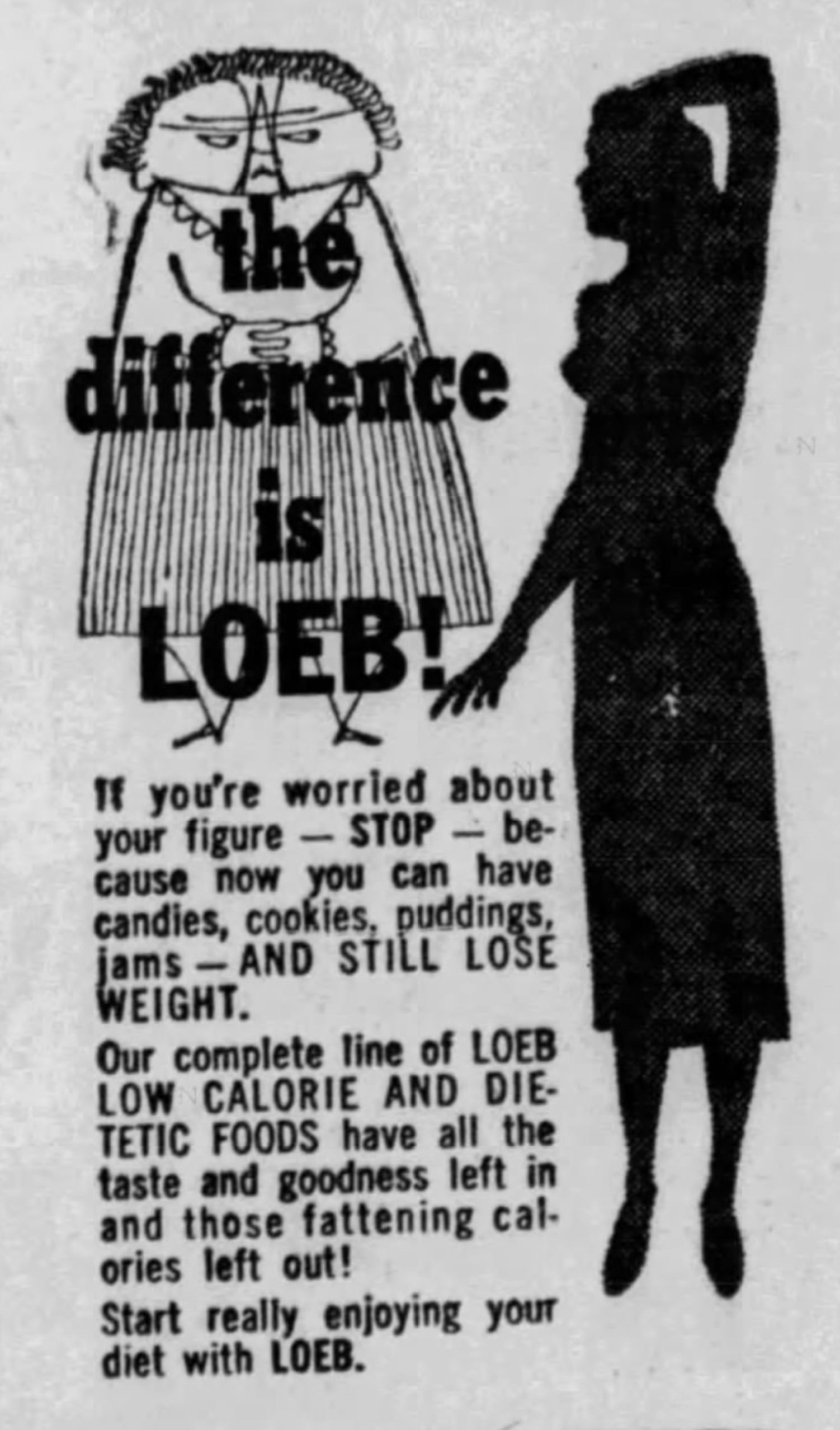 If “Diabetic Dave” followed a 1950s trend towards product mascot caricatures that gently mocked their customers, Loeb’s envious fat lady may have crossed the line.

The company placed this ad in newspapers during the same time as their “Diabetic Dave” campaign. Clearly they ran these dual campaigns in an effort to target two different constituencies: “diabetics and overweights” (their words, not mine.)

The artist gave his Loeb Lady a similar head shape to “Dave” and similarly abstract facial lines. He also gave her a triangular frown and angry, envious eyes as she looks upon the silhouette of an idealized female figure.

the difference is LOEB!

If you’re worried about your figure — STOP — because now you can have candies, cookies, puddings, jams — AND STILL LOSE WEIGHT.

Our complete line of LOEB LOW CALORIE AND DIETETIC FOODS have all the taste and goodness left in and those fattening calories left out!

So much of advertising is a good-cop/bad-cop routine. First you browbeat your customer with the “problem.” Then you offer your “solution” to their problem. The overweight Loeb Lady, however, as an illustration of the problem-to-be-solved, strikes us as too… well, ham handed.

So ends our second post for Diabetic Branding Week. (I know it seems like an unusually long week, but keep in mind we’re on Diabetic Daylight Saving Time.) Anyway, there’s more to tell about Loeb Diabetic/Dietetic Products so may return to that subject. Or not.